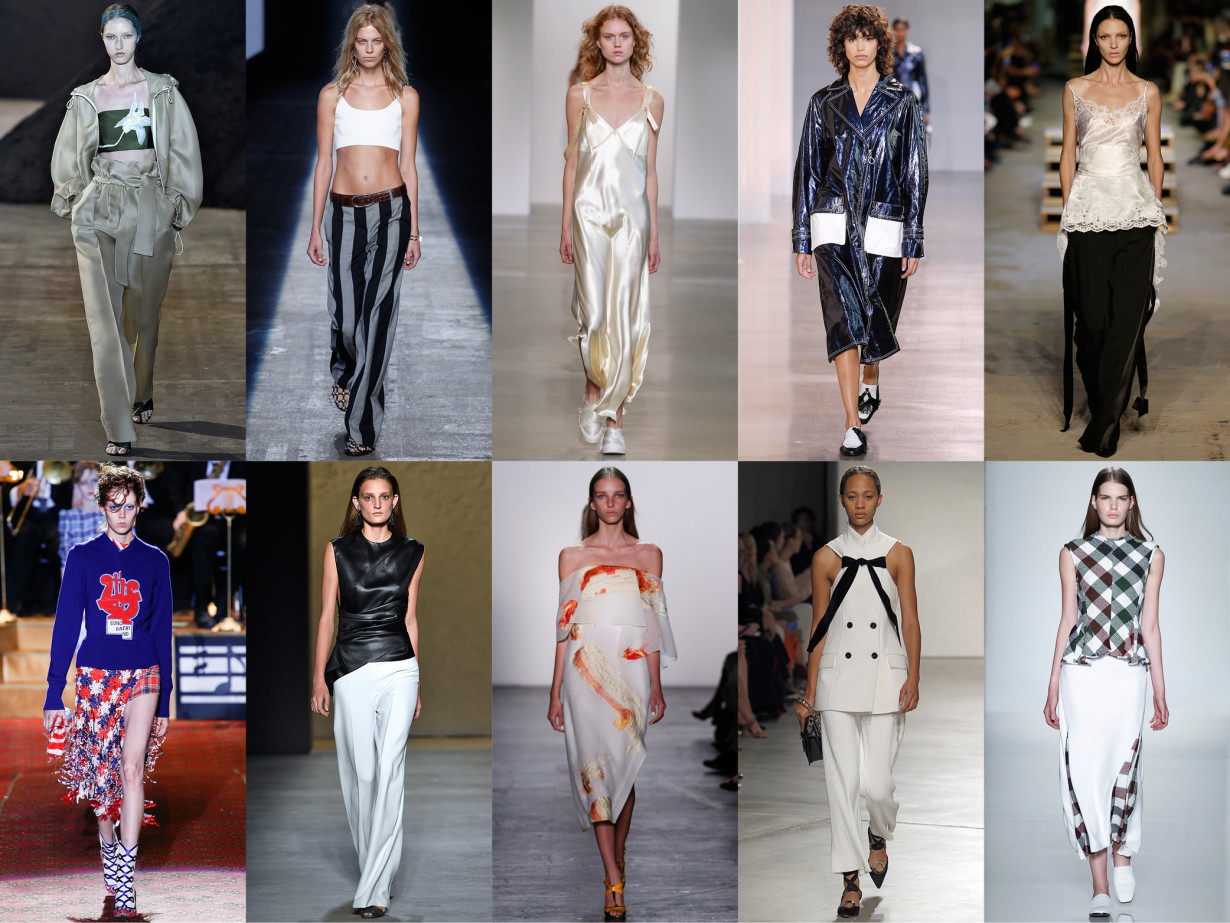 It was a season of commemoration and celebration at the Spring 2016 shows in New York, as designers marked anniversaries, looking both back and ahead, in a refreshing reminder of the continuing strength of American fashion, as shown by our fashion director Alastair McKimm’s picks of the top ten collections. The big news of the week was Givenchy’s move to New York, which landed on the fourteenth anniversary of 9/11 in Riccardo Tisci’s tenth year at the house, with an intricate, delicate, and inspired outing that offered the potent combination of dark romanticism and feminine strength the designer has always found himself drawn to. Alexander Wang and Phillip Lim both also celebrated their tenth anniversaries this season, two days apart in the same cavernous warehouse floating on the Hudson. Wang offered his signature edgy sportswear with a wealth of injected influences, and Lim, working against a backdrop of mounds of earth by Maya Lin, offered a serene ode to nature and the beauty and delicacy of flowers.

Danielle Sherman’s environmental focus at Edun—a key part of the brand’s DNA—was more about the construction than the concept, reimagining the bold graphic prints and handiwork of ceremonial costumes from the Kuba in Central Africa as bright, clean sportswear produced in an ethical and sustainable manner. Prabal Gurung went back to his roots in Nepal, opening his show with a group of monks chanting before he presented his gorgeous collection of floaty, paint-swashed, vibrantly hued dresses.

Francisco Costa sent out shimmering, romantic dresses that had a Nineties appeal at Calvin Klein, oversized with a winning coming-apart-at-the-seams quality that was a refreshingly different turn for him. Narciso Rodriguez, another arch-minimalist, offered looser, flowier silhouettes that added a lightness to his strong structures, sharp lines, and bold palettes. Spliced-up surf prints infused the colorful, shapely pieces with a sporty appeal at Victoria Beckham.

Hints of Spain could be seen in Lazaro Hernandez and Jack McCullough’s designs at Proenza Schouler, in the bullfighter red, the fluttering ribbons, the pockmarked pristine white lace, and, most brilliantly, in the ruched ruffles that edged and skipped across several pieces. Closing out the week in an appropriate manner, Marc Jacobs took his sense for the theatrical to the limit, riffing on silver-screen tropes through the decades, from Depression-era glamour girl to Fifties pin-up, as the band played across the stage at the grand, glamorous old Ziegfeld, a fittingly all-American send-off to European shores.