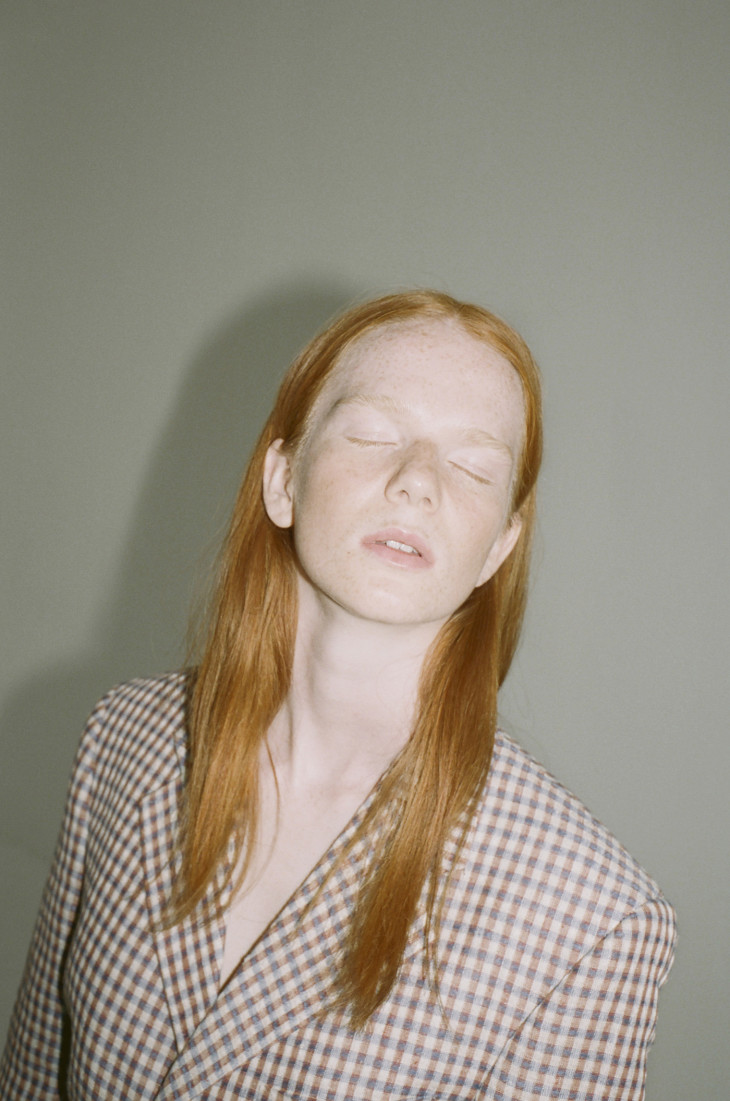 All clothing throughout by Bode.

Hidden in an unassuming building in Chinatown is a treasure trove of material, an abundance of distinctive fabrics crammed wall to wall, all sourced from around the world. Each of these pieces carries a story, rooted in history or politics or culture, but they remain dormant, hidden from fashion and relegated to remnants of forgotten stories—that is until Emily Bode breathes new life into them. This studio is home to her menswear label Bode, for which the 29-year-old re-contextualizes these fabrics into unique pieces, forming collections that have earned the attention of every buyer, editor, and shopper in the world of fashion.

Bode took an interest in fashion from an early age and even then had already developed a fascination with vintage. “I was always drawing dresses and taking sewing classes,” she recalls. “I grew up antiquing with my mom and all of my aunts, so acquiring antique textiles and children’s toys and objects was a huge part of my life.” Though she was raised in Atlanta, both of her parents are from Massachusetts, so Bode often spent time in New England, the influence of which still shows up in her collections. She ultimately ended up in the Northeast when she moved to New York, where she entered the fashion program at Parsons (and concurrently received a philosophy degree at Eugene Lang). Menswear only became the clear path towards the end of Bode’s sophomore year, but it had always aligned with her sensibilities. “I’ve always collected antique menswear, vintage menswear,” she explains. “I probably wear mostly men’s clothing myself. It was always this idea of designing for the other, not designing for myself, and even growing up I always dressed my friends. I had a love of putting worlds together. It was creating an environment that was reflective of myself, but it was for someone else.” Bode built her label—still just a few seasons old—around reconfiguring classic menswear shapes from different eras. While much of the appeal is in the brand’s use of uncommon textiles, it presents an opportunity for her to introduce different narratives into fashion. “To me looking at all of these domestic textiles and bringing it into the fashion sphere, it’s less about the fact that they are vintage and more that they have a whole history to them.” Khadi, for instance, is a material prominent in the Spring 2019 collection. The appeal for Bode wasn’t the age of the material, but rather its history as a fabric hand-spun by Indians who, led by Mahatma Gandhi, saw it as a way to boycott foreign cloth and maintain independence. “I always wore vintage and bought vintage because it had something that other clothing didn’t have,” Bode adds, “and it was this intangible value that was hard to put your finger on, but it just made it better.” The designer believes it’s the reason so many people are attracted to vintage and why Bode resonates within fashion: “People are drawn to vintage because of the stories there. You know that it had a life before and you can feel that. Its rarity is a huge aspect of why we have certain clients that shop our brand and why a lot of people that buy vintage also buy us. You have one and that’s it.” For each season, Bode can begin with anything from an interesting textile to a personal story which she will design the collection around. “Some of it is dictated by a specific color and some of it is the overall identity of a person,” she elaborates. “That will help me dictate the sourcing of the vintage, the antique textiles. It goes both ways. We don’t approach the season each year with a mood board of textile swatches.” For Spring 2019, Bode explored the ancestry of a frequent collaborator, the artist and furniture designer Aaron Aujla, and sought to evoke the resulting identity that developed using textiles like khadi. “It’s the history of the artist Aaron Aujla’s family coming over in the Twenties—his grandfather came over—and coming over again in the Forties,” she explains. “It’s like tracing the identity of Aaron himself, going to India as an Indo-Canadian but feeling like a tourist, so we have souvenir shirts from the Eighties that say ‘India’ on them. We designed that to reflect something you would find on the streets of Kolkata, and also so you knew you identified as a tourist even though you are Indian.” “The philosophy of the brand is you buy into your wardrobe as you buy the objects for your life,” Bode says of her customers, most of whom would rather spend their money on something distinguished and enduring over something that will lose its appeal after a short time. “If we were doing more of a trend-focused menswear brand, our lapel would be changing every season or our button sizes. Things would feel dated looking back, and the goal is to not have it feel dated.” Instead, Bode is establishing its identity as something outside of mainstream fashion, more in line with the way its customers want to dress. “When we first started, people were like, ‘Well how is it going to change from season to season?’ But how much does Ralph change season to season? People are obsessed with new images, but if you have a really good, strong product with a strong identity, people do iterations of that, and it’s just as refreshing and new. The men that we dress aren’t changing their look every season.”