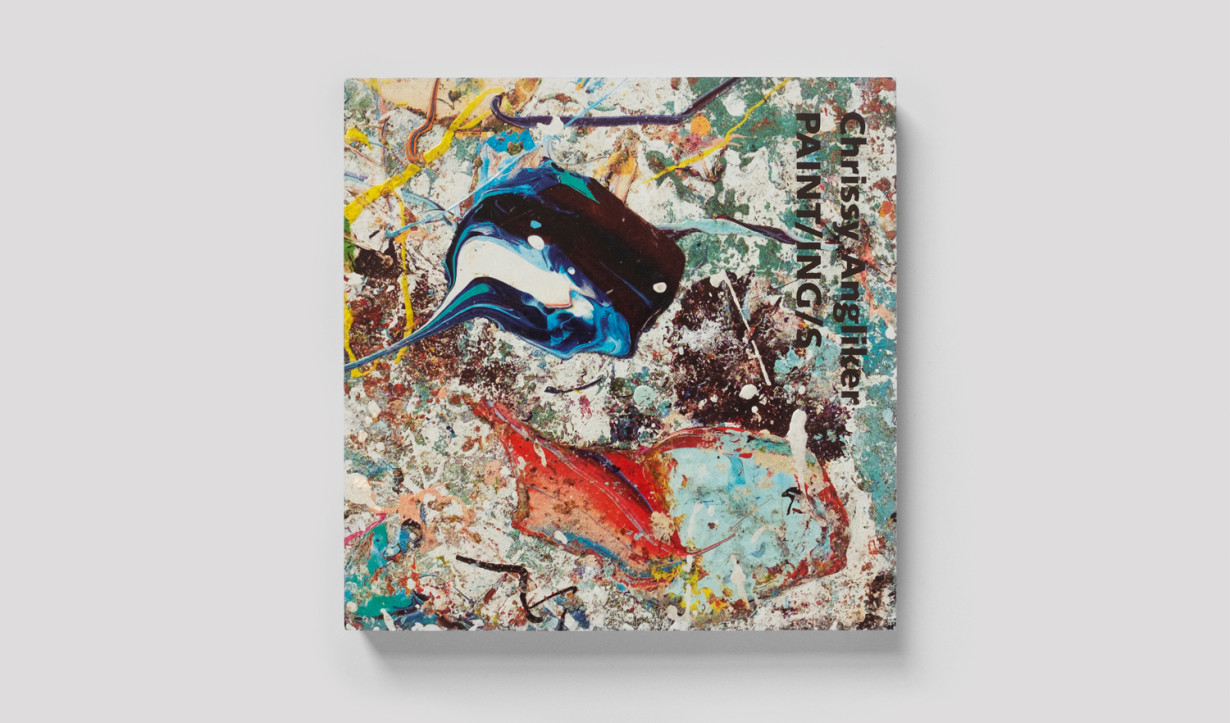 When Chrissy Angliker describes her work, it is through a terminology better associated with linguistics than æsthetics, dealing in phrases like ‘information,’ ‘dialogue,’ and ‘vocabulary.’ Indeed, her visceral brushstrokes take on a dialect of their own, copiously daubed on the canvas by surged splatters and spoons with an instinctive urgency that yokes representation to abstraction. Angliker calls this junction “the line between control and chaos,” surely the lifeblood that characterizes every element of her practice, from the vigilant preparation of her Brooklyn studio, to the paintings it calls into being, not forgetting the reflexive gestures of the process itself. Hers is a world of bountiful limitation, impelled by the prospect of freedom, but cautious to completely let go of the reins. Her new published edition, PAINT/ING/S, affords a proximate appraisal of the conflict, instituting boundaries only to break them, resulting in the vivid lyrical expressions we have come to know as Angliker’s trademark.

“It may not look like it when you look at my work, but I am actually very much a perfectionist and kind of a control freak,” Angliker admits, her reflections relayed with an interested objectivity that speaks of a healthy understanding of her expression. You could say the artist was a prisoner of her own making, craving the discipline of her own control, but the little freedoms she allows herself within the remit of restriction are what results in a remarkably rich tension, a tug of war playing out between two critical torments. Despite the wild disruption of her compositions, there’s a time and a place for boundaries. Before power can be relinquished, the canvas is primed, surroundings arranged just-so. A charcoal sketch supplies a realistic guideline—though its instruction will soon be undermined—and Angliker engages in a walking meditation before the insurgence begins. It’s traversing the studio floor that provides an inexhaustible source of inspiration—a carpet of uncalculated spills and a souvenir of her surrendering to a subliminal state, embossed on the cover of this tome as a testament to the visceral nature of the artist’s practice.

At a base level, the repetitive routines refine technique, of which there are many, particularly when brushes are resigned to redundancy; she drips and slings medium-bodied acrylic, spoons on marbled blobs with a brave hand, her only gesture to moderation the ratio she gouges from each plastic cup of color. Once it’s on the canvas, it’s out of Angliker’s control—or at least out of inhibition’s reach.

Still, even in this unfettered approach, there remains margin for error. “That’s when I’ll think, ‘Ooh, there’s a little too much of that here,’ and react to the marks,” she says. “I’m really trying to have a fifty-fifty relationship with the paint. My movement is really important. Half of it is going to distort, so I have to try really hard to be as clear as possible with the information I’m giving to it.” The ritualistic patterns of Angliker’s approach prove useful in less tangible terms, bringing to light the urges and impulses that lay dormant in the subconscious. “Breaking the process, or being able to know when to pause when so-called ‘mistakes’ happen—that’s when you know when there’s a rabbit hole worth following,” she explains. And that’s just how her latest methodology came into fruition, tendering the swollen strokes of her “Bodies of Water” series of paintings, which provides the central subject of the book.

“I took a monthlong break from painting because I had a show in Switzerland and couldn’t paint during that time,” Angliker recalls. “When I came back to New York, I was like, ‘Ok, let me just warm up’, and did these small little brush paintings—something completely different—and they turned out totally…just…gross. We were not on the same page at all.” Out of frustration, she catapulted paint onto the canvas with a spoon, “And there it was!” she beams. A new beginning born on the brink of defeat. The communicative command of her style owes much of its power to the duality of the artist, caught between two cultural identities, growing up in Greifensee and Winterthur, Switzerland, before moving to the United States at sixteen, living and working on the East Coast for another sixteen years.

“It was extremely important for me to show my paintings in Switzerland because I felt they would understand the vocabulary. I paint in English, but I have a very Swiss accent,” she begins, smiling as she rationalizes the eccentricity in her observation. “It sounds weird, but I swear it’s true. It goes back to when I first started painting with my mentor, Juri Borodatchev. His paintings were painted in Russian. He had everything in it—the undertones of melancholy in the brushstrokes. Not in a cliché way, but in a really deep, visceral, cultural way that just rubs off on you. I feel like I’ve had so much Swiss-ness rub off on me that that’s always going to be in my paintings. The thing with America is that the attitude has rubbed off on me too, so I have this mixture in my language, but deep down, the mother tongue is that of Switzerland.” And so it might be, but it’s a merit to Angliker’s self-scripted abandon that her visual vernacular defies the logic of grammar, making herself understood by a means that transcends mere words.