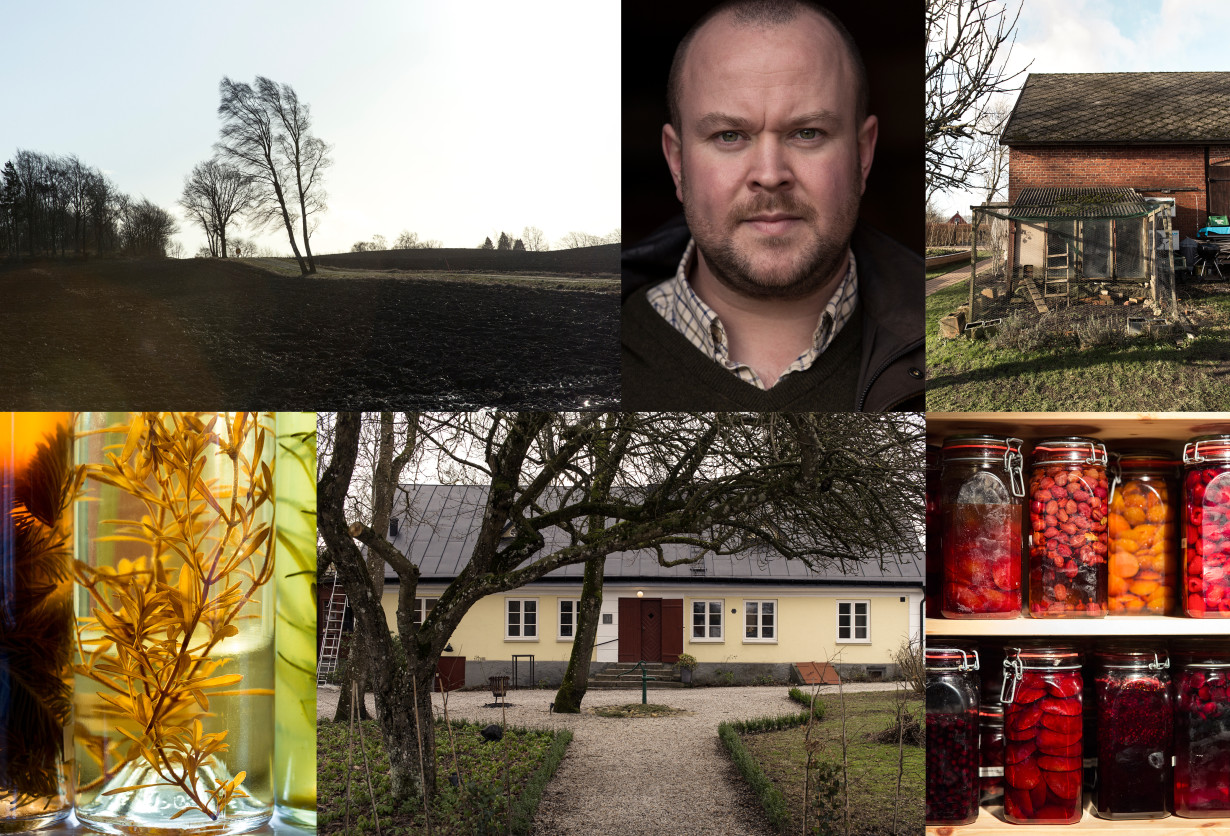 What kind of chef aims to seat fewer people? Removes seats from his dining room and closes his doors for months to tear down what his eponymous restaurant used to be—conceptually and sometimes literally—in order to reinvent his menu and his outlook on what a restaurant should be?

And then, if nothing comes, if nothing inspires, completely closes his doors and walks away?

Daniel Berlin’s restaurant sits on the southern tip of Sweden in the truly small town of Skåne-Tranås. It’s part accommodation, part internationally acclaimed restaurant, and part culinary playground for Berlin, who has made his name crafting perfectly plated, deeply local food that he grows, forages, and hunts for himself on the grounds surrounding his establishment.

“You have to like to work, here,” Berlin says. “When you work in my kitchen, it could be working two hours in our garden, or painting the roof, or butchering a whole deer on a hunt. You have to be open to everything.”

His head chef, Erik Andersson, has been with Berlin for twelve years now and, at the moment, is painting the roof of the restaurant in preparation for this year’s reopening in March. “To be honest, now is the hardest time of the year,” Berlin says. “It’s so fucked up, because I’ll wake up in the night and I have a piece of paper and a pen next to the bed when I wake up. I’m sweaty and pale and I get an idea and I have to write it down because if I fall asleep, I’ll forget it.”

Successful restaurants run on repetition. Like a professional play, minor variations keep the show interesting, but consistency is the absolute mark of excellence: Is the steak—or local boar—cooked to temperature every night? Have the vegetables and assorted produce been cleaned properly? Is the presentation as artful and nuanced as the night before? Berlin’s approach—constant, annual change—may buck the common received wisdom, but it’s a spirit that, perhaps secretly, dominates any young, ambitious chef. How do you evolve? How do you become a better chef?

For Berlin, success is in the details. He’s obsessed with noticing the small changes, the minor adjustments to dishes he’s already perfected or has yet to master. “We’ve learned that if you show chefs how everything is produced—vegetables, meat, or fish—if you teach them how to take care of everything, they care so much more when they’re cooking in the kitchen.” There is a broad concept of “Nordic Cuisine”—a culinary label and philosophy which has recently come to the fore—which now includes Berlin and his restaurant. It is based on the ideas of foraging for unique produce, hyper-seasonal ingredients, and a near-obsessive focus on locality. In reality, this is how most food—most memorable food—is made: Find ingredients that speak to where you are and cook them with care, nuance, and simplicity. It’s not Nordic, to Berlin. It’s how he’s been cooking his whole life: “If you travel to my restaurant, I want you to feel that you are in the south of Sweden. For me, that’s really big,” he insists. “If I travel to you, I want to eat what you have. I think that’s interesting. We have great seafood in the north [of Sweden], but here we can’t have good-quality shellfish or scallops or whatever. So then we choose not to use them. It’s not a problem. If you don’t have the best scallops, don’t use them—it’s so simple.”

Instead, Berlin has cultivated a remarkable sense of terroir. There is a terroir to Berlin’s cooking that includes the small manmade garden attached to the kitchen and the acres of natural forest that surround it. This way of cooking introduces a sense of chaos—on any given hunt, Berlin may return with a small catch or, worse, nothing at all—but it’s the reality that he’s happy to inhabit: “If you want to have the best produce, if you want to work with wild game and vegetables, then you have to be prepared not to have them all the time. And that’s ok. I think that’s ok.”

Right now, Berlin’s kitchen is just five strong, with a small group of stagiaires—the culinary version of interns—that are there to learn and to cook. It’s the perfect size for Berlin, who sees his restaurant as a place for customers, family, and staff alike. “I think it’s about how you treat people. I always say that if people don’t want to come back, then we haven’t done our job.”

As much as there is a mild surge of activity around the restaurant, what with Andersson painting the roof, a new menu that keeps Berlin awake at night, and the potential of new reservations on the horizon, the hunt is still very much a calming and essential component of Berlin’s path as a chef. “Sometimes I really like to hunt by myself,” he says. “You understand how an animal works—they’ve seen you, smelled you an hour before you’ve seen them.”

Berlin has a hunt—the last of the season—on the horizon. It’s a larger hunt involving several parties, dogs, and a variety of guns. The chef might not admit it freely, but these excursions seem as much a way to gather much-needed provisions as they are a way to commune with the land, flora, and fauna that have provided his own well-being. “It can be amazing, when you’re standing in the forest by yourself and then you have, ten meters from you, a big deer coming up,” he remarks. “You know, it can be really special. Sometimes you forget to shoot at all.”