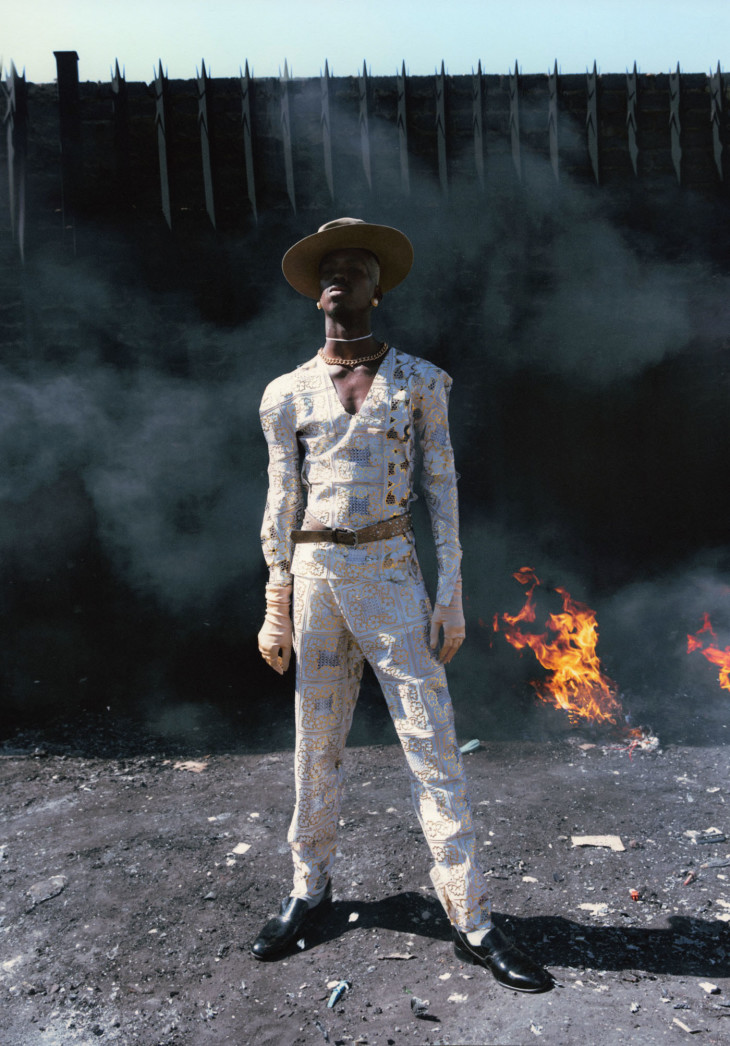 All images courtesy of the artists and CFHILL.

What is the future? Creatives, as a whole, tend to be dreamers who have visions of the future that others couldn’t even begin to conceive of. One such conception comes courtesy of Kristin-Lee Moolman, a fashion photographer from South Africa, and Ib Kamara, a stylist and costume maker originally from Sierra Leone, a duo casting revolutionary waves through the fashion world thanks to “2026,” their series of bold, utopian images of African men in a place, and time, where race and gender fall by the wayside in favor of personality and expression.

Styled by Kamara and shot by Moolman, the project breaks down the status quo when it comes to sexuality and fashion—Who said heterosexuality had to be the norm? Who laid down the rules of what men and women were meant to wear?—and instead replaces it with a ‘new normal’ that seems quotidian in the parallel universe the subjects gaze at us from. In “2026,” each of the models, all friends of Moolman’s, wear what they want when they want: shredded denim, bubblegum-colored cowboy hats, or leopard-print bodycon, on the street, on a front lawn, or in the carpark. The juxtaposition between their world and ours sends a frisson down the spine.

The duo connected in 2015, when they started following each other on Instagram. The first time they met in real life was when Moolman picked Kamara up from the airport in Johannesburg for his month-long residency to work on “2026.” Looking at their work, it’s hard to believe they’ve known each other for less than two years; there’s an energy that pulses through it that feels like they’ve known each other since childhood. For Moolman, this synergy comes as no surprise. “I feel like we have a very similar point of view on various things, as well as being open and receptive to new stimuli and ideas from each other and our surroundings,” she says. Kamara only graduated from Central Saint Martins last year; “2026” was his final-year project, and is currently on show at Stockholm’s CFHILL in an exhibition curated by Eytys brand founder Max Schiller. Much of Kamara’s influence comes from his work assisting Barry Kamen, of legendary Eighties styling collective Buffalo, from whom he learned that “there’s no one way to styling or creating an image. [Styling is] about your story—a feeling, innocent, carefree,” he has said. For “2026,” he didn’t call in clothes from big brands; rather, everything was thrifted. Emailing from Paris, he explains: “I wanted to immerse myself in the environment fully, so for me the best place was the market, that’s where the real people go to get a daily living. I get a feeling of excitement having conversations with locals and getting to to know the guy at the local thrift store and seeing what he wears, how he wears it, how he wears his hats, all these things inspire me. The thrift shop scene is very exciting for me in Johannesburg as people buy things that they love, and not for the love of the brand.”

Indeed, “2026”’s strongest moments come from its ability to reverse the African gaze and to challenge stereotypes within Africa, and also all over the world. The two could be considered a part of the ‘New Africa’ movement—explained by Kamara as “a moment and a movement of Africans telling African stories, and being very honest about it. It’s beyond styling, it’s a conversation, it’s liberating, and it’s pushing new ideas out that would have never been talked about otherwise.”

What’s also powerful about the duo’s imagery is that their visions of the future are never presented as hypotheticals; instead, each subject is normalized and empowered within the universe created for him, as if this future is not just predicted, but expected. This sort of imagination is important, Moolman says, because it allows us to see what we aspire to, and “to work to facilitate the kinds of changes we as a global society would need to make to provide ourselves with a better future.” When asked what their ultimate utopia is, though, Kamara has the answer: “The dream is equality—real equality and not just a surface concept—[and] an existence free from discrimination and policing.”

All images courtesy of the artists and CFHILL.