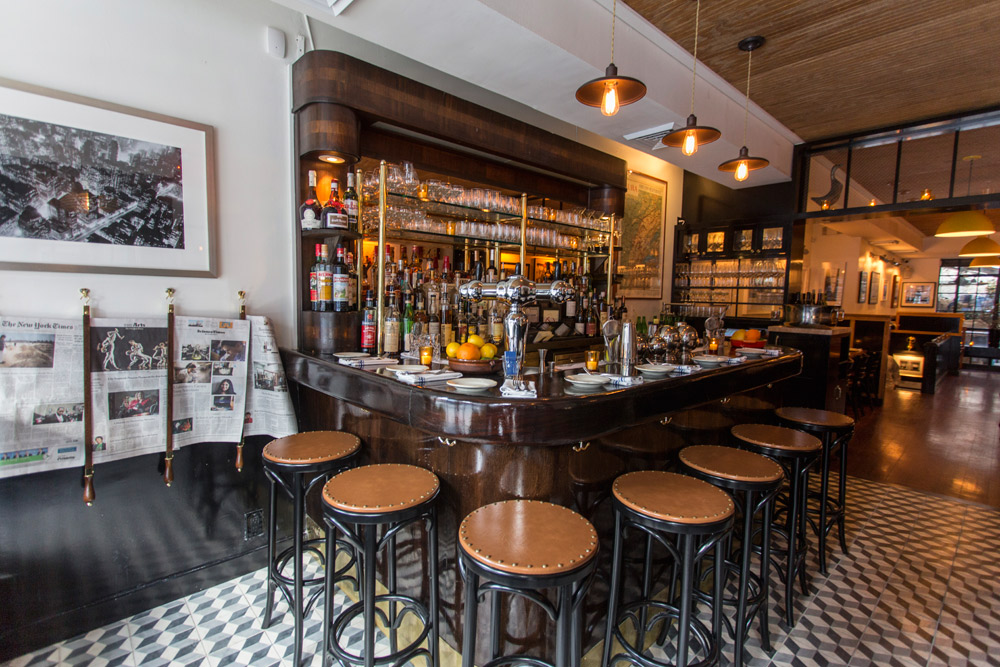 The name pays homage to one of the first restaurants Stulman worked at, Cafe Montmartre in Wisconsin, as well as to one of Paris’ most adored neighborhoods, reflecting both the spot’s current and former incarnations. “This used to be a French restaurant, La Gascogne, which operated for twenty-five years,” Stulman says of the Eighth Avenue location. “The space has charm, it has the original bar, pane-glass windows, one of the most amazing gardens in the city, and it’s in Chelsea, where Tien wanted to be.” The skeleton of La Gascogne has been given Stulman’s golden touch. Wood benches flank the perimeter of the space, black-and-white photos are juxtaposed with colorful contemporary art, and a mix of oldies and hip-hop plays through the speakers. Every aspect of the restaurant has been carefully curated, reflecting the attention to detail that has made Stulman’s other restaurants such standouts in a dining scene that has become increasingly corporate.

Prior to his partnership with Stulman, Ho worked his way through some of the city’s most notable restaurants, including the now-shuttered Café Gray, Café Boulud, and the Má Pêche and Ssäm Bar outposts of the Momofuku empire. “Previously, I was part of such a great company, but I always knew that I wanted to grow on my own. It was never that I wanted to make a name for myself, and it still isn’t. It’s about surrounding yourself with the right people,” he says. That right person happened to be Stulman. The pair got to know each other over the duration of a year before setting the wheels in motion to open Montmartre. “It’s never on your own. It takes so many people to put a restaurant together,” Ho remarks. “That’s something I’ve always had a problem with-the singular approach. Saying that, Oh this chef did all of this. I know it’s natural to credit one person, but it’s too often that it’s forgotten that it’s such a team effort.”

Though French in name, the menu at Montmartre is decidedly multi-cultural, drawing inspiration from Southeast Asia and Northern Africa. A side of roast cauliflower with favas, spiced with cumin, is flavorful enough to transport you to a bustling medina in Morocco. Crispy rabbit torchon is highlighted with delicate pea tendrils and an unusual, albeit superb, violet mustard. Ho’s crispy broccoli rabe, a gentle nod to the kale chips which popularized the city’s menus in 2012, is a bed for a delicate branzino, flecked with pickled lemon. For dessert, it’s best to ditch your Francophile streak and stick close to Ho’s Vietnamese roots. with a subtle and lightly sweetened coconut rice pudding draped in caramelized banana and jackfruit.

The references may be diverse, but Ho’s vision for Montmartre is clear. He has taken each dish into careful consideration, to the extent of revising the menu after only the first five weeks. “For us in the kitchen, it’s all about execution of the food. It’s about doing the best we can, every single night. You want someone to put a bite of food in their mouth and get that visceral reaction,” Ho says. This mantra holds true to the very end of the meal, when a salted caramel is placed alongside the bill.

“If you boil it all down, what we’re trying to do is make somebody smile. I put my life’s energy into making someone smile. Isn’t that fulfilling?” Stulman asks rhetorically. “It’s about working with a group who has the same goals, continuing to critique ourselves and constantly improve. I want that bite of food, that glass of wine, even the right type of ice in a cocktail to make someone think, Wow this place is gorgeous. If people smile, they’ll keep coming back. And you want people to come back so you fill up your place. So, that’s the goal, make people smile more every day.” At Montmartre, that certainly won’t be a problem.