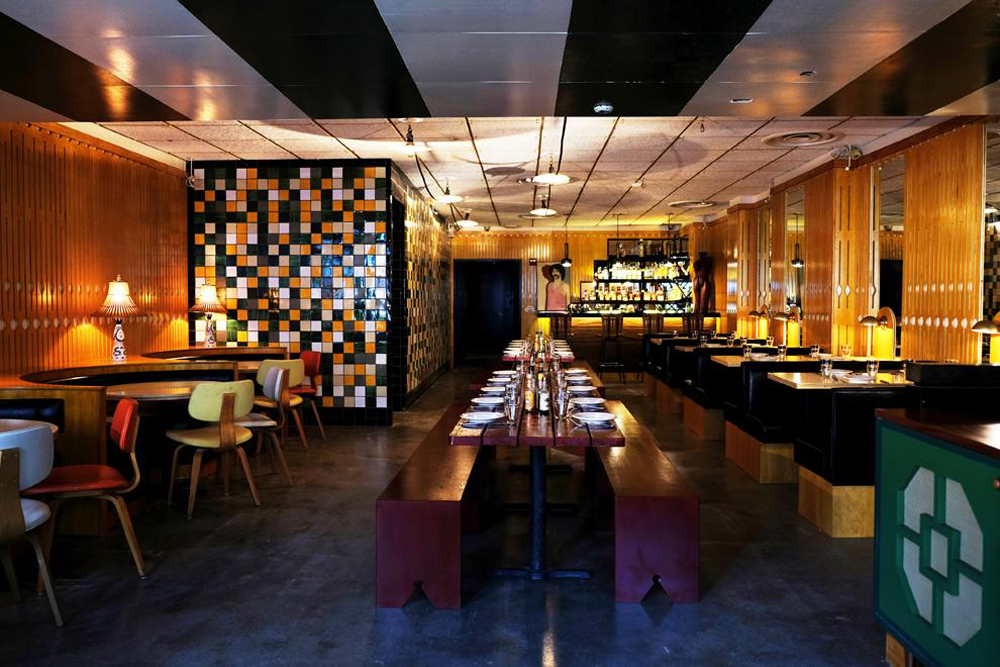 MEXICAN FARE FROM THE INDOCHINE TEAM

Expert restaurateurs Jon Neidich, Jean-Marc Houmard, and Huy Chi Le know a thing or two about opening a sensational space. With extremely successful ventures like Acme and Indochine under their belts, it was only a matter of time before they tackled their next project, this time in the form of a Lower East Side Mexican lounge aptly titled Tijuana Picnic.

Inspired by Mexico City during the late Seventies and early Eighties, the team set out to create something more than the run-of-the-mill cantina. Entering the space instantly transports visitors to a place both retro and modern. Diners won’t see hanging peppers or sombreros covering the walls, but instead elegant details that work together to give warmth and life to the environment. Sleek brass lighting fixtures and sculptures, including a particularly spectacular bull that graces the bar, offset the casual picnic tables that lie down the restaurant’s center, and a clean, bright tile wall perfectly contrasts a custom wood-paneled one across the room. Houmard explains, “Our idea was not to do the kitschy idea that Americans have about Mexican restaurants and Mexican food, but instead to create a space that would be enjoyable after many visits. We used vintage images of bars in Cuba to create a retro feel that is warm at the same time.”

Downstairs, diners will find an equally stunning space, featuring aquas and blues instead of the warmer colors found upstairs. An incredible mural by French street artist Remed spans the entire back wall of the space and a resin-covered wood bar, made in the style of a vintage surf board, greets visitors as they enter.

The kitchen is led by chef Alex Lopez, who grew up in Mexico City then moved to New York when he was eighteen. He cooked through kitchens around Manhattan, eventually ending up in now-shuttered Kittichai. The influence of the beloved Thai spot can be seen throughout the menu at Tijuana Picnic, where Mexican dishes are executed with unique ingredients, many of them classically Asian. Lopez explains, “It is Mexican with a little bit of Asian. We don’t want to call it Asian fusion, because it’s not—it’s just Asian ingredients used in a different way.” Even with the utilization of Eastern ingredients, the menu is decidedly Mexican, and many of the recipes pay homage to Lopez’s childhood in Mexico City. He explains, “Some of the dishes, like the corn and the crickets, are what I used to eat as a child. I took that idea and elevated it with the chipotle-coffee powder. When we went hunting, we would marinate the steak with beer. We took that idea here, added spices, and made it into something even more delicious.” When seated, guests won’t find the classic assemblage of hot sauce bottles centered in the middle of the table. Instead, they are dared to trust the chef’s judgment, which will not disappoint. The menu features a variety of different courses, all intended to be shared, as the picnic namesake implies. Guests may begin with any number of empezar selections, including two of Lopez’s specialties, both present on this section of the menu. The sopa de tortilla epitomizes Lopez’s mastery of both Asian and Mexican cuisines. Plump, soft pork dumplings float amidst rich, sharp broth, perfectly highlighted with cilantro. The filling of the dumplings holds its own against the intensely flavored broth, leaving the diner’s palate with just a hint of ginger. Elote asado, a dish strongly influenced by Lopez’s childhood, should also not be missed. Freshly steamed corn is rolled in a cricket aioli, then dusted with coffee-chipotle powder, and cotija cheese. The cricket aioli may be more for shock value than flavor, but the coffee-chipotle power more than makes up for it, adding a smoky depth of flavor that complements the sweet corn. Pinchos, or skewers, and soft tacos serve as the menu’s middle ground. Sample the former in the short rib, garnished with kimchi, or grilled shark varieties for the biggest flavor punches. The tacos come as a pair with a number of fillings. Fatty, rich tuna belly is one, garnished with an embarrassingly addictive avocado sauce. Large plates to share close out the menu, one of which being the formerly mentioned beer-braised beef of Chef Lopez’s youth.

Different than the team’s other ventures, Tijuana Picnic is a restaurant based on cocktails, as opposed to wine. Master mixologist Jim Kearns takes the reigns with ambitious recipes featuring tequila and mezcal. Sip on the Mi Hermano, the bar’s version of a Manhattan made with Resposado tequila, or go classic with the Mi Casa Margarita, this version combining mezcal and Blanco tequila.

Open late to serve drinks and food, the restaurant hopes to attract a casual, late-night crowd as well as regulars for dinner. Houmard notes the rewarding process of creating such a dynamic space: “It’s really the creative process that is fascinating. You start with a space that was something else before, then you knock it down and create a completely different atmosphere within that space, and for me it is very rewarding.”

Grace Seymour works in the food industry in New York City. She lives in Brooklyn and enjoys all things delicious and beautiful.