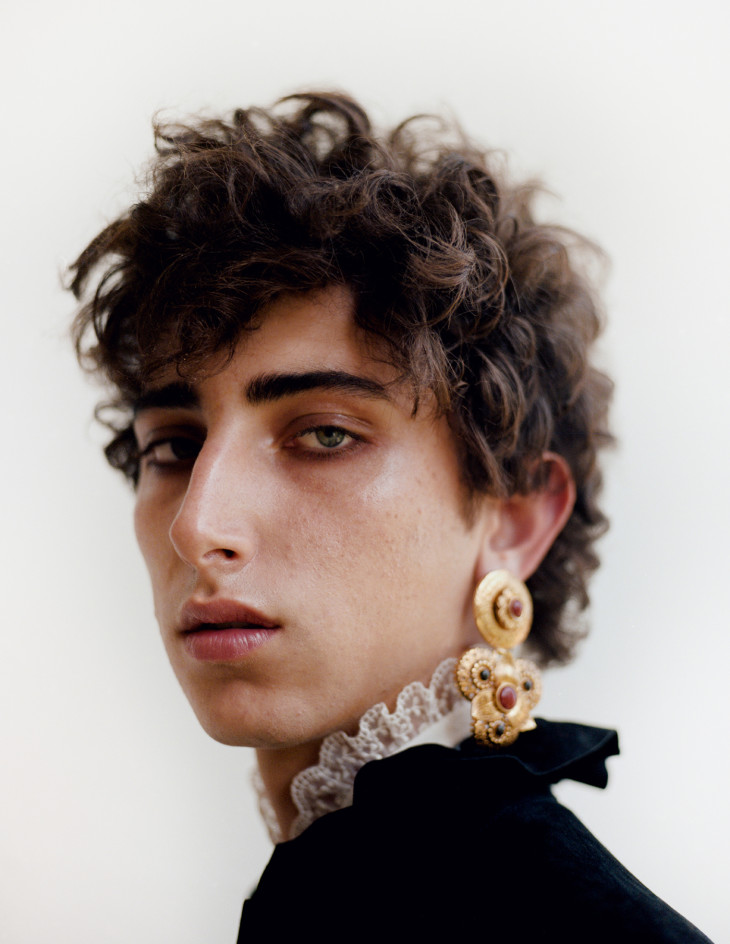 PALOMO SPAIN IS REMAKING MENSWEAR IN ITS OWN IMAGE

Alejandro Gómez Palomo refuses to be pigeonholed. So don’t bother describing his three-year-old label Palomo Spain in fashion’s overused buzzwords like ‘gender-bending’ or ‘androgynous.’ It’s not that he doesn’t identify with those terms—he just finds it embarrassing to even have to define ‘man’ and ‘woman’ in the first place. “My brand is about freedom and dismissing convention,” says the 26-year-old. “Freedom is deciding how or who we want to be. It’s also choosing to dress as we like and how to portray ourselves. This is about way more than gender conventions,” he adds. “It is about being yourself, enjoying yourself, and being fabulous.”

But let’s face it, it’s impossible not to talk about gender when it comes to Palomo Spain. The Spanish brand burst onto the menswear scene back in 2015 with its deliciously exuberant designs but was soon snapped up by both mens- and womenswear buyers from Farfetch, Opening Ceremony, and SSENSE. It’s since been worn by Rita Ora, Lindsay Lohan, Harry Styles, Miley Cyrus, and Beyoncé, in that viral Instagram announcement of her twins boys’ birth. (It was Palomo’s floral chiffon handiwork that made Queen Bey’s post all the more goddess-like and ethereal.) Still, it doesn’t take ten million Instagram likes to tell that everyone wants a piece of Palomo Spain. And no one gives a shit whether its menswear or not. In reality, Palomo says, eighty percent of his customers are indeed male. Granted, these men don’t exactly fit the archaic, cultural construction that society has created, a masculinity perpetuated in films, advertisements, and much more. But when exactly did it become so cool for men not to care? Why do masculinity and indifference to appearance go hand in hand? Not long ago, extravagant garments carried connotations of power: In the seventeenth century, Louis XIV tottered around in stacked heels, tumbling ruffs, and towering wigs. Half a century ago, even Sean Connery rocked a thigh-skimming, terrycloth romper. “Masculinity does not depend on the clothes you wear. It is a matter of attitude, as we all should know by now. It is how you act, how you walk, how you talk!” exclaims the designer. “I find it so old-fashioned that we still discuss it in such conventional terms.” Once you’ve seen the models in Palomo Spain’s shows, presentations, and campaigns, you’ll know exactly what he’s talking about. Whether honed and toned or blessed with boyish good looks, these male models have plenty of attitude (nothing screams BDE quite like a popped hip). And the clothes they wear—regal, ornate, and unapologetically flamboyant—have the sass to match. With freedom comes a lack of fear. It’s been clear from day one that Palomo didn’t care for fashion’s current casual climate. Since Galliano’s Dior days, the industry’s been yearning for a bit of historical opulence, references brought to life without commercial compromise, served without a side of streetwear. Palomo doesn’t disappoint; he goes big every time—think voluminous Tudor bubble sleeves and corseting, Cavalier plumes and frogging, and luxe fabrics like jacquard, velveteen, taffeta, fur, and feathers. All the while, he’s managed to avoid costume territory, making things modern in his own way, be it with a smattering of Seventies silhouettes or a hem slashed to flirtatious heights. And while Spring 2018’s hotel-themed collection (satin-clad bellboys and a bathrobe get-up complete with swan towel headdresses) were a sure sign the designer doesn’t take himself too seriously, Fall 2018 played with the connotations surrounding hunting, spinning the traditionally masculine sport into something titillatingly homoerotic. Spring 2019 was harder to pin down, with references spanning safari and colonial inspirations to Greco-Roman classicism and Medieval papal opulence—there were a few Oriental touches in there too. This season, the collection didn’t need a thematic crutch, because Palomo Spain is reference enough. In a few short years, the young designer has solidified his signatures and arrived at his own instantly recognizable æsthetic. The brand’s campaigns, however, have been recognizable from the start. A fresh nod to the kink of Tom Ford’s Nineties Gucci, they balance a blatant sensuality with artful, Renaissance-style depictions of nudity and a voyeuristic gaze with sophisticated shots and interesting angles. Fall 2017’s was essentially a grown-up Where’s Waldo?—spot the copulating couple far in the backdrop of luscious pastures and rolling green hills‚but it’s beautiful enough to hang on your wall like a watercolor painting.

Similar juxtapositions are present in Palomo Spain’s shows. The designer loves a bit of drama, but it feels authentic and fantastical rather than gimmicky. At the Spring 2019 show in el Museo Nacional de Ciencias Naturales in Madrid, guests were greeted with a small slide of Palomo’s blood, their place cards written in the scarlet stuff. It’s these kinds of peculiarities that have helped to reel in the fashion pack, even steering them away from traditional fashion week schedules to follow the brand from New York to Paris to Spain and back again. The show will settle in Paris now, its permanent spot there a clear sign of the brand’s success. Everything else, though, is Spanish through and through—from the factory-manufactured garments to the one-of-a-kind pieces created in his atelier. And it’s clear just from looking at every baroque heel on a patent mule or boot and every well-placed pleat on his impeccably cut pants that craftsmanship is incredibly important to Palomo. “I believe being one hundred percent Spanish-made adds value to my brand,” he explains. “I am proud of the industry in my home country and want to make people realize just how much artisanal and industrial activity we master here.”

It is, of course, tricky for such a new label to establish itself outside of the main fashion capitals, but there is the feeling Palomo doesn’t concern himself unduly with industry conventions. “I identified a similar young fashion scene in Madrid to the one I enjoyed during my school years in London,” he says, remembering the move after his graduation. But it goes deeper than that: “Spain had a stronger essence, it’s more relatable to my personal taste. It seemed more authentic to me.” It’s a small act of bravery, rebellion even, and it sums up Palomo Spain nicely.