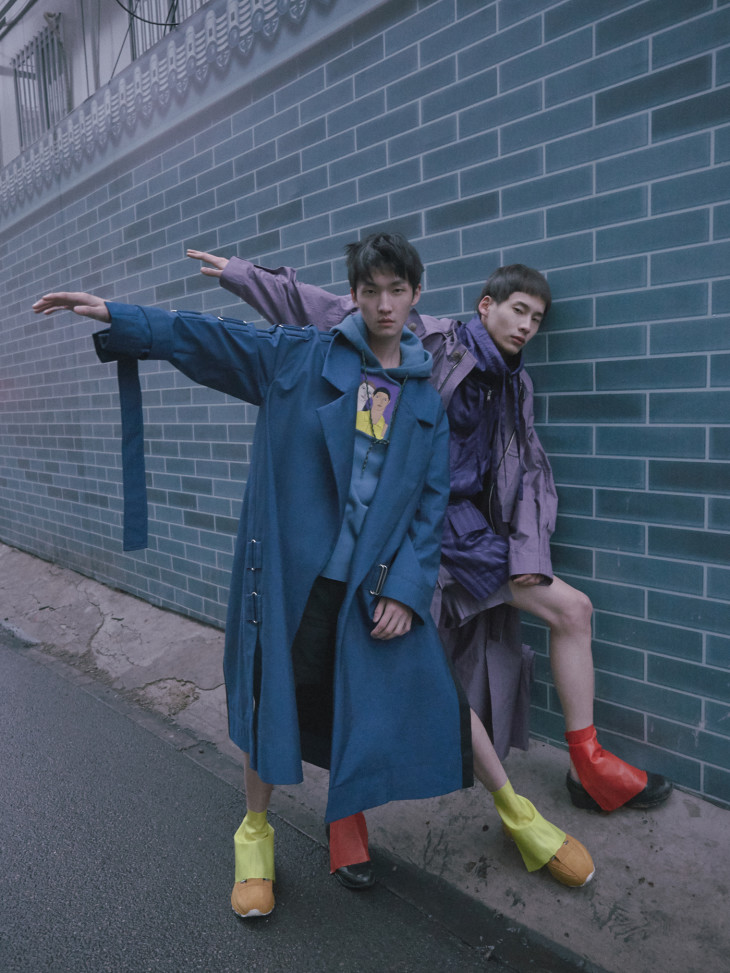 From left: All clothing throughout by PRONOUNCE. Sneakers by KKtP.
Sneakers, stylist’s own.

PRONOUNCE KNOWS THE FASHION RULES WELL ENOUGH TO BREAK THEM

In the past few years, the most interesting fashion brands to emerge have been the ones that have broken down boundaries, developing identities congruous with the attitudes of a younger, design-savvy consumer. Yushan Li and Jun Zhou bring those ideas to life with PRONOUNCE, a Shanghainese-Milanese clothing label born out of a distinctly global perspective. With increased recognition and a slot at London Fashion Week: Men, PRONOUNCE is proving to be one of the most exciting labels made for a new generation.

Founders Zhou and Li are both from China, but it was only during their time as fashion students in London—Li at Central Saint Martins and Zhou at the London College of Fashion—that they crossed paths and found a symbiosis in their fashion outlook. “[We shared] the same æsthetic on menswear design,” Zhou remembers, “and both ambition and the willingness to express ourselves through a whole concept of a brand made us decide to start PRONOUNCE together after working in the industry for a period of time.” For Li, the years preceding the founding were crucial in building the framework for their own label. While Zhou cut his teeth at Ermenegildo Zegna, Li signed on to a gig at Yeezy, taking him to yet another new country with a distinct perspective that would significantly shape his tastes. “This had a three-dimensional effect on me,” Li recalls. “Right after my intense MA course from Saint Martins, I moved to Los Angeles from London. The entire city, lifestyle, communication methods, and the free atmosphere of the Yeezy studio brought me an unprecedented impact.” That experience would translate to the ethos of PRONOUNCE, which is influenced by the relaxed and free-spirited outlook of Yeezy, something on which Li continues to look back fondly: “I still remember the scenes when we got together in the studio after work and watched Akira, which is one of Kanye’s favorite films. I still remember we drove together to Vegas for parties or we went hiking on weekends. The whole freedom vibe and team-working spirit inspired me.”

These disparate, worldly experiences became important in how both designers approach their collections. “It actually affects us a lot,” Zhou says about their global influences. “We were both born in China originally, but we have lived abroad for a long time. Yushan has been in London for eight years while I have been in Milan for almost ten years, and after graduation, I decided to have my house in Milan too. So we do live under an East-West mixed culture situation. The contrast of Eastern and Western cultures integrates our observations into our collections. Our work is mostly abstract, but also can be quite relaxed sometimes.” Their collections often feature loose, draping silhouettes in neutral tones, with experimental touches and unconventional styling. The brand aspires to create genderless clothing—and while the collections as a whole distinctly fall under the category of ‘menswear,’ the type of masculinity on display is more nuanced and unconventional, softer than the kind featured in more traditional Milanese labels. “For our generation, gender is a very open topic,” Zhou begins. “We think that we should celebrate it through our works. We hope that by advocating such an idea, we can also inspire more Chinese young people towards gender acceptance and self-confidence in their own identity.”

Li sees this development as less of a change in menswear itself than about the swinging of a pendulum, now back on the side of openness that has existed in fashion in some form for decades. “For us, the constant change is more about how people see things, and more interestingly, sometimes this may also be like a circle.” In PRONOUNCE, Italian tailoring meets the more ambitious design elements reflective of modern Chinese street style. Mao jackets; wide, boxy trousers; and belted, oversized coats have featured prominently in recent seasons and color palettes are muted, with the exception of standout pieces such as a bright yellow blouson with partially detached shoulders and matching pants. That type of experimentation is at the core of each collection and Li wants PRONOUNCE to master the traditions of fashion without being constrained by them. “This is like a balance between Jun and Yushan,” he explains. “We care about the restraint and rules of traditional cuttings and classics, but meanwhile we have a touch of romanticism and a careless spirit. We respect the history, but we are brave enough to break it.”