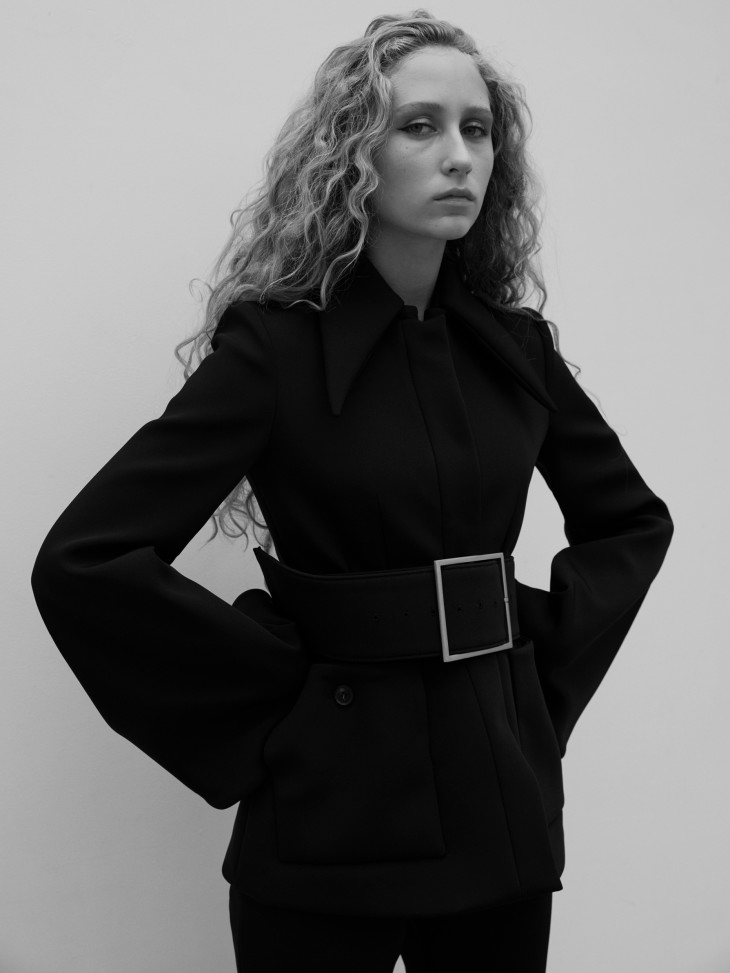 All clothing throughout by Rüh.

IN AN AGE OF OVERSATURATION, RÜH REPRESENTS A PROMISINGLY PARED-DOWN FUTURE FOR FASHION

In an age of excess, when mass consumption and information overload reign supreme, Rüh creates clothing that is quietly meditative. A womenswear label committed to authentic connection, Rüh is characterized by timeless utilitarianism and modern femininity. Founded earlier this year, the brand is led by Sonia Trehan—a tech entrepreneur whose background in religious studies lends a refreshing perspective on the function of fashion. “I think people are interested in stories now more than they’re interested in products,” Trehan says over the phone from London.

This philosophy forms the thought process behind Rüh’s editorial approach to collections, which flow organically rather than following a strict sense of seasonality. “I think this comes from me not having a fashion background, but I never cared about seasons,” Trehan admits. “Instead, we wanted to have chapters which evolve over the year. We release ten to fifteen styles every couple of months and we want this to be woven together, so it feels like a wardrobe.” The result, according to Trehan, is clothing that is refined, but also designed to be challenging. “[The clothing] is wearable and streamlined,” she explains, “but there is something about it that pushes the conversation and drives you to know more about the story.” That narrative aspect comes about through thoughtful content, which is curated by Trehan and her team. Unlike most other fashion websites, though, the Rūh digital space is a closed forum which follows a membership model.

There are no real criteria for becoming a Rüh member, Trehan explains, highlighting that it is not about exclusivity. Rather, the model is designed to bring intention to the brand/customer relationship. “There is often no true engagement [via social media],” Trehan says. “As a brand, we’ve put a lot of effort into creating content that is meaningful, so we wanted there to be at least some sort of pause before that interaction starts with the customer—to acknowledge that this relationship is special, even if it is happening online.” Certainly, it can be easy to follow a new brand unconsciously, only then for its content to get lost in the ether online. Trehan believes that we need to push back against this oversaturation and start investing in a smaller number of brands but choose those that align with our own values. One might suggest that this resolution echoes Trehan’s non-fashion background and her study of religion. Although it does not necessarily inform her in a tangible design sense, the designer agrees that “we do still wear our beliefs on our sleeves today. I mean, what’s happening with Hedi Slimane at Céline right now goes so much deeper than a change in creative director; it’s kind of like a change in belief system,” she says. What is the Rüh belief system, then? First, that clothing should be meaningful and driven by genuine connection. This driving objective is visible in the online member model and in the brand’s direct-to-consumer conception as well. “[Selling direct] creates such a different relationship with our customer,” Trehan explains. Although predominantly sold directly to members, Rüh is currently stocked on Net-a-Porter as well and the designer says she wouldn’t rule out working with other retailers—just so long as those collaborations are forged with intention.

“There’s a big difference between knowing what was sold on Net-a-Porter and actually knowing the person who bought the clothes,” Trehan points out. Likewise, customers that sign up to be part of the Rüh universe are invested in the brand in a way that they might not be if they had simply stumbled across it online. Above all, then, the Rüh uniform is designed to make you think. “We talk a lot about privacy and oversaturation. So, as a brand, we wanted to really embody that,” Trehan says of her thoughtful approach to design. “The shapes and proportions aren’t necessarily for the faint of heart, but there is still something quiet and meditative about them. That dichotomy is something we really wanted to nail.”