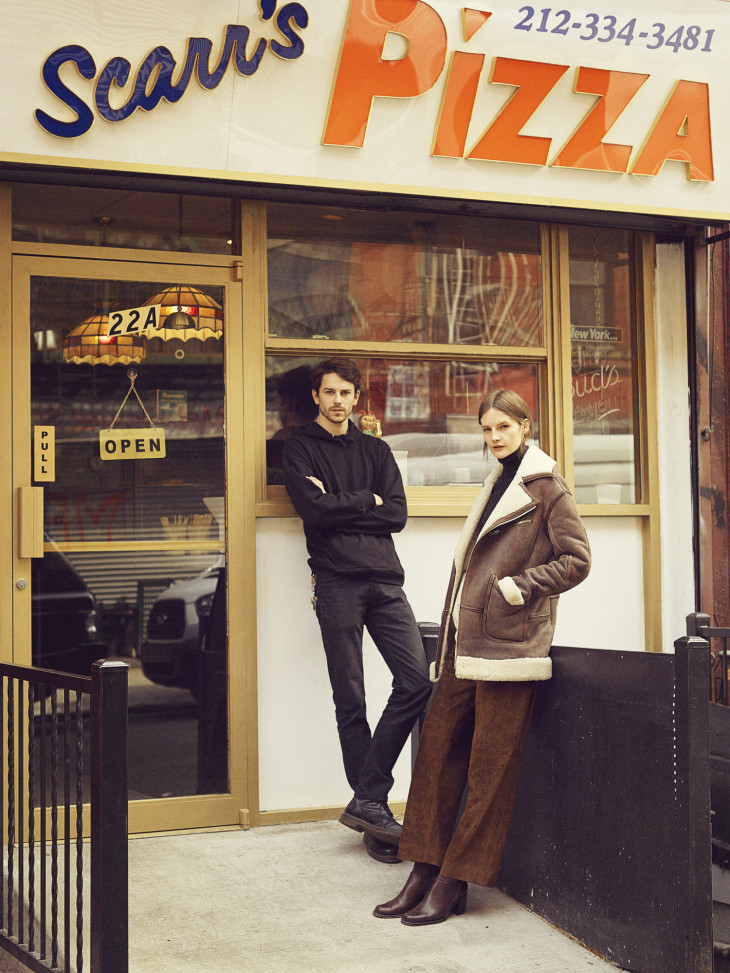 As working models, Sara Blomqvist and Jeremy Young might not be the first couple you would expect to find eagerly surrounding themselves with carbohydrates and cheese, but that’s exactly what they’ve done at Scarr’s Pizza, the new pizzeria which opened last month on Manhattan’s Lower East Side and of which they are part owners. “Sara and I always wanted to have a deli-type marketplace and then this came along, and rather than starting fresh not knowing anything, this was the perfect platform to go into the industry,” Young explains. “We wouldn’t have been able to do this on our own.”

Blomqvist and Young became involved with the restaurant through their friend Scarr Pimentel, a veteran of legendary pizza spots like Lombardi’s and Joe’s who was looking to set out on his own. “Scarr was like the first person I met in New York,” Young recalls, with Blomqvist adding that the couple first met at L’Asso while Pimentel was working there. “We’d come to the point where we wanted to do something more, and it’s such a great opportunity,” says Blomqvist. “It’s all good friends and we know that we have the same aspirations.”

The small storefront on Orchard Street offers a takeaway counter up front with a natural-soda fountain and coconut water, while the tables and the bar in the back are meant to evoke the comfortably shabby Seventies pizza parlors Pimentel grew up in, down to the mismatched stained-glass light fixtures. “Scarr wanted to recreate his childhood pizzeria, so this is what we envisioned,” Young says, noting that most of the furniture was salvaged from a bowling alley in New Jersey that was being demolished. Similarly, the Lower East Side location, blocks from both Pimentel’s apartment and Blomqvist and Young’s new home, is meant to evoke a less corporatized time. “It’s just one of those places in New York where it still feels like a neighborhood,” Blomqvist says. “With all the little shops and everything, everyone knows each other.”

The slices Pimentel has crafted for Scarr’s are surprisingly healthy, with both the flour and the tomato sauce milled on site to maintain freshness. His knowledge of dough, which Young admits took a bit of perfecting given the variability of fresh flour, results in a perfect combination of chew and crunch, with appropriately crisp blisters along the crust from the oven. Toppings include the usual pepperoni and anchovies, but also more adventurous options like pancetta, jalapeños, and even vegan cheese, all sourced responsibly and locally and with an eye to sustainability.

It look months to perfect the recipe and the ingredients, but all involved are quick to say that the long process of trial and error was worth the effort, in more ways than one. “It was tough,” Blomqvist laughs, as Young offers, “I think I’ve gained like four kilos.”