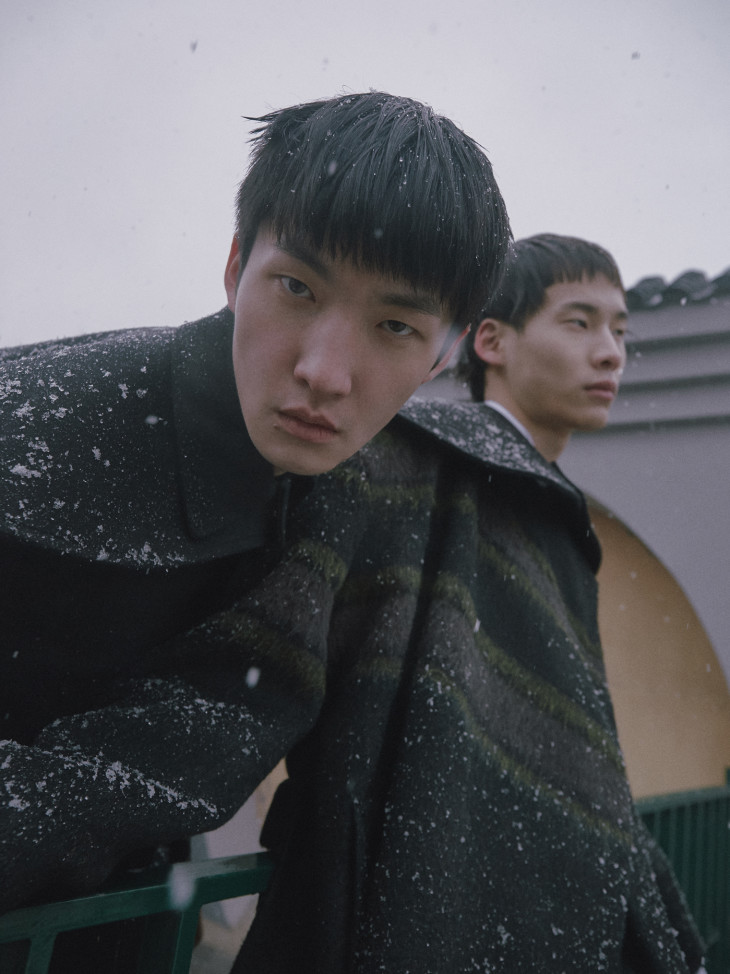 All clothing throughout by Sean Suen.

“I think there is so much creativity developing in China now,” the Beijing-based designer Sean Suen begins. “It’s coming from a unique point of view, it’s being allowed and encouraged to develop in a way domestically that previously wasn’t possible.” Much like his homeland, the designer and his namesake label are having a moment, at a time when the fashion world has redirected its attention towards Asia and is gauging the creativity coming out of the East with bright-eyed optimism. “These factors are naturally having an impact on the international perception of Chinese fashion design and brands,” he continues, “and there are many strong points of view coming out of the industry in China now.” With his label continuing to gain further recognition after years of presenting his runway shows in London and now Paris, Suen is part of that transformation and his deep, textural designs feel right in place alongside his contemporaries around the world. All boots throughout by Aigle.

Suen’s path to fashion wasn’t planned but was driven by an innate curiosity: “I wasn’t always interested in fashion per se, but I was always interested in people’s clothes and the impression the clothes made on me from a very young age.” He studied and worked in graphic design after college, taking part in diverse projects ranging from educational institutions to architectural displays, but there was a dissonance between him and his work that he needed to reconcile. “I transitioned into fashion because I wanted to create things that were more tangible,” he explains, “something physical or in three dimensions, something you could experience more than just visually.”

That search for the physical manifests in Suen’s designs through the use of an array of materials to create refinement through unlikely texture pairings. “I often begin collections with just searching through fabrics for the right texture to bring the concept into something tangible, as I mentioned before,” he explains. “It’s important to me to try and convey depth throughout the design.” The fabrics he chooses lend themselves to the relaxed attitude that pervades each collection, a “languid masculinity,” as the brand describes it. “I am trying to approach things at my own pace and through my own lens,” he reasons, “and I feel if I exert myself too much during the creative process it can start to feel less fluid.” This individualist spirit helps his collections keep in line with the general boom in interest currently driving men’s fashion, which Suen attributes less to the undeniable growth of menswear and more to a public increasingly knowledgeable about its importance in culture. “I think of course there is a much larger sensibility for fashion amongst the general populace and that it has to be considered both ways,” he says, “as I feel design influences what people are wearing and of course what people are wearing affects design.” For his Fall 2018 collection, entitled ‘The Last Emperor,’ Suen looked to Bernardo Bertolucci’s film of the same name as an insight to the very city he lives in. The looks follow the trajectory of the film’s protagonist, Emperor Pu Yi, beginning with rich colors and regal shapes—the caramel and burnt sienna suits, oversized belted coats, and fur collars—that would appeal to the post-streetwear crowd. The collection then becomes austere, the clothes now black and the shapes refined but streamlined. Through the thirty looks, there is both decadence and simplicity, the merger of cultures, and the precision of a designer at his most elaborate and his most minimal. Suen’s creations demonstrate that he places the value of diverse perspectives at the forefront in an increasingly international age with the cultural depth of China, including the designer himself, ascendant. “Sometimes especially in China—and I guess the rest of the world where we live in these modern metropolises—we forget we also have this rich history surrounding us,” he says. “I suppose you could say the film acted as a reminder that I was living amongst the necessary inspiration.”