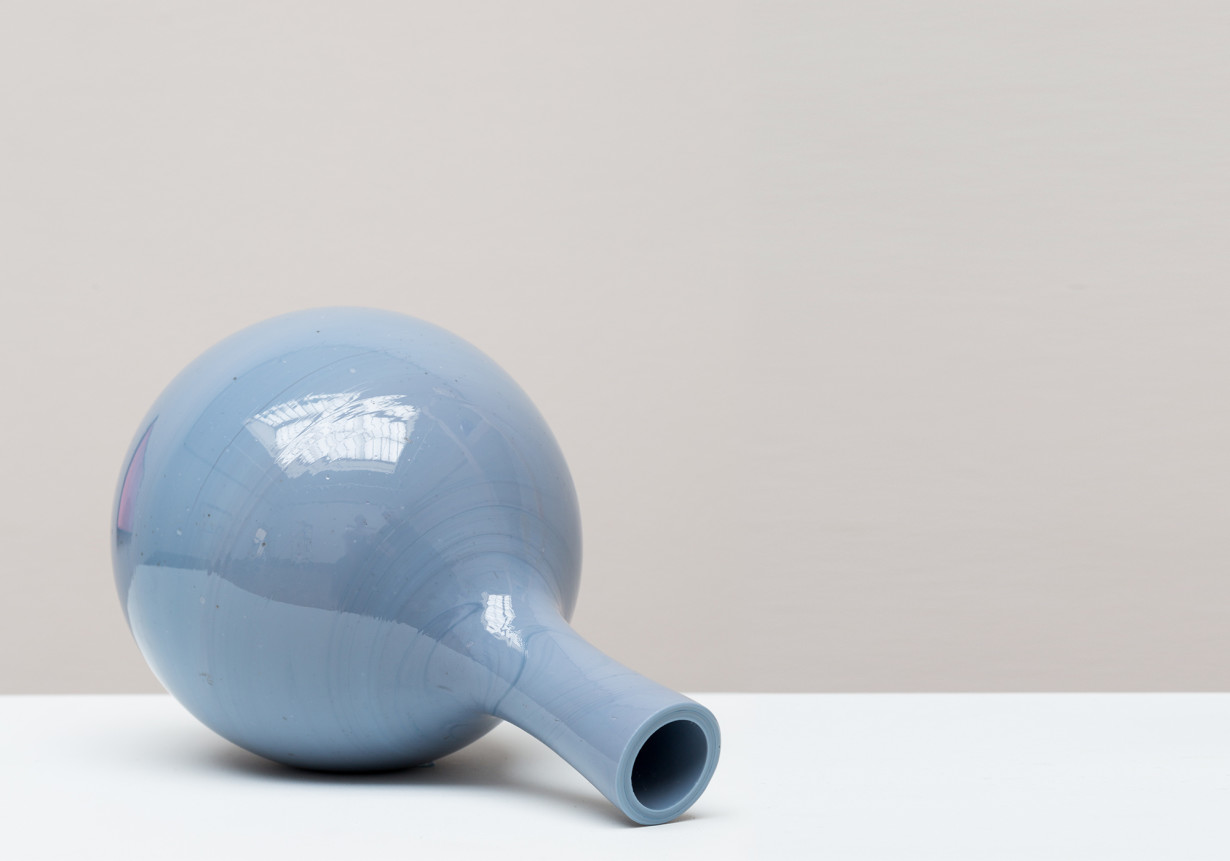 All images: Simon Klenell, from “Center for Amorphous Studies,” 2014. Photography by Erik Wåhlström. Courtesy of the artist.

As a child, glass proved to be more foe than friend. The amorphous solid was perpetually out of my reach: locked up in cabinets, shaped into figurines of prim, quiescent ladies, stored in kitchen cupboards that couldn’t be accessed without a leg-up. Glass was sacred in our household—reflecting light and refracting it—forever forbidden. It was violent. When it broke, splintering into hundreds of tiny, barely-visible fragments, it was quickly swept away by frantic adults brandishing dustpans.

This was not the case for the 29-year-old glass artist Simon Klenell, who grew up in Sunne, a small Swedish town about five hours drive west from Stockholm. The population numbers approximately five thousand, and the dominant industries are printing and packaging—not quite a hub for glassmakers. The town’s two hotels are both named after Selma Lagerlöf, a novelist and local who was the first female to win the Nobel Prize in Literature. In hyper-saturated guidebook photographs, Sunne has all the prettiness of a gas-station postcard: scintillating lakes, quaint houses, lush stretches of green.

Klenell works between here—his hometown— and Sweden’s capital. He usually visits for extended periods: summer holidays, Easter, Christmas. Sunne is where Klenell first learned to blow glass at fifteen, under the watchful gaze of his parents (his father is a glassblower by trade; his mother, an installation artist working with the material). “It’s beautiful here, and it’s calm and it’s easy to concentrate,” Klenell says, over Skype. “When I was a kid, they hosted workshops here at the studio, with people coming from all over Sweden and other places in Europe and the States. I thought it was an interesting way to meet people.”

Was he ever afraid of touching glass—even when he was very small? Never. “This is how I grew up,” he says, switching on the video function and giving a brief, pixelated tour. The walls of his parents’ airy home-studio are pale pink and there are white sheets over surfaces. Glass is everywhere. “It was never restricted, not in any way. Once you start to work with it as a professional, you really lose that respect for it.” When we talk, Klenell is preparing for an exhibition now on view at Clara Scremini Gallery in Paris. It’s his first solo show in almost two years, and his first outside of Sweden. In it, he will revisit previous series that deal with cut crystal, such as 2010’s “Dark Matter (Prologue)” and 2011’s “Frigger Tactics.” He estimates he will produce— with the help of his father and perhaps one other assistant—around twenty works in black and clear cut glass. At the request of the gallery, they will be much bigger than usual. “That’s pretty much all I can tell you!” he laughs. “I don’t do a lot of sketch work. I don’t plan too much. Instead, I restart the working process each time. I find new shortcuts, new things I want to try.”

Like many artists who work within a ‘craft’ practice, functionality—and, more importantly, expected or perceived functionality—offers an entry point to Klenell’s work. In older sculptures, the lips of a drinking vessel are met with the end of a thick glass balloon, removing the physical entry point. Tumblers and vases are smashed together, forming long, alienating structures. In depriving craft objects of their assumed utility, Klenell renegotiates the culturally coded expressions embedded in the material. It’s a simple premise (one he doesn’t claim to be original), but it’s effective.

“Believe it or not, people are still interested in that dimension of expensive objects,” he says. “‘How can I use it?’ The whole expression comes from a world of cups and vases and liquor bottles. And expected functionality is just as important. If you have a crystal bowl you bought during the 1950s from a famous manufacturer, you probably don’t have salad in it. But the expected functionality gives it [worth].

“What I found interesting, once I started to work around cut glass and crystal, was that one material could have so many dimensions. For me, as a maker, it’s gooey, messy, sweaty, and uncontrollable. You’re working with a blob of hot, runny material at the end of a stick. There’s another side: precious and expensive. Crystal was something you gave as an anniversary gift or to someone who turned fifty. It’s almost eternal in a way, like gemstones. I wanted to combine the two ideas around the same material and see how those worlds could meet.”

Klenell is often referred to as an artist. The inference, however, may be problematic for some, due to his material approach and the nature of his training (before studying art at university, Klenell moved to Småland—home of well-known Swedish factories like Orrefors and Kosta Boda—learning to make glass in a highly traditional manner for two years). “That distinction [between artist and craftsperson] isn’t so important to me,” he says. “It’s nothing that I dwell on. What I think is interesting about the crafts field is that functional and decorative aspects give the work autonomy. They can exist outside of a white-cube context—the other kind of art art needs a different support structure.”