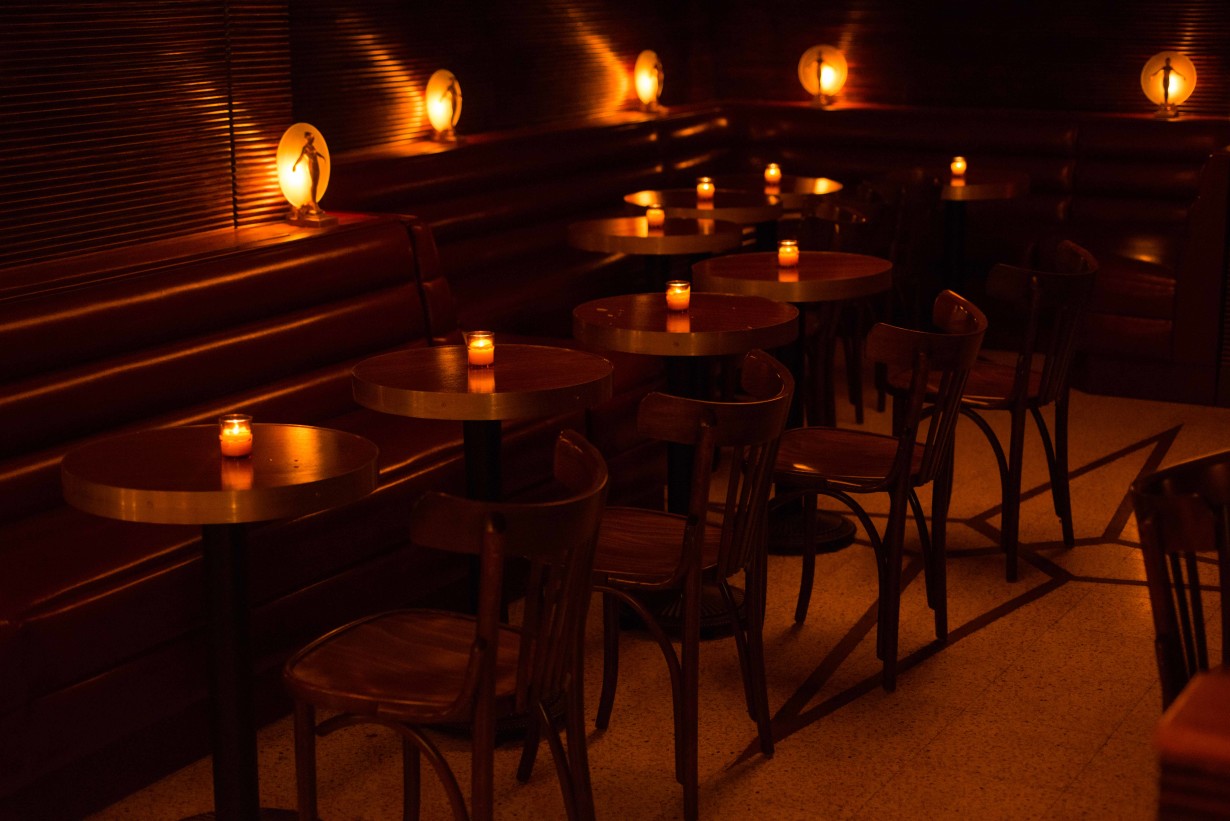 In the past few years as a culture writer in New York, the most frequently asked question I get is ‘Where should I go for drinks?’ Between post-grads looking to be ‘in the know’ to artists who need that perfect spot to woo their new muse, fine drinking in New York can seem a hidden secret, a mystery understood only by a select few. But gone are the days of speakeasies—not just the hidden watering holes that gave Twenties New York an extra dose of spirit, but the ‘hidden’ bars of the late aughts that had such a surge in popularity (thank you Yelp!) that a new one popped up every other month, and the secret was out. So what do I tell them? Where’s the ‘it’ spot, the place that’s lassoed the with-it herd, the boîte where drinks are not merely poured, but crafted? Lately that answer has become much, much easier.

Last year, restaurateur Jon Neidich debuted the Happiest Hour, a proper cocktail bar situated right in the heart of the West Village. Since opening, the bar has been buzzing every night with a young crowd eager to explore the world of cocktails without the weight of expectation or the reservation policies of older and more famous bars around town. Now, Neidich is doubling down and offering the basement as a retro-inspired cocktail bar exuding elegance at every corner called Slowly Shirley. “We wanted to create an independent concept that has a more sophisticated, after-dark ambiance; less raucous, more sultry than The Happiest Hour,” says Neidich, “But Slowly Shirley should appeal to a variety of types. People looking to enjoy world-class cocktails or those just looking to enjoy a drink or a date in a sexy, intimate environment will both feel welcome and at home.” The latter certainly rings true, with dim lighting, burgundy leather seats, and portraits of actors from the Forties perched up against the walls as smooth soul and jazz sounds selected by Neidich and his bartenders permeate through the small room, creating one of the most ideal date-night spots in a city full of them. To add to the retro flair, the bartenders don coordinating burgundy evening coats with bow ties that evoke the allure of forgotten days: “I was really intrigued by the idea of a Hollywood hotel-lobby bar. Historically, the best bartenders in town could be found at hotels. Most importantly there was a sophistication and elegance about the era that I wanted to bring downtown.”

While ambiance alone often determines where people go, the cocktail menu created by Happiest Hour partner and famed mixologist Jim Kearns stacks up against any in the city. Half the menu features riffs on classics, fitting for the entire æsthetic of the place. “Jim has an uncanny talent to use contemporary methods to create cocktails that are very much rooted in the classics,” Neidich assures us. “The classics section itself is meant to put the overall program into historical context by showing how different styles of drinks have developed over the years.” Creations by the tenured bartenders, all of whom have at least one of their own cocktails on the menu, are showcased with their names listed alongside their offerings. Fruit flavors get to shine, with drinks like Garret Richard’s Cleopatra (cachaça and vodka with banana cordial and lime) or Kearns’ own If Wishes Were Horses (tequila and gin with blood orange, grapefruit, lime, and something devilishly alluring called Hellfire shrub). The drinks are also potent, like one of Neidich’s favorites, The Quilty: Islay scotch, mezcal, and bourbon are sweetened with Galliano Ristretto and Amontillado sherry. It’s certainly not for the faint of heart.

The opening if Slowly Shirley happened to coincide with the opening of Neidich’s other subterranean hangout Tico’s Tequila Bar below Tijuana Picnic in the Lower East Side. There, guests trade up vintage glamour for tequila-infused parties well suited for its neighborhood. “In New York, timing is often unintentional. It just worked out like that. With regards to the contrasting vibes, that is dictated often by the energy of the two upstairs spaces respectively. It’s always good to give people choices.” Of course, both choices point to the underground. So how do two brand-new basements that opened right as the summer season kicked off compete with the bevy of outdoor or rooftop bars? The success of Neidich’s first claim to fame, Acme, is more telling than anything else. “The cool escape of a basement is always appealing, but New Yorkers are the true educated consumers. They will go wherever the quality product is regardless of weather.” With Slowly Shirley, Neidich need only remind his loyal crowd that there’s a new spot in town, and they’ll be there with a drink in hand. And just like that, Neidich concludes with the Postal Service’s eloquent motto: “Neither snow nor rain nor heat nor gloom of night stays these couriers from the swift completion of their appointed rounds…” It’s certainly never stopped us before.