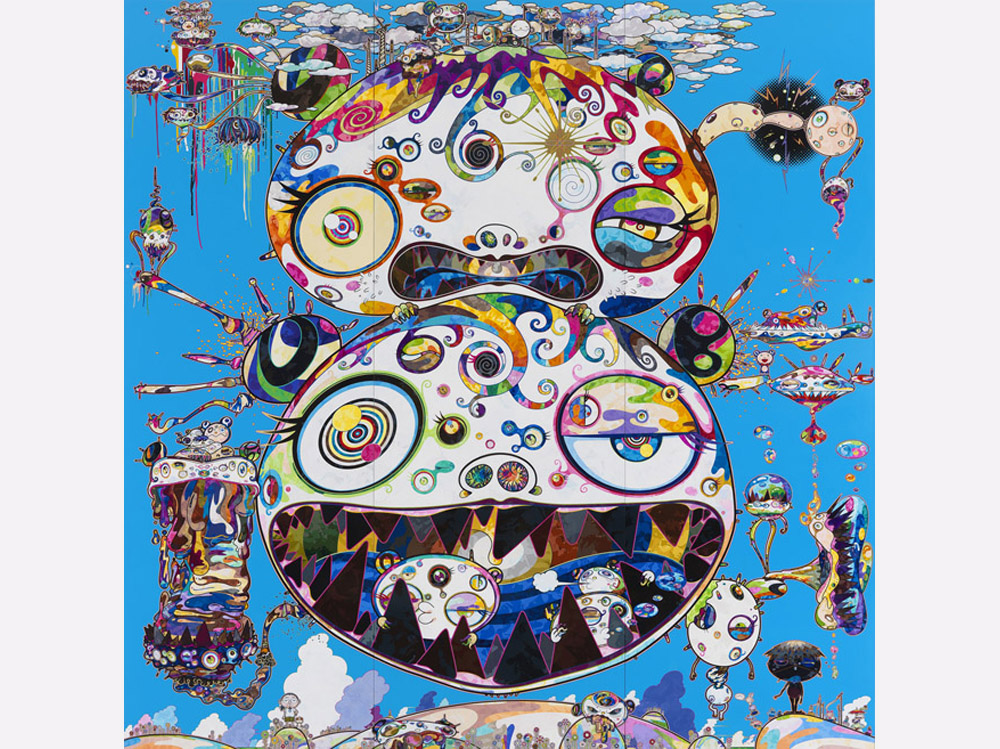 Propagator of the “Superflat” movement, Takashi Murakami treads past his infamous reputation for creating superficial work in his new show at Gagosian in New York.

“In the Land of the Dead, Stepping on the Tail of a Rainbow” bypasses the trite debate of whether or not commercialism depreciates the meaning and value of art, allowing for a reinterpretation of Murakami’s signature style. Praised for seamlessly merging the highs and lows of contemporary pop art with his anime-influenced paintings, all while being wildly criticized and categorized as a sell-out, or just the Japanese wannabe version of Andy Warhol (his Toyko Kaikai Kiki factory included), Murakami here repurposes his superflat form in new work that grapples with the relationship between his native society and catastrophic disaster. Moved by the harsh reality of the Tōhoku earthquake and tsunami of 2011—a tragedy that sparked a wide range of responses, including the founding of the charity Fashion Girls for Humanity—Murakami addresses Japan’s needs to cope. “Chaos is natural, but we have to make sense of it somehow,” he says in his official statement for the show.

Citing his past disregard for religion, Murakami now acknowledges a newfound understanding in its utility as a means for recovery, equating it to fairy tales or stories used to make sense of turmoil. The dark disarray, expressed in Murakami’s famously bright and glossy anime-inspired style, creates a balanced duality of the ancient and modern. He reinvents his usual superflat band of characters, creating a narration of abstract, science-fiction, Buddhist, and Shinto imagery—his own version of Japanese folk painting. Most recognizably, his alter ego Mr. Dob is embodied in a the bright, jelly bean-colored, psychedelic space of would-be nuclear reaction in Tan Tan Bo – In Communication, probably the cutest vomiting creature seen in art to date. The 28-piece show of painting and sculpture also features visages of arhats (enlightened beings); his usual characters Mr. Pointy, Kaikai, Kiki, his signature flowers; lots of skulls; and even several depictions of the artist himself.

The centerpiece of the exhibit is the 56-ton Bakuramon, a replicated sanmon (sacred gate) from the 1950 film Rashômon. Made of weathered wood and stone, it guides patrons to the exhibit’s 82-foot-long namesake piece. This horizontally narrated panorama depicts a scene of elderly arhats, a listless toad king, various natural and mythical animals, and small human beings transitioning into a catastrophe of colorful waves overtaking sail boats before subsiding into a dark cluster of jovial human skulls with colorful skull accents—Murakami’s version of memento mori, all while maintaining his own æsthetic and the traditional flatness of Japanese painting. (Murakami holds a PhD in nihonga—Japanese-style painting—from Tokyo University of the Arts.) It is Murakami’s version of traditional Japanese scroll paintings, an ode to artists like Kano Kazunobu, who also painted arhats during a historical time of distress, the aftermath of the Great Asei Edo Earthquake of 1855.

Protecting Bakuramon and the three sci-fi black hole paintings that are reinterpretations of Murakami’s famous jellyfish eyes are Embodiment of A and Embodiment of Um’s mammoth sculptural forms. The brute creatures, named for the first and last letters of the Sanskrit alphabet, stand atop platforms depicting the four elements of earth, water, fire, and air, which, according to Buddhism, are key to understanding and overcoming suffering. Even when presented in the context of darker subject matter with a propensity for overt interpretation, Murakami’s work is still its own breed of neo-pop art made to appeal to the same mass Western audience that obsessed over his Louis Vuitton collaboration and Kanye West album art, and probably will spend the majority of its time at Gagosian Instagramming rather than trying to understand the underlying meaning of the artist’s works. Conveniently, in modern-day Japanese society, Western acceptance is a goal that doesn’t seem to be shifting. The question then is, does it matter? “Maybe if I were younger I would try to change things, but now I’m resigned to just record and report,” Murakami recently told Mashable, about fighting for political change. The onus, then, is on Murakami’s (often-younger) patrons to correctly interpret his work in the frame of its social and cultural commentary and, if so moved, take action. Otherwise, just enjoy the candy-coated sugar rush.

“In the Land of the Dead, Stepping on the Tail of a Rainbow” runs through January 17, 2015, at Gagosian Gallery, 555 West 24th Street, New York. All images courtesy of the artist and Gagosian Gallery, New York. © 2014 Takashi Murakami/Kaikai Kiki Co., Ltd. All rights reserved. 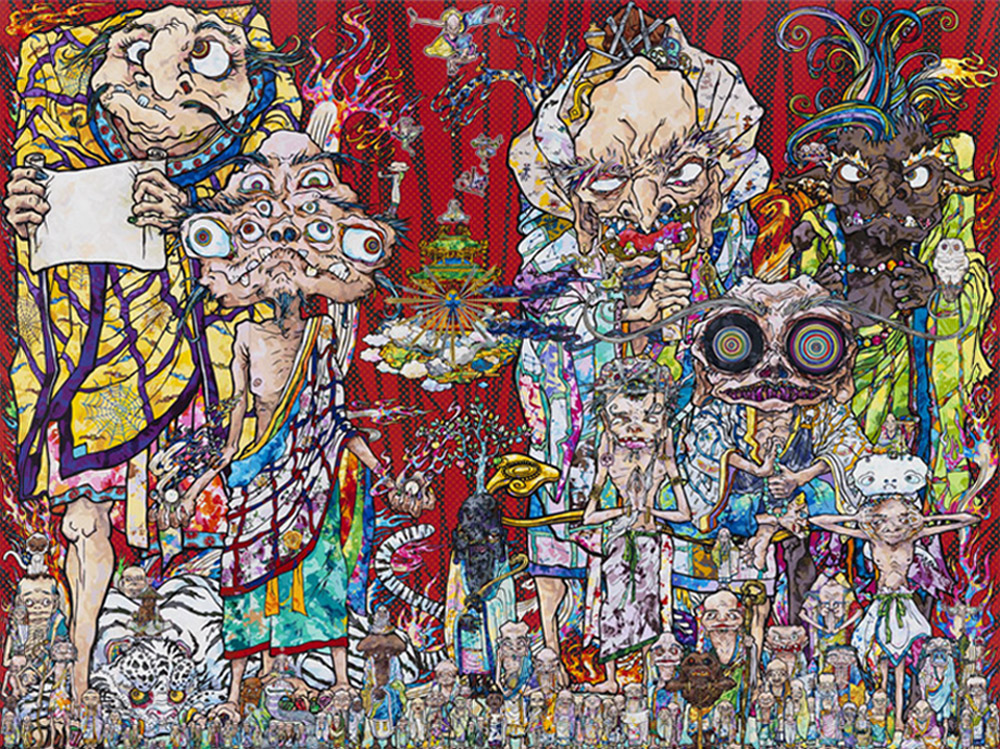