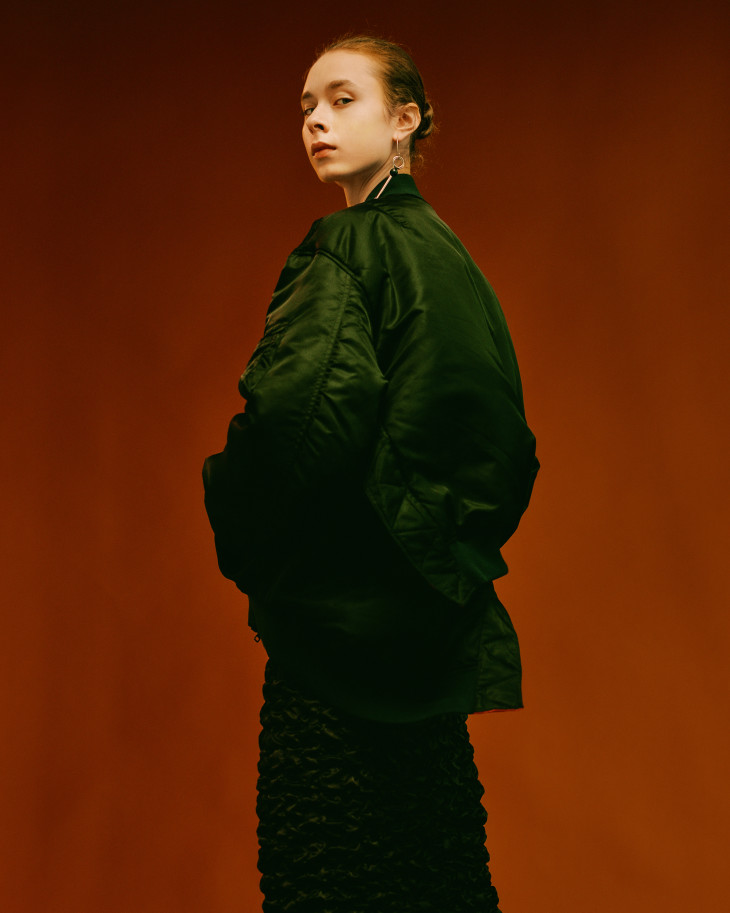 Jacket by Y/Project. Vintage dress, stylist’s own. Earring by Sorelle.

Under the pioneering direction of designer Glenn Martens, Y/Project has emerged as one of this year’s leading brands to watch. It’s not just because of the intrinsic wearability or his strong eye for detail, but also due to the inherent sense of attitude. First launched in 2010 by the Moroccan designer Yohan Serfaty, the Paris-based label was originally designed for men. But with Martens now at the helm, Y/Project has expanded to also include a dedicated womenswear line. Hailing from Belgium, Martens graduated first in his class at illustrious fashion institute the Royal Academy of Fine Arts, Antwerp, and has worked for the likes of Jean-Paul Gaultier and menswear label G2 since. He was also recruited as a first assistant to Serfaty some years ago and worked for that designer’s first eponymous label, but it was only following Serfaty’s passing that Martens was approached to join the team at Y/Project.

Martens was tapped to take over as creative director of Y/Project in late 2013 and, since then, he has been working to redefine the label, with due respect to its storied history. “When you take over a brand, you obviously have to build further on another [person’s] work,” Martens explains. “To me, this was a totally new and challenging approach to design. I dissected Y/Project’s rich archive, in search for connection points, and appropriated anything I felt could be of use.” Unsurprisingly, it was attitude that he found to be the first connection point. Revisiting the straightforward, tough æsthetic of Serfaty’s earlier collections, Martens also strove to tap into Y/Project’s androgynous appeal. Though historically a menswear label, Y/Project was also known for its success among women, so the decision to introduce a dedicated womenswear line felt at once bold but, also, completely natural. “Today we propose very different collections from the historic brand,” the designer notes, “but there’s always been a similar sensibility of sleek silhouettes and elegance. Looking back, I think the transition was very fluid.”

But that transformation was not always a task with which Martens felt entirely comfortable. In fact, when Y/Project CEO Gilles Elalouf first offered him the role of creative director, the designer says he was flattered, but insisted that he wasn’t the right man for the job. “First of all, with respect for what Yohan has built, his æsthetic was opposite to mine. Secondly, I wasn’t sure how to impose myself on a team and a client base in full mourning.”

After some long discussions with Elalouf, the two discovered similarities in their visions for the brand’s future. “So I took the challenge,” Martens recalls. “Today, four seasons later, I am proud of what we’ve achieved. The first two seasons were a proper transitioning, but for the past two, we’ve imposed our identity and freed the path to the future.” This is a future that certainly looks bright, too—with Y/Project emerging as the latest in a new guard of buzzed-about brands to come out of Paris over recent years. Undeniably, there is a character about the label’s æsthetic that feels both singular and completely effortless. It’s a mood that can only be summed up with reference to the ever-elusive Parisian style, in tandem with the Belgian spirit of rebellion.

“Fall 2015 was the first collection to incarnate what the Y/Project of today really stands for,” Martens explains. “The fundamentals thrive on versatility in concept, wearability, and attitude.” But with Spring 2016, that incarnation feels even more resolute. “I merged our bases with Gothic architectural elements and subtle references to my hometown—everyday basics such as bombers, trenchcoats, and hoodies have been dismantled and then reconstructed, mixing medieval structural forms, boosted with a modern dynamic energy,” Martens says of his latest collection.

The result is a series of graphic cuts and geometric shapes, which serve to elongate the silhouette. Or, as the designer puts it, to “revisit and transcend the pieces of the collection as if they were a Gothic cathedral.” It is womenswear, but with a modern strength about it that lends a certain distinction. “Personally, I love contrasts and I seem to focus on duality in everything I do,” the designer explains. “From one side, the inspiration comes straight from the street, but on the other side, I am also an architecture graduate, so I’m obsessed with cuts and construction. I love experimenting with alternative ways of building up the garment.” With all of that in mind, Martens describes the Y/Project æsthetic as “a joyful mix of the bursting vibe of the street and the theoretical principles of its construction.” There’s a certain poetry in this perception, and it is perhaps this abstract approach that makes Y/Project stand out. Martens’ mindset is one not exclusive to the realm of fashion and that, it seems, is also what works in his favor.

The hometown from which Martens continues to draw inspiration is Bruges, a cultural touchstone that the designer describes as having had a major effect on his artistic sensibility. “There’s something very intriguing in the clinch between the austere and elongated silhouette of this medieval town and the trashy side effects of mass tourism,” he elaborates. “It’s fascinating to see the shadows of Gothic cathedrals reflected in multicolored neon lights, for example.”

Having produced iconic fashion talents like Ann Demeulemeester and Martin Margiela, Belgium itself is renowned for spawning innovation and creativity. “I guess most Belgians would agree that we grew up in a country that just isn’t pretty,” Martens says bluntly. “We’re constantly searching for hidden charms and that’s exactly the beauty of it. While aiming for the essence of things, we’re flirting with the unexpected or the absurd.” This is a sensibility that one can see reflected in the inner strength of Martens’ clothing for Y/Project. It is the hidden attitude of these designs that strike you first and foremost.

Martens is nothing if not a modern designer and, for him, creating clothing with an identity is crucial, although he does admit that designing for women requires a completely different approach for him. “For guys, the process is focused on emotions,” he explains. “Even for the most basic t-shirt, you need constant reflection of the man wearing it. But women dare more, so the design process is therefore much more experimental and straightforward.” That process aside, freedom is what drives Martens most. It is something that he believes is integral to modern life. “The whole strength of this era, the culture we grew up in, is freedom,” he says. “We’ve fought for personal identity, and I’d love to reach this with my clothes, regardless of the gender. I see all my friends living several different lives in one single day. Our clothes have to reflect this freedom and give them the chance to accentuate whatever they want, whenever they want.” In other words, Y/Project’s clothing is constructed to perfection, but most importantly, it has a sense of identity—one that complements, rather than covers, the man or woman underneath.