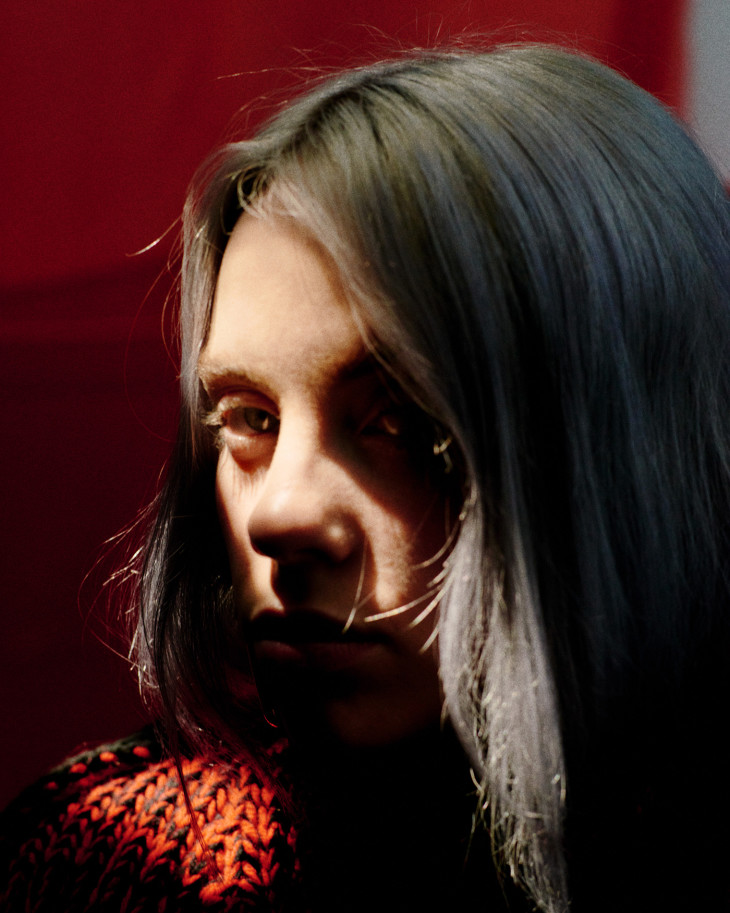 BILLIE EILISH IS THE VOICE OF GENERATION Z

In her earlier years, Billie Eilish had never really considered being a singer. Despite having been in the Los Angeles Children’s Chorus since the age of eight, she was training to be a dancer. When she was badly injured, her dance teacher asked her to write a song to which to choreograph a dance. Eilish loved the idea and enlisted her brother for help; after rewriting one of his band’s songs and recording it with her vocals, they put it on SoundCloud as a free download. Immediately, it became an overnight success.

That song, “Ocean Eyes,” was released when Eilish was just fourteen and immediately gained traction online, especially after a little nudge by Jaden Smith on his Beats 1 radio show. “He played ‘Ocean Eyes’ like right after it came out and it was the biggest deal in the world,” she recalls. “We all sat around my mom’s phone—it was crazy.” On the song, Eilish’s aerated vocals float like cumulonimbus clouds above the thick, unwavering baseline below and the lyrics are vaguely marshmallow-like: sweet, soft, and lovable. On the basis of “Ocean Eyes” alone, one could be forgiven for assuming a complacently sweet idea of her æsthetic. But this was back in 2016. What has since appeared on her six-million-strong Instagram page—in time it took to write this piece, her account gained seven hundred thousand more followers—is not that. In a recent post, she stares directly at the camera with her intense blue eyes, a deadly straight head of blue/purple/gray hair wrapped in a green bandana with “BILLIE” repeated across the front in block capitals. She favors edgy selfies, disheveled photos next to broken furniture around Los Angeles, and self-deprecating, melancholy captions which remain just slightly outside the realm of understanding. Eilish represents the modern street style influencer—and she also happens to be one of the most talented musicians of the contemporary young crop.

Two years on from “Ocean Eyes” and without the usual shame that accompanies revisiting early work, she accepts its rightful place in the making of her career. “I’m really grateful for that,” she says. “I hear the way my life was when we made that song and the way it’s progressed. I still think that song is so beautiful—but if I made that song now, I wouldn’t put it out.” It is hardly a shocking claim for a sixteen-year-old to make that she’s no longer the same person she was, but, unlike most teenagers, Eilish has the concrete evidence of the harsher, more impactful songs coming off her latest EP, Don’t Smile at Me, to back it up. These newer tracks are confrontational and subversive, with lyrics like “the way I wear my noose, like a necklace” and “biting my nails, I’m too young to go to jail, it’s kinda funny” on the contagiously catchy song “Bellyache.” Or take the blunt spoken line “Alright dude, go trip over a knife” in “My Boy.” The depth, humor, and brutal introspection of the record are threaded through the music via exceptional melodies and gorgeous musical layering. From the beauty of “Idontwannabeyouanymore” to the weight, grit, and rhythm of “Copycat,” the EP etches an indelible mark on the mind.

The jewel of the collection is “Lovely,” a beautiful and commercially successful collaboration with the similarly talented wunderkind Khalid. Their connection can be seen as that beautiful instance of truly reciprocal respect for each other’s art. Immediately after his hit song “Location” came out, she looked everywhere for him, to no avail. In a last-ditch attempt, she turned to Twitter, only to see he was already following her. “He DM’d me and he was like, ‘Hey, I’m such a fan of yours, I’m moving to LA, we should hang out,’” she recalls. “I was like, ‘Oooh, OK.’ What I love about me and Khalid is that our bond is real because we met each other when neither of us had any sort of hype whatsoever. It wasn’t really like, ‘Let’s get a day in the studio and blah blah blah.’ He just came over, we wrote a song, and recorded it.”

Eilish may have attained her fame through her songs, but music isn’t where her creative endeavors end. Her Beats 1 show Groupies Have Feelings Too is cohosted by her brother Finneas and is her “little place to introduce people to new stuff that isn’t just being repeated over and over on the radio.” She just started her own clothing brand—of which she’s got full creative control—and which, in typically Eilishian, irony-blurring fashion, she promotes while simultaneously squirming at the idea that people would try to look like her. Her dancing hasn’t subsided either. In Eilish’s recent music video for “Hostage,” she performs emotive and haunting choreography inside an evil, shape-shifting white room with a victimized lover, “doing all the things that a dancer could dream of.” Perhaps film director or photographer is next? One day, she hopes.

But if you don’t like her “slash” generation approach to life, she is doggedly indifferent. “I don’t want to be just one thing at all, ever, and I don’t care how you find me,” she insists. “If you fuck with at least one small part of me, then I respect that. Or even if you don’t fuck with me, I respect that too, because people have their own fucking opinions and I don’t care.” It’s a defiant and almost aggressively accepting approach—like a peace sign doubling as a big ‘fuck you.’ All of these signs point towards Eilish emerging as an artist in transition. Her latest single, “You Should See Me in a Crown,” is a dark and wriggling track in which she emerges wearing a crown—the black magic queen of pop. The song is evidence her production is diversifying while her tonality and voice are reaching powerful new heights, perhaps the result of an ever-strengthening creative connection with her brother Finneas, who has worked as her producer since she began her journey. “We always just come out with exactly what we want, or at least now we do,” she explains. “I think my past work in the past year has been sort of figuring stuff out and not necessarily what I would want. But right now, we’re at the place where we’re making exactly what we want to be making.”

With her considerable youth, hype equivalent to a small planet’s gravitational force, and a social media following roughly the size of a large city, it’s no great surprise that in considering her own situation, Eilish tends to existentially overheat. “I feel like my life isn’t even my life, dude,” she says. “Or maybe I feel like my life before any of this wasn’t my life, or my life now isn’t my life. I have no idea.” She may not want to consider the future, for it may be too grand, too vast, and too gleaming to fathom, but there is one thing for certain: Her music is only getting richer. Billie Eilish represents the idea of just doing what you want to do, without caring too much about what people think. Her badass, confident attitude bleeds into all of her other creative offshoots and only makes them stronger. The fuck-it generation has found its leader.