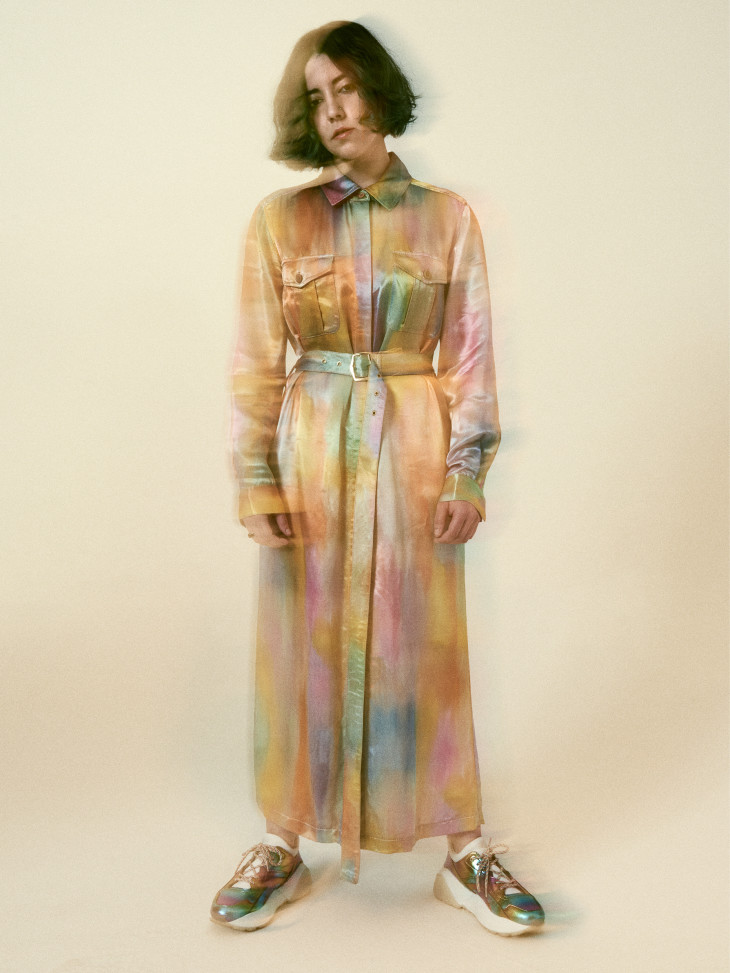 The sound of the ukulele may conjure images of rainbows framing tropical beaches in Hawaii, but in the hands of the 26-year-old musician Jackie Mendoza, the instrument is the basis of some dark, ethereal compositions. On her debut EP, LuvHz, it can be hard at first to hear any hint of the ukulele’s jaunty twang—each track seems more suited to being played in an abandoned warehouse, echoing in the darkness around the listener. “People don’t realize how much I use [my ukulele],” she says. In LuvHz, she plays it on every song.

This kind of ingenious attitude defines Mendoza’s creativity—the ability to take one thing and grow it into something else entirely. LuvHz is sonorous and rich, and each track swells with oceanic, synth-driven textures. Tones are deliberately dissonant in a way that never makes the listener entirely comfortable, even as she bops her head to the Dembow rhythm of “Mucho Más” or the skittering, throbbing bass of “What I Need.” The result is the sort of EP that opens the doors to a new underwater world, revealing layers and nuances with each new listen. Mendoza composed some of the tracks starting from vocal melodies she liked and recorded into a USB microphone; others came from strumming the ukulele while sitting on her bed. Still others came from life experiences “where I need[ed] to get all these emotions out somehow,” she says. All clothing by Priscavera. Shoes by Tibi.

Music was always a way for Mendoza to express herself. She confesses to being relatively shy as a child growing up in Chula Vista, near San Diego. Her mother enrolled her in guitar, piano, and voice lessons as a way to draw her out of her shell. In high school, she began performing in musical theater productions of Oklahoma!, The Pirates of Penzance, and Hairspray. Being on stage improved her anxiety and helped her to feel more comfortable in her own skin. After graduating, she moved to Chicago to study musical theater at Columbia College.

While in Chicago, she realized she didn’t love musical theater per se, but rather the production and performance aspects. Homesick for San Diego, she returned to California briefly and during this hiatus, she decided to move to New York with the idea of studying communications and business. In her new hometown, she started going to raves and pop-up parties with friends. She laughs when she thinks about the memories. “I did that for so long,” she says. “I can’t do that anymore! [Now] by like one AM I want to be in bed.” All clothing by Tibi. All clothing by Gucci.

Still, the experience exposed her to producers within the New York electronic music scene. By then she had started posting ukulele covers on YouTube. Through a friend who knew of her interests, she was introduced to the Brooklyn-based band Gingerlys and began singing with them, an experience which inspired her to take an electronic production course at a school called Dubspot in New York’s Flatiron district. She started writing and producing music nearly full-time—at times staying in her apartment for days to achieve her goal—and uploading songs to Soundcloud.

Mendoza’s music might best be described as experimental pop. Though the phrase discounts her range of influences, which go from psychedelia to techno and more (on LuvHz, she worked with Animal Collective producer Rusty Santos, who’s known for the aquatic textural effects heard on her EP), it’s perhaps the most apt way to describe her approach to music as a whole, as she pushes limits even in her music videos. The video for “Seahorse,” a dreamy, scintillating track off LuvHz, sees her walking on the beach, colored shadows glitching off her as if she were a three-dimensional anomaly in the video’s two-dimensional world. The video for “La Luz,” released two years ago, was filmed with six GoPro cameras to produce a video in 360-degree virtual reality. On YouTube, viewers can use arrows to look elsewhere in the shot as her collaborator, the California-based musician Coastal, rides a Crossfire motorcycle through sand dunes or lights a bonfire on the beach. All clothing by Moncler.

Mendoza is one to naturally draw on a range of influences though. Much has been made of the fact that the EP is bilingual and about its cross-market potential. But for Mendoza, who was born in San Diego, grew up in Tijuana till the age of six, and then moved back to San Diego, this isn’t a gimmick so much as a representation of how both she and many others speak. “I feel like my main language is Spanglish,” she says, laughing. “When I’m speaking in Spanish, I forget words. Sometimes when I speak in English, I forget words in Spanish. My brain automatically mixes and matches.”

It’s this creative potential that she’s reveling in right now, after touring around the United States this summer and making her way to Europe for the fall. When asked what she gets out of being a musician, she says: “It doesn’t feel like a lot of work, it just feels like freedom to be able to do everything I want to do and not having to ask permission.” She says she likes the fact that “even if it’s a crazy idea, I can make it happen.”

LuvHz is out now. Mendoza performs October 18 at Botanique, Brussels.