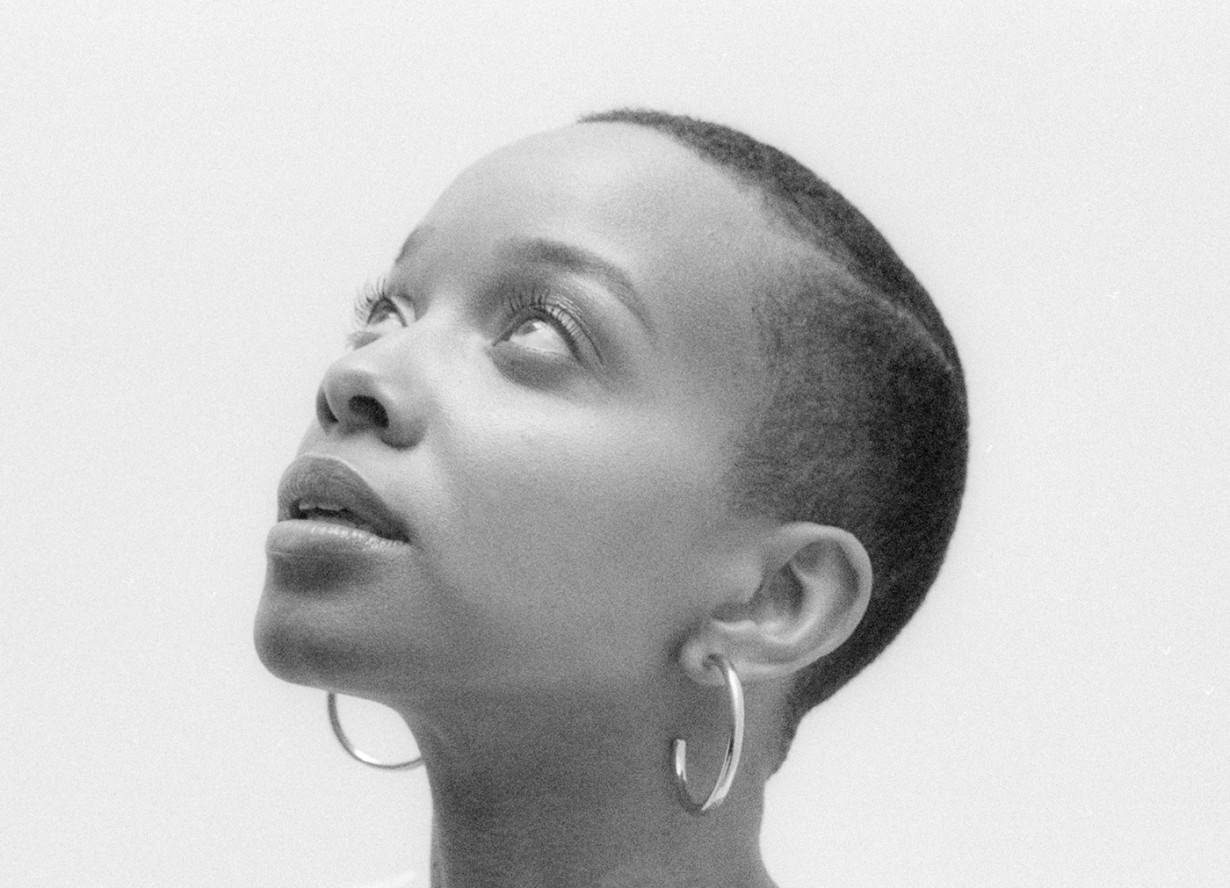 Earrings, worn throughout, by & Other Stories.

“You don’t have to enter a poem through the front door,” says 29-year-old Jamila Woods, the singer/songwriter/poet from Chicago. It’s a week before the release this Friday of her sophomore album, LEGACY! LEGACY!, but we’re talking about poetry. That’s because the new album is almost like a literary-musical work, with lyrics that take center stage. Combining her love for music and her artistry as a wordsmith, Woods assembles a grand homage to her legends. Eartha Kitt. Basquiat. Octavia Butler. James Baldwin. Frida Kahlo. People of color who’ve pioneered their way to become iconic examples of defiance, grit, and creativity. “It’s not biographical,” she clarifies about the album, “but more so like each personal song is very autobiographical to me—but written through the lenses of the different people and what I’ve learned from their work.”

Take the soul-inflected song “Zora,” which is named after Zora Neale Hurston, a woman who defied all odds and dedicated her life’s work to uplifting black culture. Woods reinterprets an essay Zora wrote on self-identity, written in the Jim Crow era in 1928, to shape her own identity. “I feel like I’m writing from my own voice,” Woods explains. “The first verse, ‘Collard greens and silver spoon/Kiss of chocolate on the moon,’ is me talking about being black, growing up in a predominantly white neighborhood and upper-middle-class family. The juxtaposition of things really comes from Zora’s essay, ‘How It Feels to Be Colored Me.’ It’s really me writing about my own experience, but using her tone in that essay.”

Hurston, on the other hand, grew up around black excellence before black excellence was a hashtag. Her skin color wasn’t something she considered less-than or inferior. Even though Woods grew up in white Chicago, she often found herself in all-black spaces. “I remember going to summer camp, where it was culture shock because it was all black kids,” she recalls. “I just felt very self-conscious because in church, people would always be like, ‘Oh you talk white…’ But in school, I had this group of weird, cool black girls who were also from Beverly. We found each other on the train.” Coat by Boss. Shoes by The Row.

By the time her senior year of high school rolled around, Woods was more comfortable defining herself in her own words, just as Hurston became comfortable calling herself the “cosmic Zora”—part of the larger, colorless entity of life. Woods didn’t have to get the Birkenstocks everyone had, nor watch The Simpsons as everyone did. At some point in high school, she found poetry and joined the Young Chicago Authors, a non-profit group dedicated to fostering creative writing and performance. She works there now.

Her day job is just that: a job she does during the day. It doesn’t necessarily mean she’s less passionate about it, as the connotation suggests. In fact, her music directly influences her work as artistic director of Young Chicago Authors. For instance, she turns the creative process behind her album—already a kind of history lesson—into experimental projects for her students. “Last summer, when I had some of the album done, I played it for them and did writing exercises based off of it and had them make their own artistic lineage map of who the people would be that they would write poems titled after and have them write about one of the people on their map,” she explains. “I think that’s what’s so cool about the project of doing this album; learning doesn’t have to be in this sterile classroom type of environment. It can be listening to an album. It can happen in these organic, self-guided ways.” The recent phenomenon of high schoolers willingly signing up for poetry programs is a testament to the resurgence of poetry, especially with the rise of Instagram poet Rupi Kaur. Woods, ever the diplomat, recognizes the value in popular poetry, even if much of the form’s nuance and complexity gets lost in mass consumption. “I think it’s good to have examples of poetry that are so different than what you’re describing,” she says, “because I think a lot of people think of poetry as this lofty, academic, inaccessible form of art.”

I raise an eyebrow, never mentioning names. We both laugh and she adds, “I do think that within poetry spaces, people are like, ‘Ugh! Those Instagram poets are so corny!’ But there has to be a space for it. My best friend and I talk about it all the time like, white people have been doing corny shit for hundreds of years, so why should people of color feel like we have to be a certain type of way? We can be corny. We can be saccharine. We can do those things.”

Woods is full of such insights, an artist whose words exude warmth and thoughtfulness that don’t seem contrived or inauthentic. She is best known for her collaborations with Chance the Rapper, who appeared, along with Noname and Saba, on her first album Heavn from 2016, but she holds a unique standing in the contemporary hip hop and R&B scene. She is a Brown University graduate—and probably the coolest teacher on the planet—who doesn’t consider herself an activist per se, reserving that term for the select few who put their physical bodies on the line, a notion she learned from activist Page May. With deference and careful consideration, she says she prefers to think of herself as a community organizer or an advocate. Like one of her favorite poets, Gwendolyn Brooks, she writes about what she sees. But naturally, as a plugged-in person, sometimes what she sees is a view that needs to be shared. “I chose to study Africana Studies, which I liked a lot,” Woods explains. “They call it the grammar of human life. Basically, it’s the study of how power works. By studying the most marginalized groups of people, you can understand the experience of everyone through that lens. It’s more about philosophy.” Dress by Haight. Shoes by The Row.

Ever the student of life, Woods gives herself prompts to focus her poetry writing and her songwriting, which right now seem to flow together. This practice led to a cover of Nikki Giovanni’s poem “Ego Tripping,” employing the same hyperbole and fantastical imagery in her own rendition. Next came a song inspired by Muddy Waters. Then one by James Baldwin. They coalesced into an album that ranges from beats fit for protests to downtempo slips and slides. At first, LEGACY! LEGACY! may seem like just a history lesson of people past, but interestingly enough, the album references each person by their first name only. The record isn’t really about them and their legacy, although there’s no doubting their influence on Woods and on the world. It’s about how our identities are shaped by our own interpretation and personal agency. Consider this album a bibliography to Woods’s own work-in-progress identity.

“My mom reminded me that I was really mad when I got put into the poetry program and I wasn’t happy, but by the end of the summer, I was like, ‘I love this,’ and that’s what made me chose to go to Brown,” she recalls. “It really changed the trajectory of my life I guess. I think it’s a flash point. It was very important for me just talking about self-expression. It’s more important that I say what I need to say and how to best say it.”