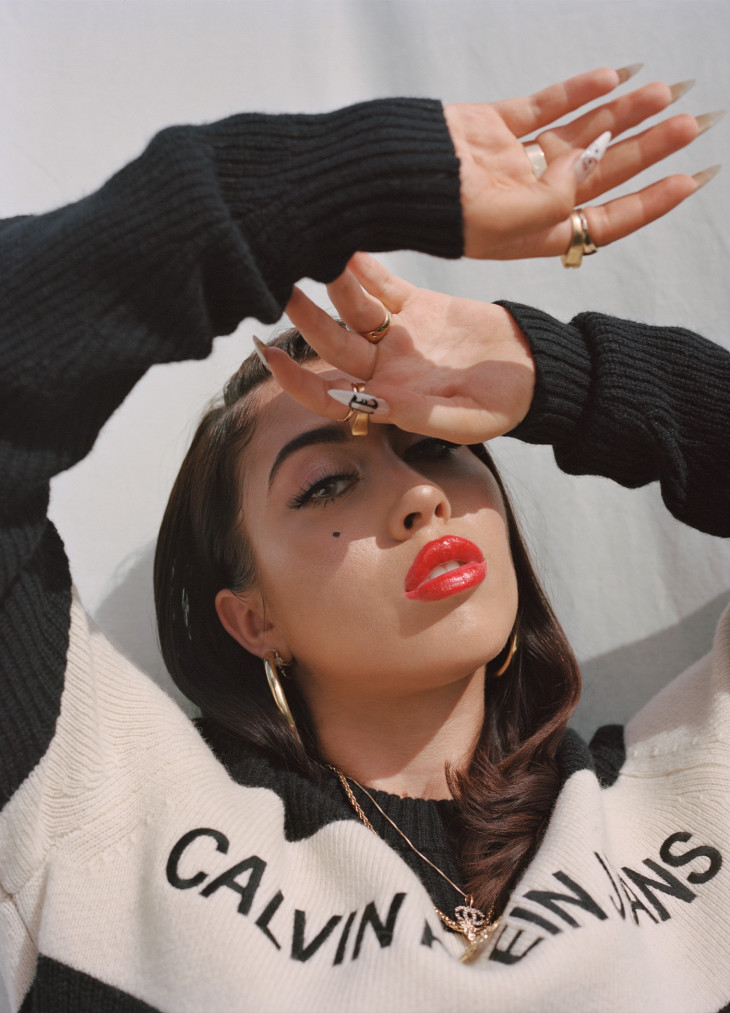 Sweater by Calvin Klein Jeans. All jewelry throughout, talent’s own.

“You don’t really have to be an artist to be somebody who gets a million opinions about you,” Kali Uchis says in an almost-resigned, even-tempered tone that is hard at first to connect back to her soulful singing voice. “I used to care a lot about being misunderstood and trying to control the narrative of who I was but I just let go of that. I think it’s just a personal sense of being happy with who I am and where I’m at in my life and I guess coming into myself as a woman.”

On the surface, the 25-year-old Uchis looks like a cat-eyed femme fatale with a penchant for “mixed media” style made up of vintage and custom pieces that play up the va-va-voom. She’s also a Cancer with “pretty pronounced arches” in her feet who doesn’t do well with heels shorter than four inches. But behind the supernatural glamour, she hauls a story that began when she was a teenager living out of her Subaru Forester. Parked in a supermarket lot, the car was where she wrote the song that concludes her first LP, Isolation.

The album, released last year to critical acclaim (“A fascinating début album!” “A star turn!” “Rich, self-assured, and deeply personal!”) features a cover with Uchis reclined on luscious lapis silks. They seem to match the equally lush tracks that bounce between reggaeton and funk, doo-wop and pop, boasting an impressive list of collaborators like the Grammy-nominated Steve Lacy; Jorja Smith; Tyler, the Creator; and the producers of Frank Ocean and TV on the Radio. But it’s her voice, a sonorous alto oft compared to Billie Holiday’s and Amy Winehouse’s, that draws listeners into her charmed world.

Like many artists, Uchis scours her personal history for lyrics. She was brought up by immigrant parents, living between Colombia and Virginia. Despite what may seem like topics attuned to the issues of 2019, she rarely goes overboard with the social justice matters as she croons over languid beats.

Take the song “Miami,” with its decidedly West Coast rhythm and a hint of gangsta rap, which is best listened to with the top down. It’s the second track on the album and immediately thrusts into her tale: “When I was just a little girl, had my sights set on a bigger world/Got myself a visa and started catching flights to where the grass is greener.” Quickly she clarifies: “Why would I be Kim? I could be Kanye in the land of opportunity and palm trees.” Uchis challenges the American dream with hazy bubblegum pop, as if to say to fans and fellow immigrants that the most radical thing they can do is thrive harder than the rest, despite all the rules set up against them. Over the summer, Uchis headlined Selena for Sanctuary, a free concert in Central Park themed to the late Mexican-American singer in support of immigration rights. Not only is Uchis a huge fan of the iconic, influential musician, but she wanted to support those who come from a background similar to her own in the best way she could. When it comes to politics, however, she prefers to let her art speak for itself. “I feel like we’re definitely in more politically charged times,” she offers. “It’s hard to be fully an activist when you’re also an up-and-coming artist but I try more than anything to use my platform the best that I can. When I get the opportunity to do something like [the Selena for Sanctuary concert], I always will. I started my own charity in Colombia with my dad and we just do little things to try and help in any way that we can.”

The charity is called Visión Valores y Vida. There is no website yet, but supporters are activated through Uchis’s Depop account, where one hundred percent of the proceeds go directly to buying medicine, groceries, school supplies, new shoes, household appliances, and even construction materials for disadvantaged families in her hometown of Pereira, Colombia. “Sustainability is another big part of the charity. We’ve been building houses in Colombia completely made out of one-hundred-percent recyclable stuff, like all of the glass in the house is made from old, bulletproof bank teller glass,” she adds with the earnest excitability of a child. “That’s going to be our family’s first home and it’s also going to be where we bring teens and their parental supervisors to come and learn about sustainability, respecting each other, and regular shit that people should learn growing up that people don’t really teach.”

As someone who also grew up with immigrant parents, I immediately understand the real value of a place like that. Americans like to call them “community centers,” but what Uchis is building is something more. Something more crucial. Something she was lucky enough to have. It’s not uncommon for immigrant families to send money back from the “land of opportunity” to relatives. But what Uchis is sending back isn’t just cold, hard cash; it’s opportunity itself.

Surrounded by titas and titos at home, Uchis understood early on the privilege of growing up away from the guerilla warfare in Colombia and getting an American education. Her parents raised her to share her time and support people who didn’t have the same opportunities, whether that be minorities or LGBTQ people or immigrants. “I grew up going to gay parades when I was little and it’s always been a part of my life,” she says. “Even when it comes to immigration stuff, my house was the house that you passed through when you came to America to get on your feet.”

But perhaps the most impressive part of Uchis’s story, which she doesn’t say outright or write blatantly into her songs, is the uphill battle of convincing your parents you want to pursue a musical career, or any career that doesn’t promise financial security. Imagine the desperate, Lady Bird-esque need to get the hell out, combined with the hustle and ambition of someone living in the country conditionally—it’s the perfect storm. “I think for anyone else who may not have had the most support or didn’t really have an upbringing like an artist or musician, I would tell them just keep learning on your own,” she says. “I would say to take risks when you’re young because when you do everything the way everyone expects you to, you don’t really get to see results in your life.”

Uchis’s talent and style weren’t bought and paid for. They were born by sheer audacity of spirit in the most uninspiring of places (in the car of a parking lot) and under the most hopeless conditions (coming to terms with the shittiness of the American dream you were sold on). With that, ironically, she is fulfilling the very dream she was intent on dismantling. Whatever artifice this country’s narrative possessed for her, it’s now real because she’s created an entire lucid world around her story.

Isolation is out now. Kali Uchis performs at Austin City Limits on Saturday. See this full story and many more in print by ordering your copy of the Fall 2019 issue here.