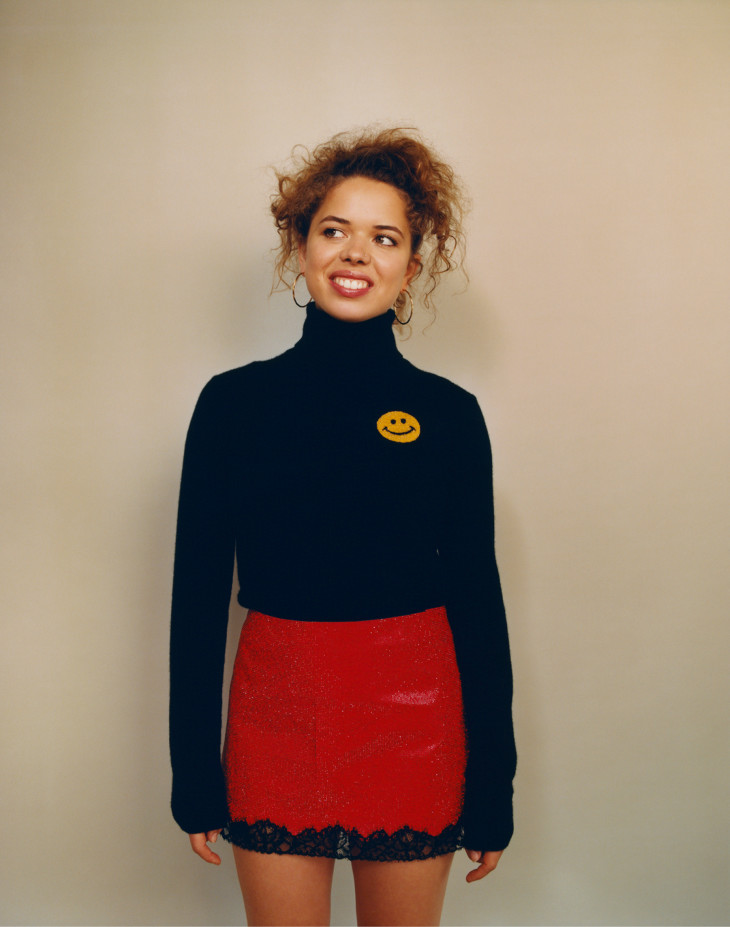 Sweater by Bella Freud. Skirt by Philosophy by Lorenzo Serafini. Earrings, worn throughout, by Maria Black.

In the 1934 essay “On Pain,” the German World War I veteran Ernst Jünger argued that “nothing is more certain and unavoidable than pain.” If pain is a necessary constant though, then we have the right to question its role in our lives. “Do you like pain?” the British singer and guitarist Nilüfer Yanya asks in “Baby Luv,” her breakout single from 2017. “Again, again, do you like pain?” Though it’s unclear whether she’s asking herself or the offender, as she builds the refrain up, the question reverberates philosophically, to the point of feeling cathartic—particularly if you’ve had your heart broken recently.

Indeed, Yanya’s synthesis of raw, soul-searching reflections and sparse, guitar-driven melodies may be one way to deal with the emotional forces of our modern burnout age. If her music is not minimalist per se, it is at least spacious, and sparse, enough to offer enough room for reflection, the auditory equivalent of escaping into a forest with room for one to heal. “None of my music’s, like, great to dance to,” she admits. Top by Chalayan. Trousers by Ganni. Sneakers by Nike. Necklaces by Cornelia Webb and Maria Black.

Yanya, twenty-three, draws on a range of influences for her music, from indie rock to jazz, to powerful effect on her début album Miss Universe, released earlier this year. Born and raised in West London, her parents, both artists, filled their household with everything from Mozart to traditional Turkish music. Though she grew up playing the cello and the piano, she feels most comfortable on the guitar, an instrument she was drawn to by her love of the Strokes and the Libertines; she also cites Lianne La Havas and Anna Calvi as guitar players she admires.

When she was younger, she would write songs every day before she went to bed as a way to make sense of life. Before she finished primary school, she set herself the goal of learning to play the guitar. In high school, she had the opportunity to learn guitar from Dave Okumu, of the Mercury Award-nominated band the Invisible and a Jessie Ware collaborator. He encouraged her to create her own material. Drawn to songwriting, she began attending the Saturday programs offered by the prestigious Guildhall School, where she learned from the composer and vocalist Sorana Santos, who currently teaches music at the University of Oxford.

Writing, Yanya says, is what “validates me as a musician.” She adds: “The rest of it’s cool but you don’t have so much control of how people see it or how people like it.” Though she had previously tried composing on the piano, “on the guitar, I could see it. I guess everyone has a sound in their head.” Often, she starts with that internal inkling, before exploring where the song or idea will go. Intuition characterizes her process, guiding her to create songs doused with impassioned atmosphere as her voice spans a human spectrum of emotion. When she writes, she records the ideas into her phone as they come, meaning that songs might take anywhere from “a couple of days” to a year to write. Even when collaborating with her sister Molly, who is six years older, their process is “fluid,” she says. “We’ll just talk about something, do some brainstorming, maybe one of us will have a stronger idea,” as they text and share images and videos with each other. Though they both have their individual tastes, they tend to share an affinity for visuals that are “not reality, not fantasy—surreal, that’s the word,” she elaborates. In 2014, she posted her first track, “Waves,” to SoundCloud, the first indication of her flair for introspection conveyed in simple but poetic terms. Two years later, she released the EP Small Crimes, followed by another EP, Plant Feed, in 2017. She was working in a dress-up shop in Hammersmith, not too far from home, when she heard her music being played on Amazing Radio, a UK-based digital radio station focused on emerging artists—they also played Haim, Bastille, and London Grammar in their early days. She describes the moment as slightly surreal. “For a minute I was taken out of my job, I didn’t feel like I was present,” she recalls. At the end of 2017, the BBC placed her on the longlist for its Sound of 2018, which also included Gen Z pop superstar Billie Eilish, R&B experimentalist Khalid, political rocker Sam Fender, and electronic innovator Yaeji. “That was cool,” she says. “It feels quite official when you’re recognized by them.”

As her profile grows, she’s had to come to terms with all that entails—and quickly. Miss Universe landed her a spot in Pitchfork’s Best New Music series in March and she played the legendary Glastonbury Festival last month. She is currently preparing for a run of North American dates, including the Newport Folk Festival, but admits she finds touring exhausting. “Even though you’re doing what you love, your mind starts to play tricks, and the voice telling you you’re not worth it for everyone” comes up, she says. “It’s part of the process.” For Yanya, her long-awaited album release especially was a turning point, one she is glad to have come through completely intact. “I think releasing an album is quite scary,” she offers. “It didn’t feel scary before, but with smaller releases, you don’t have to think about it as much—it’s only two or three songs. Putting a whole piece of work out, it’s quite intense. You have to detach from it. And if you do think it’s great, you have to move away from it and do something else.”

This kind of maturity was evident in her single “Heavyweight Champion of the Year,” which closes out Miss Universe. Playing her guitar in a mansion that’s not quite as resplendent as the one in Taylor Swift’s “Blank Space,” Yanya unleashes slow-burning rage at a noncommittal partner, allowing it to simmer under her control, but also comes to acknowledge her limits. Towards the end of the video, several pool boys carry her limp body out of the property, and the clip finishes on a lingering shot of her discarded angel wings, floating in the pool. She says the song captured the state of being exhausted, both physically and mentally—but “knowing the desire is still there to continue.”

Miss Universe is out now. Yanya begins her North American on July 23 at the Music Hall of Williamsburg. Top by Chalayan. Trousers by Ganni. Necklaces by Cornelia Webb and Maria Black.