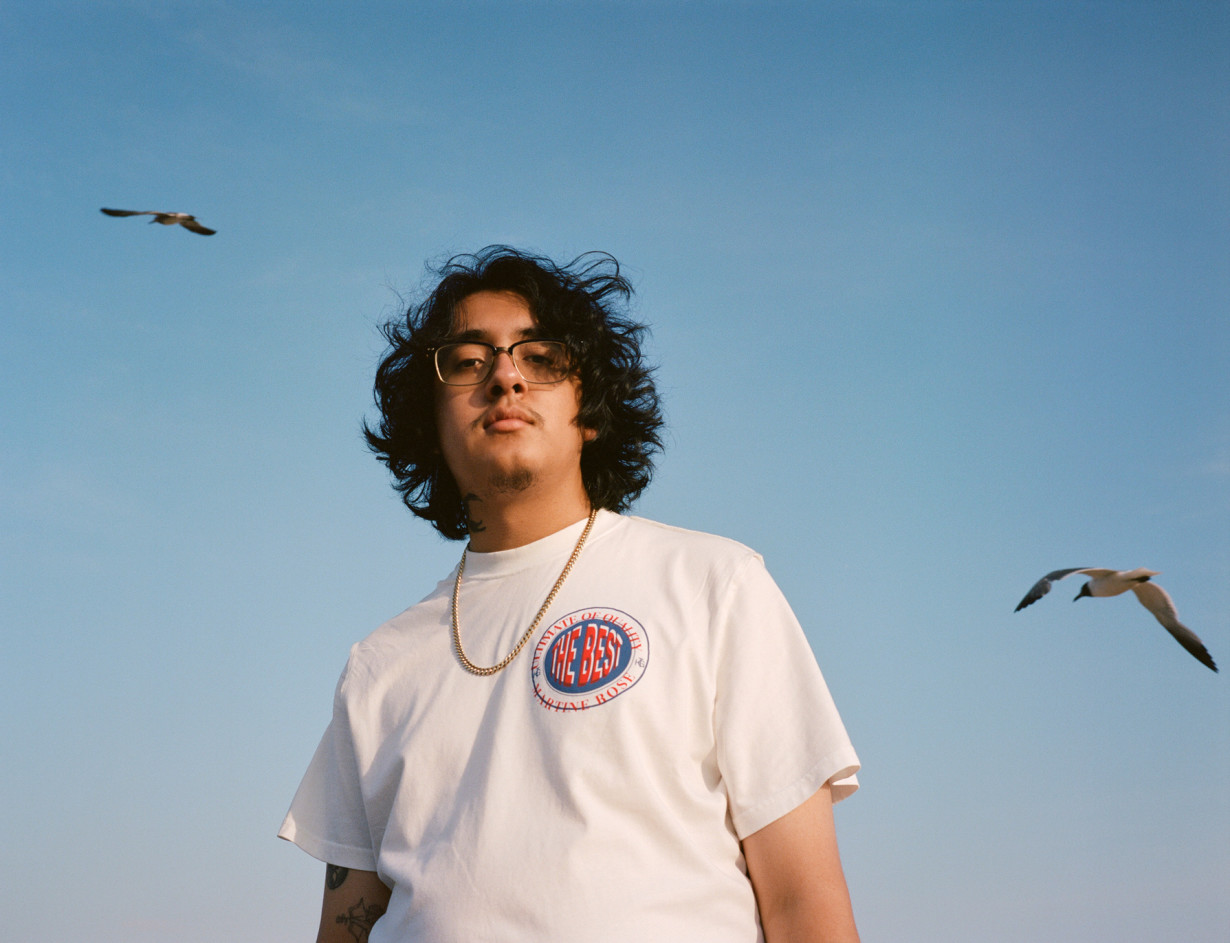 T-shirt by Martine Rose. Necklace, worn throughout, talent’s own.

Cuco doesn’t like horchata. Or cotton candy—news which is revealed during an interview on a Friday afternoon on the Coney Island boardwalk in Brooklyn. Sweets and junk food aren’t on his list of priorities, either. In fact, the 21-year-old Latinx alternative singer, instrumentalist, producer, and teen heartthrob from Hawthorne, California, doesn’t eat past seven PM.

At this point in his career, Cuco, whose real name is Omar Banos, is prioritizing healthy food and exercise while continuing to maintain an intense touring schedule that has spanned every major continent. “I’m mostly eating better these days,” he says. “I love tacos, man, and I can’t be vegan, it’s too hard. I love the loncheras in Lennox.” Lennox is a neighborhood near his home in Southern California where loncheras—stationary food trucks found throughout Los Angeles—proliferate in abundance.

Cuco has also just released his first album, titled Para Mí, with songs that reflect his older, dreamy style and sound but also offer listeners something new—like a rebirth following a spiritual transformation, or a near-fatal car accident like the one he and his bandmates experienced in October 2018 on a highway in Tennessee. T-shirt by Martine Rose. Trousers by Barragán. Sneakers by Converse.

Most people his age would long for the limelight and attention that being a successful musician can bring, but it almost seems like Cuco wants nothing more than to be out of the public eye. “This fame thing isn’t really for me,” he says while licking an oversized lollipop on the sand overlooking the water. “I just want to make music, but I’m also ok with just producing in the future behind the scenes.”

Maybe it’s Cuco’s humble beginnings that give him his perspective on life. His parents immigrated to Los Angeles from Puebla and Mexico City and, like other Mexican immigrants in Los Angeles, knew some of the same people and began dating. They struggled to make ends meet so they took on odd jobs and Cuco’s father began working as a photographer to support the family. Seeing his father develop film in the family’s kitchen sparked a passion for photography for Cuco. “My dad wanted to be a journalist, but then he became a photographer and used to turn our kitchen into his darkroom,” he says while holding onto his Olympus point-and-shoot film camera. He eventually began shooting weddings with his father and learned how to use the family telephoto lens. He continues his pastime to this day, snapping photos on his camera throughout interviews and on tour.

His parent’s music choices also impacted his own musical taste. “They played all the boleros and all the cumbias,” he said. A few days after this interview over the summer, Cuco performed in the second annual Selena for Sanctuary concert in Central Park organized by his manager, Doris Muñoz. “I’m kind of nervous about it,” he said. He also had a show coming up in El Paso, Texas, for an organization called Raices, the Refugee and Immigrant Center for Education and Legal Services. He remembers going back to Puebla every winter with his parents to visit his family. “They got a lot of churches out there,” he described, referring to the myth that the Mexican city has a church for every day of the year.

Playing in Mexico City was also the highlight of his recent Latin American tour. Maybe it was because his fans showed up in full force, or maybe it was being able to meet one of his childhood music idols, Rubén Albarrán, from Café Tacuba. “Mexican fans really support their artists,” Cuco says. “It felt really great to be there with him.”

His Mexico City fans would probably have liked to know which drink he prefers. It’s Jamaica, the dried hibiscus flower sugar-infused drink. It tastes great. And that’s probably why Cuco prefers it.

Para Mí is out now. T-shirt by Martine Rose. Trousers by Barragán. Sneakers by Converse.