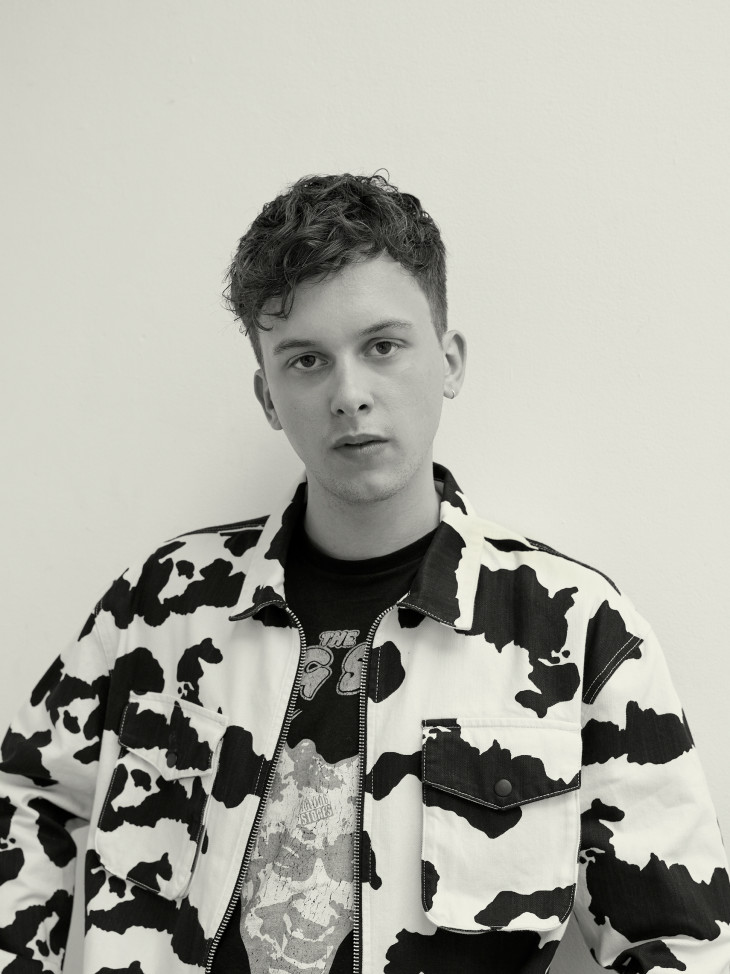 Jacket by Collusion. T-shirt, talent’s own.

It’s open mic night and the name Ten Tonnes is written across the colored bill, demanding attention from its potential audience. This was the exact effect the UK artist Ethan Barnett was hoping to create when he first started trying to pursue music as a viable career and, needless to say, the name stuck. However, what kept people coming back for more was his signature indie pop sound of infectious, playful chords and easygoing vocals. Before his début album even dropped earlier this summer, Barnett’s musical career was what every aspiring artist dreams of. Armed with only a few self-released tracks, his light, breezy style generated enough buzz to make him a featured artist at the popular Reading and Leeds Festival three times, as well as open for the band Stereophonics and his brother George Ezra at Wembley Arena. “Yeah, my brother and I might end up having like an Eagles-type band when we’re in our fifties or something,” he teases. Still, all jokes aside, it’s clear that Barnett and his music will be around for years to come. His self-titled début album is a triumph in jubilancy, showcasing how less is often more in creating a sound that’s as timeless as a warm summer night.

Despite his enviable beginnings, Barnett’s success is backed up by his unwavering dedication, hard work, and personal growth. As a teenager, he spent most of his free time uploading his songs to SoundCloud, sending out CD’s, and emailing venues for potential gig opportunities. His persistence earned him his first-ever gig at the age of sixteen, which was both equal parts exciting and terrifying. “When I first started out, it was the scariest thing in the whole world. I didn’t look at anybody. I just used to stare at the ground and watch my hands play the chords,” he reminisces. “I’m still not a big fan of the in-between song chat, so I’m constantly trying to work on my stage presence. But when I’m on stage playing it’s my absolute favorite thing in the world.” Playing at such large-scale events has not only helped boost his confidence but has also encouraged him to stay present in his surroundings: “Now I just try and take it all in. I try and look around and appreciate where I am.” Considering what he has already accomplished, it would be easy to assume that Barnett aspires to continue playing at big arenas for even bigger crowds, but that is not the case. As a singer-songwriter, his main goal is to create a connection with his audience and share in a memorable experience. “I’d rather play for a thousand people that were really interested than ten thousand that don’t give a shit,” he reasons. “Obviously playing for a bigger crowd is always great, but as long as the audience is listening then it doesn’t really matter how many people are there.” Still, having someone to share his music with is integral to who is he is as a musician. “If I’m just playing to nobody then I might as well just be in my lounge playing my guitar,” Barnett laughs. “It’s funny though because I was talking to a guitarist the other day and he said that the crowd didn’t really have anything to do with his enjoyment of a gig. He was just more focused on playing with the rest of the band, whereas I think as a singer I’m trying to connect with everybody in the room, so for me, without the crowd, it’s kind of pointless.”

Barnett’s ambition to create a meaningful impact with his music has only amplified since being signed to Warner Music, but the whirlwind experience has taken some getting used to. After being a self-releasing artist for so many years, it was strange for Barnett to suddenly have a whole team of people designated to him and his album. “When you sign your record deal, that’s when the hard work really starts, because you have to release good songs that everyone’s happy with,” he explains. The added pressure, he emphasizes, has been a healthy one, pushing him to create more polished songs that will help him reach an even greater audience. “It’s a great thing to have a good team of people who can help you with different aspects of your music,” he says. “I still like to keep control of the songs that I write and release, but it’s nice having other people there that put me in contact with different producers to help elevate what I do.” Jacket and trousers by Filippa K. T-shirt by Polari. Sneakers by Diadora.

All the extra care that went into his début album definitely shows, as the result is a catchy collection of summer anthems that listeners will want to dance and sing to over and over again. The instrumentation is simple, featuring two guitars, a bass, and some drums, delivering a laidback yet punchy sound that keeps the energy high throughout. Barnett admits that while many modern indie UK bands, like the Arctic Monkeys and the Strokes, influence his sound, his main inspiration comes from an earlier time. “I think at my very core of my songwriting, I’ve always been drawn to nice Beatles-esque chords,” he explains. “I’ve always loved how John Lennon would write sad songs like ‘Help!’ but then disguise it in this happy, poppy tune, which I also really enjoy doing.” His song “Better Than Me” closely reflects this sentiment, as Barnett cheerfully sings about feeling like a loser in life, congratulating those who have seemingly had it easy. It’s a relatable feeling that the musician balances with fun, light chords to maintain the song’s sense of hopefulness, which would otherwise be lost.

If there was one thing that Barnett learned with the release of his first record, it’s that his excitement for songwriting has not slowed down one bit. His eagerness to work on songs for the next album has him always “switched on,” even when he’s relaxing. Keeping himself open to ideas means being inspired by something as simple as a dream, the mood of a film, or an overheard conversation. Despite his keen attitude, Barnett says that he runs into creative blocks more than he would like to admit. “I used to just try and plow through and keep trying and trying and trying, but now I think it’s beneficial to just take a step back and take a little break for a couple of days and remind myself, ‘I don’t need to write a song every day. It’s fine.’” As frustrating as these lulls are, the extensive collection of notes and voice memos Barnett keeps on his phone are a good reminder that he still has an abundance of ideas to experiment with. Something Barnett hopes to explore more in-depth moving forward is slower, more reflective songs. “Missing You” is notably the only slow tune on his album, describing the love/hate relationship one has with his hometown and how it can be a place of both comfort and heartache. Having kept the rest of his songs more fun and buoyant, he purposefully finishes off the album with the track as a small hint of what’s to come. “A couple months ago, when I first started writing songs again, everything I was writing was a ballad and I was like, ‘Oh fuck, my second album is going to be so slow!’ Complete opposite of the first!” He laughs adding, “Since then I’ve written some more lively songs, so hopefully, it will be a good mix.”

Regardless of where his career might take him, Barnett’s dedication to leaving a lasting impression on his audience, even after the hundredth listen, is what makes his music so irresistible. “I try to make sure that everything I do is a bit different and progressive in some way,” he says, an emphasis which really shows in each playthrough of his album. There are always more melodies to discover that both invigorate the spirit and warm the heart to keep the listener pressing repeat. It’s hard to believe that this is only the beginning of his career, but Barnett’s growth as both an artist and a performer is exciting to watch and ensures that there will be even more modern indie classics to come.

Ten Tonnes is out now.