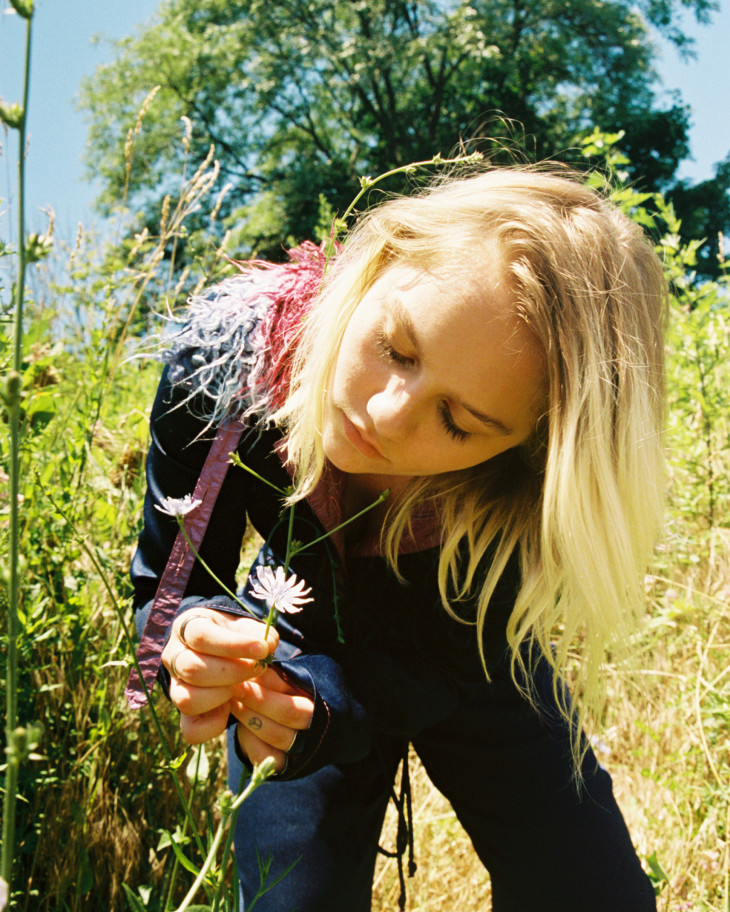 All clothing by Sies Marjan. All rings throughout, talent’s own.

At just nineteen years old, Carlie Hanson has the kind of life we only read about in stories. Hers is the ultimate rags-to-riches tale, starting out at a McDonald’s in suburban Wisconsin and working her way to teen pop idolatry. After self-releasing “Only You,” her second single ever, online in 2017, the climb to fifty-five million streams swiftly earned her a record deal with Warner Brothers.

She lives in Los Angeles now, adjusting to big city life without her mom, sisters, and dog. Hanson spends most of her time driving between the studio and her apartment, where she’s likely watching Euphoria, learning how to cook something more advanced than mac and cheese, and scribbling in one of her many “ugly ass” notebooks she buys from CVS. “My songs are literally my journal,” Hanson says. “Almost everything I write comes from a little note I’ve written down or a voice memo.”

The majority of it, she says, is totally unusable beatboxing and nothing is organized. But she does remember the good parts, bringing them to sessions with one of her favorite producers, Big Taste (Leroy Clampitt). One voice memo, for example, turned into the track “WYA,” off her début EP Junk from earlier this year. Oozing in alt-pop lilts and flourishes, Hanson belts, “Did you grow up a little too fast, girl? ‘Cause if you did, you can always go back girl.” Left: Sweater and necklace by Balenciaga. Hat, stylist’s own.
Right: All clothing by R13.

For all the adulting she’s accomplished in the last year, Hanson knows she can always go back to her family and friends in Wisconsin. She does get lonely sometimes in Los Angeles, where it’s perennially difficult to meet new friends—especially when you’re underage and can’t go to bars. She had, however, managed to meet someone. But it was complicated. “I got to a place when I was dating my now ex-girlfriend, where I was so sick of hiding it from my family, my friends,” she explains. “I’m such best friends with my mom and it was super weird not to talk about it.”

As with many young people her age, Hanson considers sexuality to be a flexible label. Much like her music, it refuses to be boxed in. As this fluid, ever-evolving facet of her life, coming out to her mom happened in a very 2019 way. Her mom, who had access to Hanson’s Dropbox of music, found a new song with rather spicy lyrics. They were texting and Hanson asked her mom if she listened—like really listened—to the lyrics. An ellipsis bubble later, her mom answered. “I’m freaking out in this session like, ‘Holy shit, is she going to find out right now while I’m in this session trying to write another song?'” Hanson recalls. “She responds, ‘OMG…’ It was such a weird way for her to find out, but I’m kind of glad it happened that way.” Coat and top by Sies Marjan. Jeans, stylist’s own. Sneakers by Adidas.

Left: All clothing by R13.
Right: Top by Sies Marjan.

Hanson reflects on it now as a modern way of coming out. Instead of making it a big, anxiety-driven “sit down” thing, it was sort of brought up in casual conversation—over text, no less. Her mom, at first taken aback with surprise, quickly came around to it. Ever the empath, she knows her cohort wields a kind of privilege that older generations didn’t get to exercise. “They didn’t grow up in this time where literally everything is in your face,” she says, “so I understand.”

Further proof of radical self-acceptance is another standout song called “Us,” released last year. Deliciously catchy in the way only the best pop music can be, it’s an “us vs. them” anthem for all the ladybirds and goldfish on their way to breaking out of what keeps them back. “I don’t like thinking about this, but just as an example, back in high school, I felt like a complete outsider,” Hanson explains. “I went to a school where I totally didn’t feel like I belong: There were a bunch of rich kids with families where the parents owned businesses in the city. I did not like that at all. I felt completely different from all of them.” All clothing by Sies Marjan.

Being honest about herself is now a priority for Hanson, and a productive one at that. She says she wants her music to help other people like her: “I just want to be someone for people who don’t know how to be themselves. I want to be the outlet they can go to to gain that confidence to just be whoever you want to be.”

With her charm and track record—having toured with Troye Sivan and Yungblud, she opens for Lauv in Australia and New Zealand in November—Hanson is well on her way to reaching icon status. Her music has the kind of mass appeal to do just exactly that. (Justin Beiber is a big influence, after all.) But what sets Hanson apart is her unapologetic optimism in the face of a world that’s constantly beating you down. All clothing by R13.