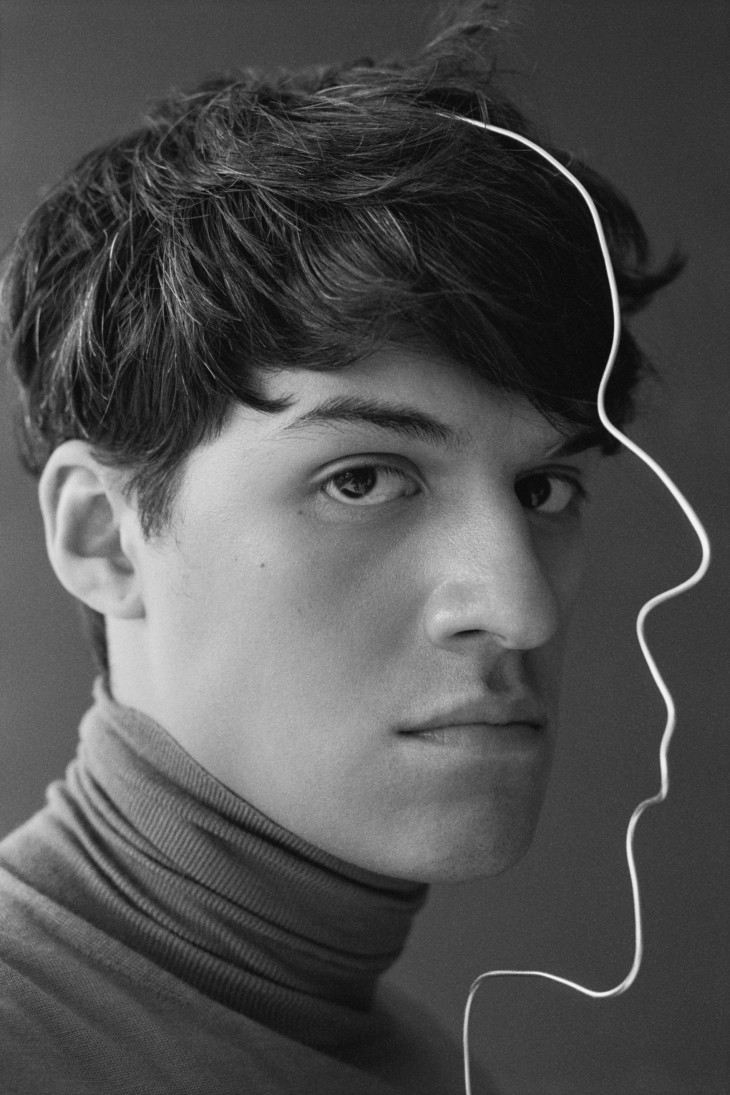 Twenty-two is old enough to have experienced heartbreak, and Omar Velasco, the Mexican-American indie singer who records as Omar Apollo, is more than happy to remind us of that. On both his début EP Stereo, released in 2018, and his follow up, Friends, released last year, the artist articulates the uneasy in-betweens of romance with uncanny veracity. Weaving soul, funk, indie acoustic, and R&B together, in Velasco’s world, there’s little black and white; what dominates are the various shades of gray that define a world where love can sometimes feel like a lifestyle choice.

What’s definite is that 2019 was a bumper year for Velasco. In March, he played at South by Southwest; a month later, he performed his Coachella début, a gig he enjoyed but found intense—he says he had to take a nap straight after it, once the adrenaline had worn off. For the rest of the year, he toured around North America and Europe. At the end of October, he released his first song sung entirely in Spanish, “Frío,” a sultry track that cloaks an echoing dembow beat with a resentful tale of waning love. A week later, he dropped “Hit Me Up,” with rapper Dominic Fike and producer Kenny Beats, which somehow distills the wavering emotions of caring and not caring about someone into an easy-listening funk song. Coat by Stella McCartney. Trousers and boots, worn throughout, talent’s own.

Velasco hails from Hobart, Indiana, the son of parents who migrated from the state of Jalisco in Mexico—first his father moved, in 1979, and then his mother came thirteen years later. His parents opened a taco restaurant an hour outside of Chicago and raised Velasco, his two brothers, and his sister while playing Pedro Infante, Vicente Fernández, and the Beatles around the house. They also took their kids to Catholic church, where Velasco found a love of performance both as part of the choir and while dancing in the baile folklórico his mother enrolled him in.

When Velasco was twelve, he asked for a guitar for Christmas. His parents gave him an electric guitar, but without any extra equipment—or any idea what to do with the instrument—he ended up swapping it for an acoustic. An uncle started him off with three chords—E minor, A, and D. Velasco has an impressive ability to absorb musical material, and he learned everything else he knows about guitar by emulating other guitar players at church and from YouTube. Even now, his songs are almost academic in the breadth of genres they reference. When he writes, he’ll create playlists and listen “all day,” he says, drawing out elements he likes—a drum pattern or a harmony—to learn from. As a result, his tracks are buttery rich with influences that range from Prince, Sly and the Family Stone, and Evelyn “Champagne” King to James Blake, Bad Bunny, and Eighties house. “It’s just nice to learn about this shit,” he says, referring to his musical nerdiness.

But music is also a way of exploring worlds other than our own, and Velasco’s music comes as much from the sounds he felt were absent as the ones that were present. He began composing as a response to the songs around him—“There wasn’t a lot I liked,” he confesses—and would make his own arrangements. He describes the feeling of making songs that felt right as “an addiction, an obsession.” That, and his reaction when people enjoyed his tracks, drove him while he was still learning how to make the music he wanted, even though the feedback from his friends and father at the time was blunt: He wasn’t good at singing. But Velasco shrugged this off. “It was just advice,” he says. “If you know yourself and you know your flaws, you’re like, ‘I know better.’” As he practiced and began performing gigs, “a couple of kids I didn’t know would show up and they’d be singing the lyrics,” he recalls, “and I’d be like, ‘Woah,’ and that’d be enough for me.” When he finally uploaded his first track to Spotify in 2017 at the behest of a friend—who also paid the streaming service’s artist’s fee, since Velasco couldn’t afford it at the time—“Ugotme,” recorded in the attic where he was living, received fifty thousand listens on its first day. The song, with its seductive, bluesy rhythm and lovelorn uncertainty, captured something in the zeitgeist, an indecisiveness that’s so much a part of modern romance. “I think that I’m barely in love,” he croons in the first verse, unsure even of the existence of the emotion; by the next verse, he’s singing, “I’m so in love with you,” without any trace of uncertainty in his voice.

Even when he’s not singing about relationships, his subject matter is devoid of braggadocio and sticks to the down-to-earth; he’s still one of us, even though his start to the new decade involves playing with The 1975 and Charli XCX at St. Jerome’s Laneway Festival around Australia and New Zealand. “I left my peace in the sheets/I don’t know why I’m still here/When I should be asleep,” he sings rather existentially in “Today,” his single off the Skate Kitchen soundtrack featuring producer Teo Halm. In “Hijo de Su Madre,” he raps: “Indiana kinda hot for my biceps,” and, after a beat, drops a self-deprecating punchline, “I ain’t really got no biceps.”

But romance is where his songs feel so intimately relatable that they send chills up the spine. “You just thought I just wanted to be friends,” he sings over an acoustic guitar in “Friends.” “It’s just nice to meet you anyway/Didn’t mean to scare you yesterday/Thought you wanted all that I could bring,” he croons in a tender falsetto on “Trouble.” His voice evokes a plaintive heartbreak, the kind that can hit viscerally and make the body physically ache. He says “Friends” and “Trouble” are probably the songs closest to his heart. “They’re songs about someone [who doesn’t] love me back,” he says. “They’re personal shit.” Jacket by Bode. Trousers, talent’s own.

Like other Mexican-American artists such as Cuco and Jackie Mendoza, Velasco’s not afraid to be bilingual, or, in the case of “Frío,” leave English out altogether—a move that appears almost defiant in an age where simply speaking Spanish can result in threats to call ICE. He says singing a whole track in Spanish made his dad happy though and also allowed him the chance to “revisit” the reggaetón he heard growing up at the barbershop where his mother worked.

Indeed, Velasco’s story is often told through the lens of a small-town boy who’s made it to the big city (he currently lives in Los Angeles with one of his brothers), or as the successful product of the immigrant American dream. He’s very aware of these narratives, which is perhaps another reason why the psychedelic, haunting sounds of “Frío” feel quietly radical, in the way they challenge what reggaetón and música urbana could be. “When people are learning about music, I want to make music that opens to other stuff and keeps them open-minded,” he insists. But most of all, “I want to be there for younger kids, older kids,” he says, “[and] let them know they can do anything.”

All clothing by Bode.