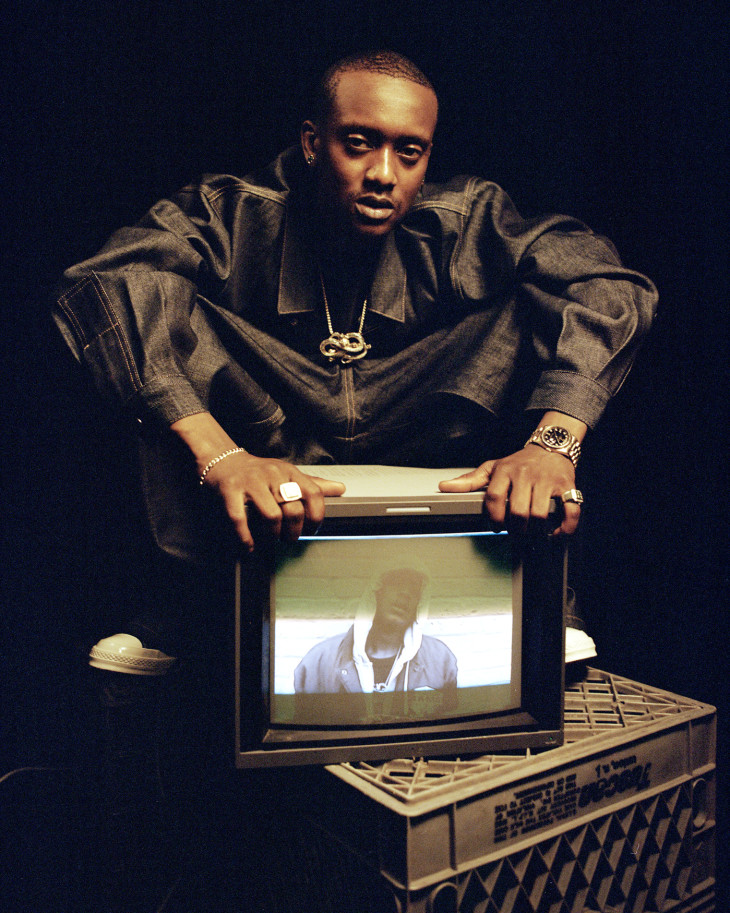 The 25-year-old rapper Simmie Sims III got his stage name Buddy from his little sister, who used to have trouble pronouncing the word “brother.” It’s the only real name he’s known since, setting the tone for his carefree approach to both music and life. In fact, his early years takes center stage in his latest album, Harlan & Alondra, which is named after the Compton cross streets where he grew up.

He paints a picture of his childhood neighborhood with an unhurried candor. “A bunch of janky bike ramps, basketball hoops in the middle of the street, sideline games in the middle of the street, skateboarding, climbing trees, climbing on the roof,” he elaborates. “My mom and dad converted the garage into a room and watched all these kids. It was very communal, we always had an open door for people in need.” Vintage top from Mr. Throwback, New York. Trousers by Willy Chavarria. All sneakers throughout by Converse. Sunglasses by Retrosuperfuture.

The album carries a similar mood throughout. Nostalgic, unabatingly chill, and reminiscent of Compton rap’s first heyday (the Nineties), it even guest stars Snoop Dogg along with Khalid, Ty Dolla $ign, and more. The difference though is the realness that the tracks exude—a realness embodied by someone who grew up in a world where everything is amplified: 9/11, Trump, Black Lives Matter. There’s a layer of awareness that informs every crisp, sing-songy lyric. It’s his world after all, and we’re just guests in the house of a legacy in the making.

The first track, “Real Life Shit,” begins with a memory of childhood dreams. Down-to-earth vibes match the downtempo beats. There is the sense already that Sims isn’t about outdoing other rappers or showing off. He’s still got goals, like helping his homies and sisters, buying his parents each a house, that reveal a surprising vulnerability not often heard in the genre. “There’s still real-life shit going on,” he says. “Bills got to get paid in my own family. It’s not all shits and giggles all the time. As much as I’m traveling and getting all the love and success that I am, which is wonderful, I still do real-life shit every day.” Contrasting the languid, sunnier opening is the track “Black.” A breathless barrage of “BLACK” is repeated at least sixty-five times (I counted) over a pared-back beat. Black excellence, black æsthetics, black symbolism, black power, black wealth, black race, black rims. The color is recontextualized again and again, in an astonishing fourish minutes of unapologetic blackness. It’s an homage, sure. But more importantly, it’s the product of Simm’s personal journey towards embracing all of what that means. With the help of A$AP Ferg, the two reference Trayvon Martin, Huey P. Newton, and even Ancestry.com.

Sims says later that the song was written during Black History Month. “Once I got into it, I thought, ‘Wow this could be something — let’s not play with this,'” he recalls. “I actually had to sit down, take a step away, and go on YouTube and do some of my own research, look up black historians. It’s for myself because I’m still learning too.”

It’s not unheard of for rappers to lace their output with social justice, especially in Compton’s current scene, but Sims isn’t just ticking boxes. He’s not trying to be superficial about it either, because it is, in a sense, trendy—albeit arduous. “I never want to play the woke world because I had to go through all my research to get that out anyway,” he quickly explains. “I always encourage people to pick up a book, go watch a documentary. Learn something!” Album homages aren’t new, but this one feels different as it traces the process of Sims discovering himself, his sound, his history, his future, all in less than forty minutes. It’s the past, present, and future in twelve deluxe tracks. It’s a self-portrait painted in (what else?) black.

After nine months of being on the road, touring with Joey Bada$$, A$AP Ferg, and earlier this year with Vince Staples, he says he’s been performing that song to crowds of white people every day. Just imagine people rocking out to the chorus of “Black, black, black.” “I see that every night! I just got off tour. All Black History Month, I go from city to city performing that song in front of a bunch of white people. It’s been amazing.” All clothing by Carhartt WIP.

Imagine too, all the kids who have similar dreams listening to this album. It’s not the first time Compton has produced a rapper of this caliber, but it is arguably the first time a rapper of Sims’s unguarded attitude has “made it” in the classical sense. Even if Sims insists he’s not exactly where he wants to be yet, he’s not stressed about getting thee. He’s only twenty-five years old, after all, and has grown since Pharrell took him under his wing.

What is it, then, that makes him so carefree? “I feel like it’s an inevitability,” he says. “If everything happens, it’s going to happen regardless. You could be mad all you want, but it doesn’t change the situation. You could be sad, but it’s not going to change nothing. It don’t tend to really affect my mood. If it don’t affect my pay, it does not affect my day.”

Harlan & Alondra is out now.