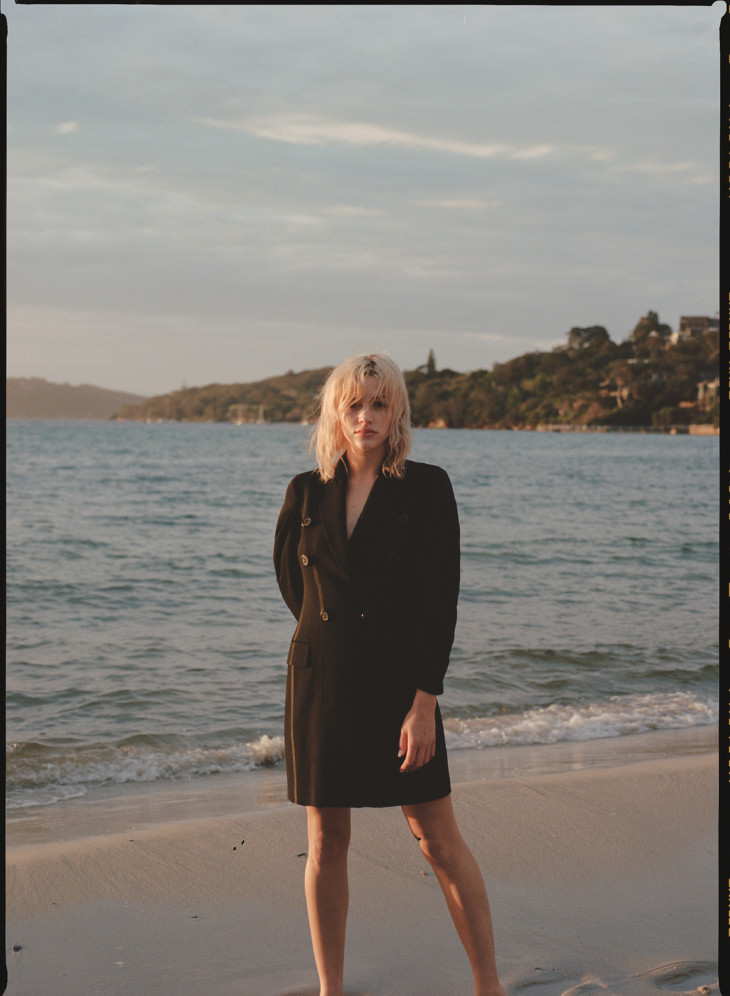 JOY.’s story is one that effortlessly captures the shifting state of modern music. Now performing under the three-letter moniker, the Australian musician Olivia McCarthy first began making music in the privacy of her own bedroom around the age of fourteen or fifteen. A few years on, thanks to talent, luck, and circumstance, the artist wound up traveling Europe with Demi Lovato for her Tell Me You Love Me tour early last year.

After having been classically trained in piano, McCarthy’s career trajectory has been anything but predictable. Today, the twenty-year-old makes soulful electronic pop that has caught the attention of global stars like Lovato—and she is just getting started. “That was definitely a career highlight for me,” McCarthy says about touring Europe with the pop singer and actress. This serendipitous pairing came about when Lovato stumbled across McCarthy’s work online and subsequently named JOY. one of her favorite new artists via Twitter. A few months later, McCarthy was invited to support the global star on her European tour, a huge leap forward for the burgeoning musician. “We were on the road for three months, but it was twenty-one shows pretty much consecutively,” McCarthy explains. “I had never done more than three shows before that, but I think it was good to be thrown in the deep end.”

Traveling around on a giant tour bus was an unforgettable experience, McCarthy says: “It’s cool because Australia is not like Europe at all—here you drive for hours and you’re in the middle of nowhere. But in Europe, you drive for a few hours and you’re in Paris.” The Paris show was, in fact, one of her favorites—a night surrounded by friends and new faces alike. “We were only in town for eight hours or something ridiculous, but it was amazing,” she recalls. Speaking to McCarthy, you get the impression that she is more surprised than anyone by her rapid rise to fame. Now an internationally recognized name, she has come a long way from making music alone in her room back in Brisbane. “My parents weren’t musicians, so I don’t really know where [the music gene] came from,” McCarthy explains, adding that both of her brothers are athletes, “but everyone sort of creates in a way.”

Lovato was not the first person to recognize McCarthy’s angelic voice and immense talent—nor will she be the last. Originally discovered by Australian radio station Triple J and its Unearthed competition for emerging artists, JOY. has since risen through the charts at an electrifying pace. After her debut EP ODE landed at number one on the iTunes electronic charts in mid-2015, last year’s track “Smoke Too Much,” off her new EP Six, generated three million streams. McCarthy is still humble as ever, though, which is part of what makes her so magnetic. That and the fact she is so enviably at ease on stage. “I find it really calming,” she reveals. Though the alter ego JOY. actually comes from McCarthy’s middle name, there is the sense that there might be more to it than just this happy coincidence. Certainly, the artist seems to derive much pleasure from playing music—and it is this spirit that shines through most in her work.

Suffice it to say that this young songstress is a star on the rise. With more shows already on her calendar and a recording trip planned for the United States, McCarthy is excited to soak it all up. “I think I’m more used to traveling than being at home,” she says from her current base in Sydney. “Although I do think it would be nice to be in the same place for more than a week.” Fortunately, that kind of musical downtime doesn’t seem quite so likely—at least not if JOY.’s meteoric rise is anything to go by.

Six is out now.