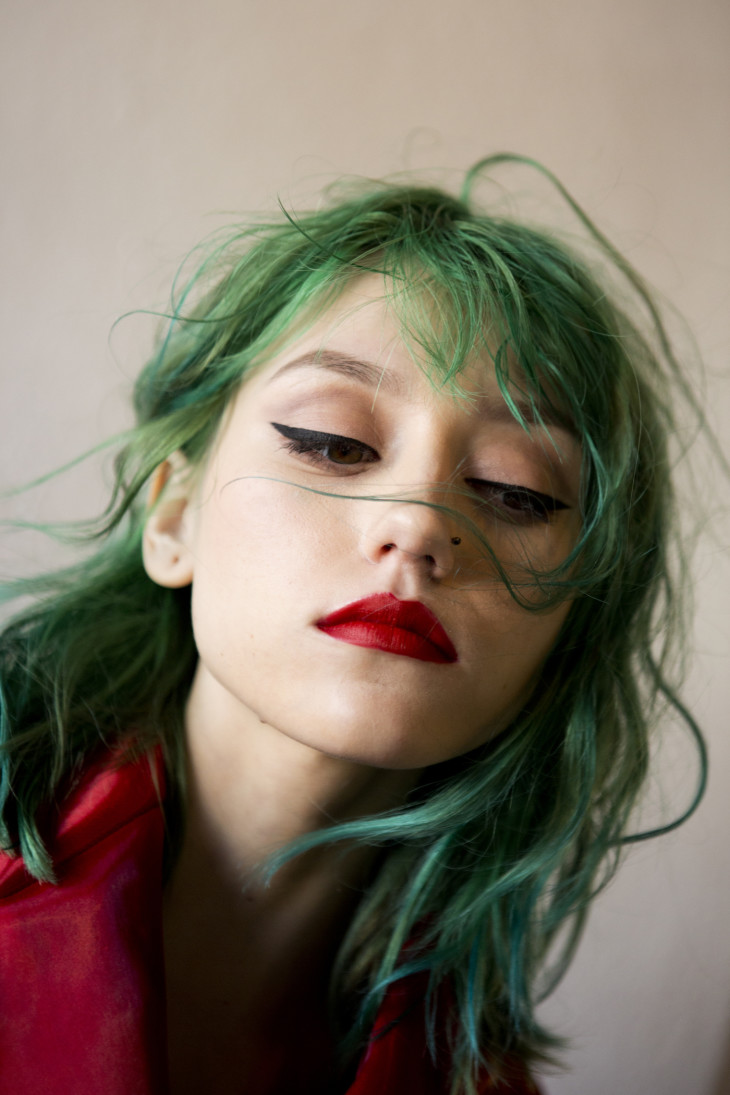 It’s easy to see Kailee Morgue’s creativity with just a glance. Perhaps it’s the green hair or the smattering of tattoos, but her expressive energy can’t be missed. A career in music was a natural choice for this nineteen-year-old, then—she just didn’t realize it would happen quite so quickly. After sharing an unfinished version of her song “Medusa” via Twitter last year, she found herself thrust into the public spotlight when it went viral and the accompanying video has since served as another launch pad for her with almost a million plays on YouTube.

“I remember putting that video up and thinking, Oh god, people might think this is super weird,” the singer (born Kailee Moore) recalls. Fortunately, “Medusa” was a runaway success, yet more proof of the power of digital mediums to unearth the talent of emerging musicians, and ultimately helped to lay the foundations for her recently released EP of the same name. Over four crisp tracks, Moore is both brooding and energetic, with an introspective darkness belying the otherwise upbeat bounce of her songs. With a record contract and her first solo performances now under her belt, it is fair to say that things have changed quite dramatically for Moore over the past year or so. She made the move from Phoenix to Los Angeles and now spends time in the studio each week working on her songs, something that comes quite naturally considering she has been writing since she was eight years old and recorded her first song at eleven. “By the time I graduated high school, I decided to take a year off and really push myself to try and get somewhere with my music,” Moore explains of the decision to put off college in favor of songwriting. It is a path that many parents probably would have been averse to, but one that she says her family supported her through wholeheartedly.

This support system continues to be integral for the introverted artist, too. “At first I was really struggling with [the move to Los Angeles], because I have a big family and I moved here by myself,” Moore says. “It’s a really populated city and is very fast paced [compared to] Phoenix.” After seven months, though, she says that she has carved out a bit more of a routine between time spent in the studio and hanging out with her dog, a Greyhound-Labrador mix that she recently rescued. In many senses, Kailee Morgue’s fast-paced success is disarming, simply because she is so much like any other nineteen-year-old. Perhaps it is this sense of realness that only lends to her appeal. With more than fifty thousand followers on Instagram, Moore says that she is still figuring out the right balance and sometimes feels like she is oversharing. “But at the same time,” she adds, “I never want to use my social media [in a way] that makes my life look super glamorous because that’s not reality. I [would prefer to] show the downs as well.”

Morgue admits that social media can make things both more and less difficult for emerging musicians today. “For me, it has definitely come in handy, because it’s an easier platform to get your music out there and make sure that it’s heard,” she offers. “It is just really accessible. [Then again], it can be hard, because there are so many underrated artists on SoundCloud and YouTube.” Luckily, Moore’s raw talent, coupled with her palpable sense of authenticity, makes her fairly unforgettable. Navigating the social media landscape in an honest way might not always prove an easy feat, but it is something that’s incredibly important, Moore says, adding that she has personally struggled with anxiety and mental illness in the past and is not afraid to discuss her own experiences openly with her audience. “I think people believe that, as an artist, you have to be strong and be a leader for others, but that’s just not me,” she explains. “I am an empathetic person and I don’t think that’s a weakness, so I try to share [that side of me].”

These sorts of realizations have proved vital for the songwriting process too, Moore says. “When I first started writing, it was as a coping mechanism. I was writing my stories down because I didn’t really know how to verbalize things otherwise,” she says. “Lately, it has become less personal, though, and more empathetic. I feel like I am writing other people’s stories now.” By putting herself in the shoes of others, the artist has been able to explore a wider range of themes. At the same time, it also allows her to broaden her musical range—because, as Moore sagely says, “I never want to tie myself down to one sound.”

Medusa is out now.