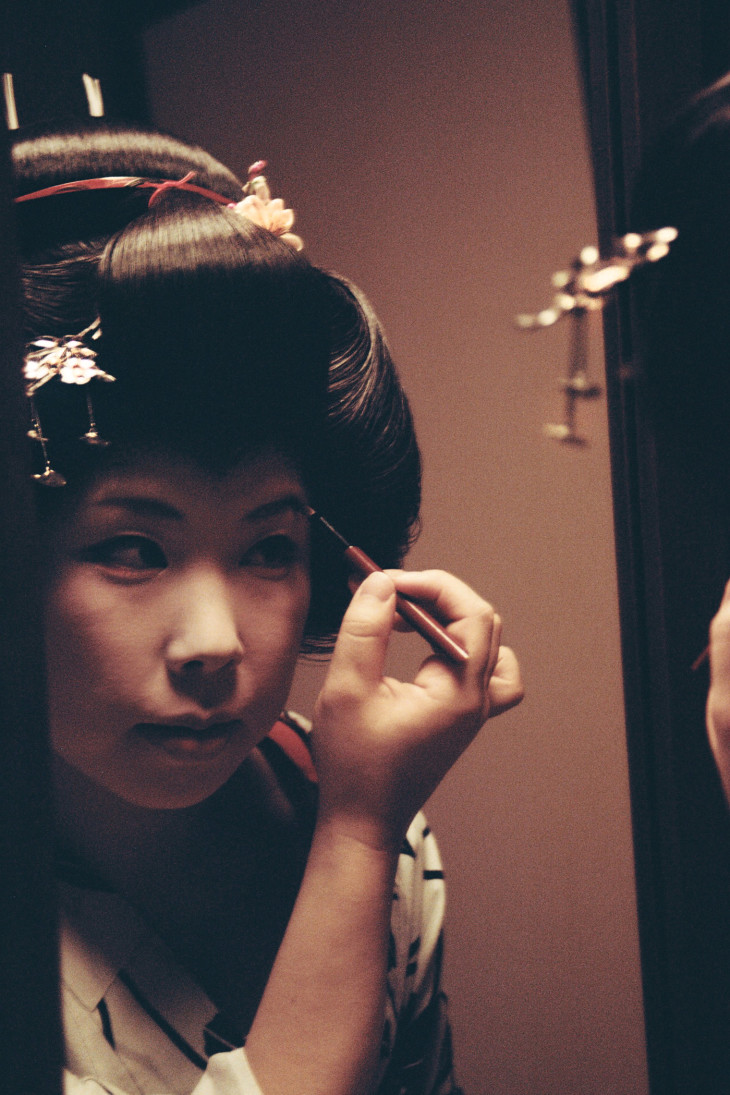 芸者 (geisha)—The two characters, when combined together, mean those who entertain. And that is exactly what geisha are. They sing, dance, and play instruments, and they hang out with you, serving as highly skilled entertainers.

When the tradition began in the Edo period, there were both male and female geisha, but by the Meiji era, being a geisha had become a female-dominated vocation. A geisha, or geiko in Kyoto and Kanazawa, would belong to an okiya, or house—such as the one documented by Marie Zucker in these photographs—which would then send them to an ochaya, or place of entertainment. Essentially, okiya were and are to this day all-female talent agencies. It isn’t easy to become a geisha by any means. Okiya, traditionally female-owned enterprises, train those who wish to become geisha, often starting in their late teens, through a rigorous apprenticeship. During the training, young women learn the geisha’s unique way of speech, etiquette, and entertaining skills while supporting older geisha by taking care of household chores. There’s no salary, but the apprentices are provided with kimono, food, and housing. When she finishes the training period in a year or so, she becomes a junior geisha (called a maiko, hangyoku, or oshaku depending on the region) by sharing a ceremonial cup of sake with a senior geisha whom she calls one-san, a big sister. That is when the okiya starts sending her out to entertain patrons at an ochaya. Eventually, a geisha will graduate from the house and become a freelance geisha.

Contrary to the popular misconception—especially among Westerners— that geisha are prostitutes, what they sell is their entertainment, not their bodies. Those who sell their bodies are called yujo. The way the industry operates is largely unchanged since the Meiji period. Patrons would call an okiya’s black rotary phone to request a geisha’s company, then the okami, the female owner of the house, would assign the women to the designated ochaya. But there are a few things that are different. For one, there are fewer and fewer young women now who wish to go through the difficult process of becoming a geisha, making it a slowly dying tradition. Secondly, they have become one of the major tourist attractions in Kyoto for international visitors, yet the popular misconceptions of them as prostitutes seem to linger, due in part to their hesitance to publicize what actually goes on in the house.

As a Japanese-born woman living in New York, I’ve had mixed feelings about the geisha tradition in the modern age. The idea of women in kimono serving men (and some women) seems antiquated, if not sexist, and it often involves underage drinking. The tradition, and especially the way it is seen abroad, enforces the stereotypes of a male-dominated, misogynistic Japan.

But when I actually came to be in company of geiko in Kyoto, I started to realize the nuances of the tradition. After a brief introduction to their skillful conversational skills, I realized I was surrounded by a group of strong, intelligent, and surprisingly independent women. In the okiya, we were their guests, and everything was run by the women according to their rules. The way they put themselves together is visually fascinating and so is the way they speak. One thing was abundantly clear: These women chose the way of life of geisha. The tradition—as all traditions must be—is kept alive by those who are fully committed.