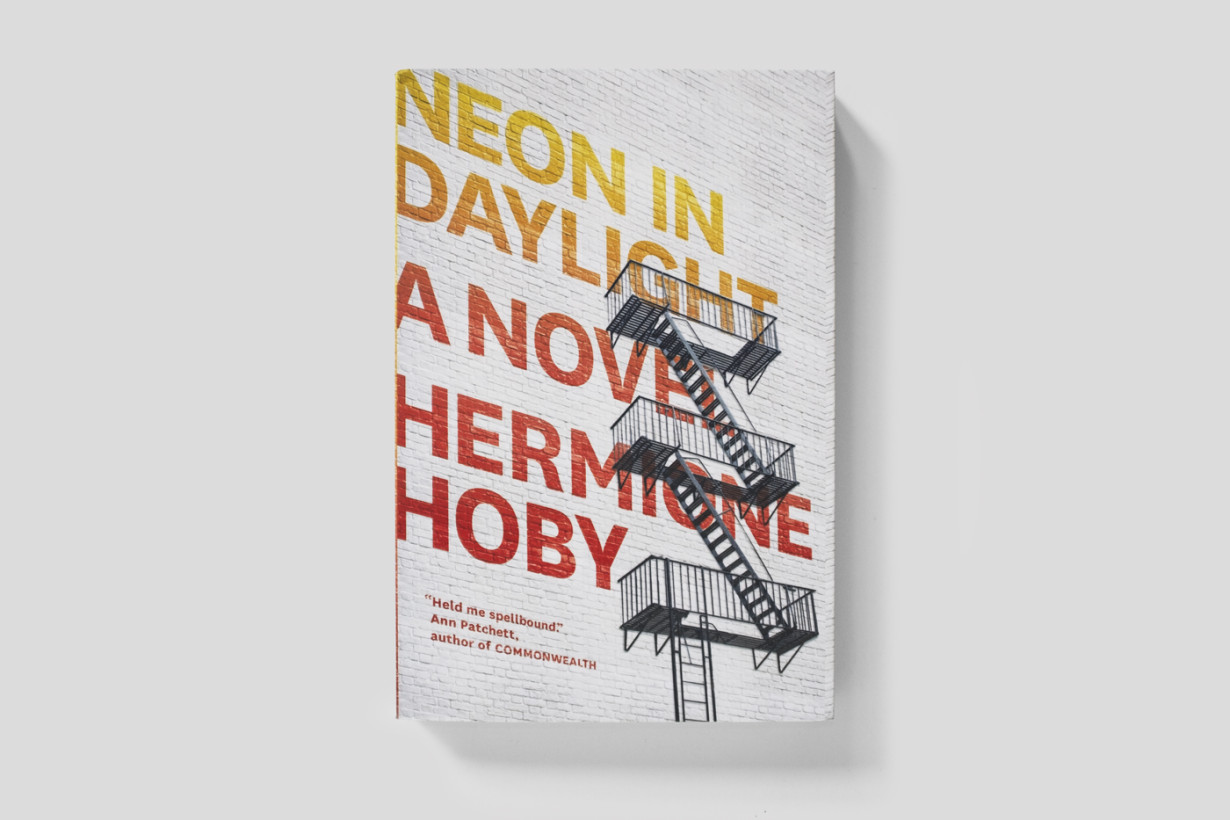 As someone who has interviewed numerous cultural figures for the likes of the Guardian, the New Yorker, and the Sunday Times, it is unusual for début novelist Hermione Hoby to now find herself on the other end of a question-and-answer session. She is quick to parry with her own inquiries, the inevitable tic of the naturally curious, and offers up her full attention, her eyes only straying into the distance as she searches for the right words to furnish her thoughtful and eloquent responses, which help illuminate the wealth of ideas behind Neon in Daylight.

After growing up in London, the young writer moved in 2010 to New York, a place where she says she “immediately felt at home.” The same can’t be said for her novel’s protagonist Kate, also a young Englishwoman, who moves to Manhattan in the blistering summer of 2012 before Hurricane Sandy hits. With no plans other than to cat-sit and escape her life back home, Kate soon finds her stay transformed by Inez, an alluring nineteen-year-old who reveals the city’s layers to her, and her father Bill, a famous author.

As a New York novel, Neon in Daylight presents the city as a character of equal importance to these three individuals, impossible and inspiring, baffling yet beautiful. Coming from England, Hoby was invigorated by its energy and says it was easy to decide where to set her novel. “New York is so much a part of the book in terms of what it offers its characters,” she says. “London didn’t offer any frisson to me—it’s too legible for me almost. One of the reasons I wrote a New York book is that question, just what is it about New York?” That summer in particular was a period of personal reckoning for the young author, as it was the first time she felt a real deep affiliation with the city: “I remember going down to Coney Island, volunteering and helping. I was so emotionally affected by the devastation of Hurricane Sandy. It made me realize that I definitely consider New York home, that I wanted to be a good citizen, a good New Yorker.”

The intensity of the heat underscores the intoxicating nature of the city, which becomes a playground for Kate, Bill, and Inez even as catastrophe looms. New York can induce an extraordinary amount of solipsism, serving as the perfect backdrop to the book’s broader theme of selfhood and how it is constructed while we are in our twenties trying to figure out where we fit in the world. “I think it’s interesting having a moment of great headiness before a natural disaster,” Hoby offers, “how, even in times of extreme climate change, people go on with their lives. No matter how much we are invested in our community as a whole and society as a whole, we are still invariably interested in our own lives.”

Even Bill, who is in his fifties, remains an adolescent in many ways, prone to drinking until he blacks out and still living off the renown of a novel he published decades ago. “I think that when a person experiences their peak moment of success sometimes that’s where they become fixed,” Hoby suggests. His relationship with Kate traces, to an extent, the standard arc of middle-aged man and younger woman, but Inez’s dealings with men, on the other hand, show power dynamics of a different sort. Responding to Craigslist ads to fulfill very specific sexual needs—including, in one case, putting on makeup as in a YouTube tutorial—she appears to take ownership of her sexuality. “There’s a political imperative for women to be overt about their sexuality because there is such a double standard,” says Hoby. “There is a female frankness about desire and sexual wants and needs. [In New York] there tends to be a maximizing mode. Dating is so different and people have different sexual relationships and different degrees of intimacy with various people.” But while Inez’s sexuality initially is meant to prove her toughness, in the end it ultimately reveals her fragility.

Though the book smoothly draws readers into the lives of the three characters, Hoby admits it was not the result of a systematic creative process—one of the first scenes was written in 2011. “I wrote fragments of stuff that couldn’t even be called short stories,” she recalls. “I didn’t admit to myself for ages that I was writing a novel. I was just collecting scenes, impressions, metaphors. It took a very long time for that assemblage to even promise a novel.” For months, in fact, the manuscript was simply a Google document called just that—“novel.” The eventual title hints at brilliance and a certain loucheness and glamour, all of it washed out by the overpowering sun. “At the time, I was reading Frank O’Hara for spiritual sustenance. [The title is] from a poem called ‘A Step Away From Them.’” Juxtaposing the artificial, bright lights with the less poetic and plainer daylight speaks to the novel’s many layers, ranging from the intricacies of human relationships and human behavior to the various faces that New York has to offer. “Neon itself is becoming an artifact of the Seventies and Eighties, which spoke to me of Bill living in a layered New York,” Hoby explains. “In a sense he’s like an extant neon sign, in that his glamour is sort of from a past era, but there is also this idea that New York is a constantly changing, reinventing city and that in turn accommodates personal reinventions that Kate explores tentatively.”

While Hoby may have been seeking spiritual sustenance in her literature, none of her characters seem to be on a similar quest. “I think we probably look for sustenance in other people,” she reasons, “but when we need that so much for ourselves, there’s that paradox that we can’t gain, because the way you get it is giving it. These are three very self-involved characters who are all struggling with what it is to give oneself with trust to someone.”

With Neon in Daylight now published, Hoby is already at work on a second novel, which has been a much easier process than her first. Told in the voice of a young man, it is set in 2017 but told retrospectively from 2064, offering Hoby the opportunity to explore new territory. “I think it’s that thing of difference,” she explains. “There’s a liberating feeling to writing something different. When you’re writing something you don’t know, you can be it fully.”

Neon in Daylight is out now. Pick up your copy here.