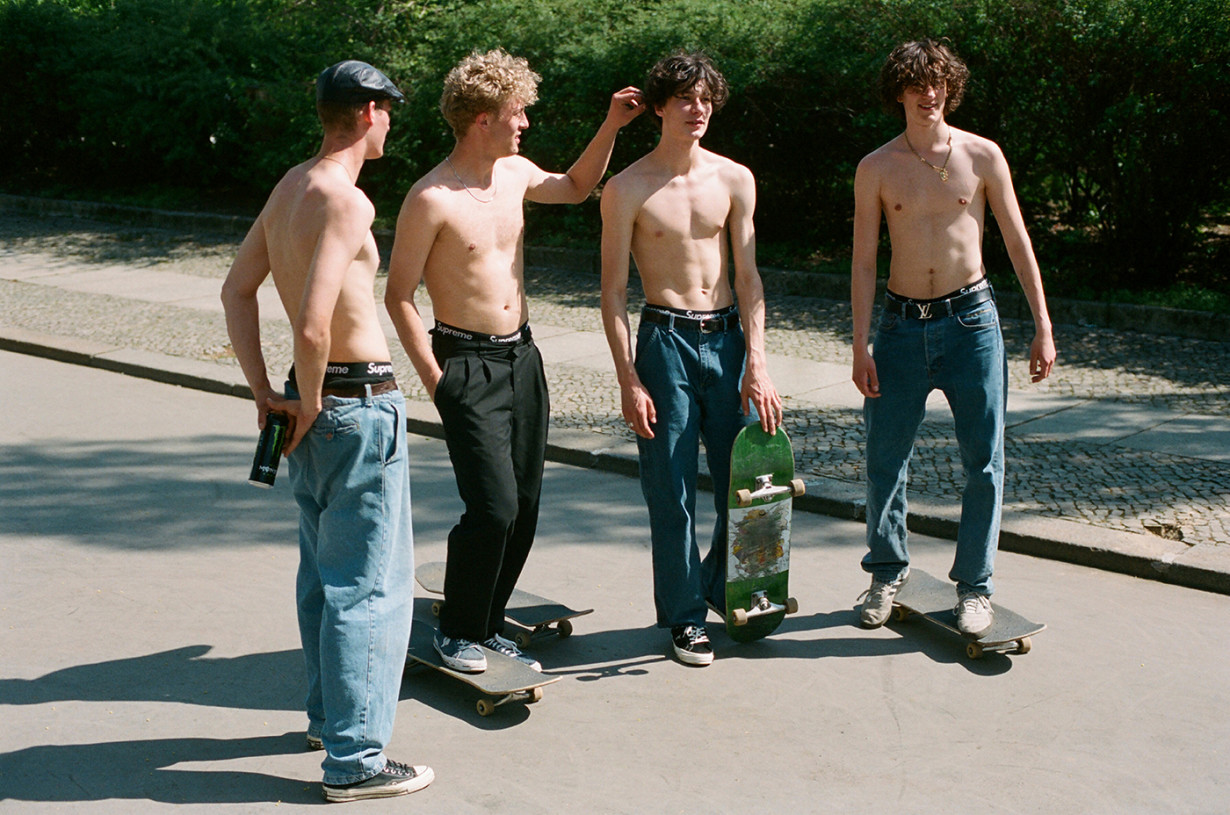 The photographer and director Hans Neumann has “PERÚ” tattooed on his wrist as a way of letting people know where, exactly, he’s from. His name and part of his ancestry are German, but he grew up in Lima and now resides in New York City. About a year ago, he traveled to Europe on a three-leg journey through Germany, Malta, and Mallorca, Spain. His last two stops were to meet and photograph collaborators for his quarterly photo essay, Ensayo, that explores global migration through images and film. The first stop, however, was more personal—Neumann wanted to explore one of his countries of origin, focusing on youth culture.

Through a friend, he heard about a group of skateboarders who, like him, often spend their time making photos and videos, and he was attracted to the idea of “creativity within a community.” So began his project, Berlin, which documents the boys through a short film he describes as a “video poem,” and the still images that feel just as poetic. “I just wanted to connect with the younger generation and experience their group and community,” he says. The images are a mix of action shots, portraits, and behind-the-scenes–style photos of the skaters’ filmmaking process, all of which provide a glimpse into their lives and relationships with one another. Most of Neumann’s subjects are still in school, although some work as professional models, one is a photographer and has an apparel brand called Champagne Towers, and another is a filmmaker. But it’s skateboarding that brings them together. “For now, I think skating is their hobby but also their culture, the place they come from to create,” says Neumann. He spent time with them, eating pizza and drinking beer, and asked them their thoughts on immigration and the future. “I like to see the open-mindedness of the newer generations,” he adds. Neumann mostly took on the role of observer for this project and he isn’t a skater himself—he tried when he was younger: “I smashed my face a couple times, so I quit,” he laughs—but his images still convey a sense of familiarity with the group. His style of shooting is both candid and sympathetic, warm and open-minded, with a healthy sense of humor, and his perspective goes deeper than that of a photographer documenting a subject—he’s at once an outsider and ancestrally linked. “It’s a personal project,” he says. “It was just me connecting with that part of my background.”

Neumann’s first ambition was a law degree, which he received from the University of Lima, while simultaneously learning about photography and film on the side. Later, seeking more creative fulfillment, he moved to New York City, where he studied at the International Center of Photography. After a few years of assisting other photographers, he began taking on his own clients, doing advertising and editorial shoots for companies like Vogue, Ralph Lauren, and Totokaelo.

All the while, he’s continued to pursue personal work, like publishing issues of Ensayo, and in 2016 he published his first monograph, Nuevo New York, which features portraits and interviews with notable Latin Americans who have made New York City their home. More recently, he wrote and directed a series of short films, titled Four Love Theories, each a meditation on love with a conversational tone in the spirit of Sixties filmmaker Éric Rohmer. Reflecting on Berlin, he says it could be the start of a longer process of documenting the young men as they grow up. “I just want to keep exploring my background,” he says.