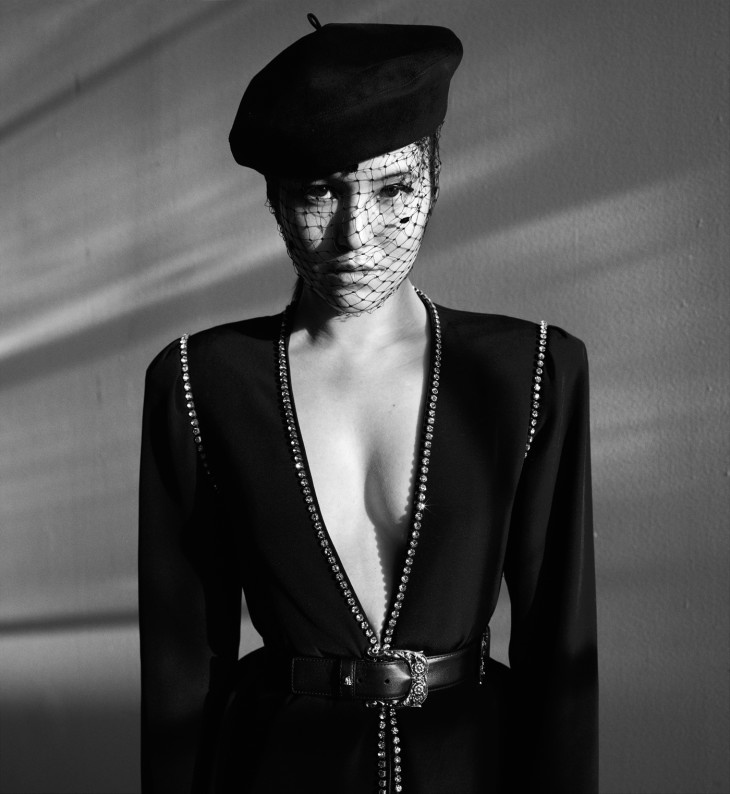 Jacket by Gucci. Hat by Eric Javits. Belt by Versace.

After the stroke of midnight, you can usually find the author Alexandra Kleeman at her desk in Staten Island watching the traffic pass by on New York Bay while she works. “I see cruise ships and big cargo ships going by all the time,” she says. “It keeps me company.” Late, long, and solitary hours are a necessary part of any writer’s life, but living in New York, Kleeman says, affords the opportunity for escape. “It’s the only place that you can be a writer and not be lonely,” she explains. “All the time you spend holed up in your apartment at your desk is counterbalanced by this amazing, thriving community.”

Born in California and raised in Colorado, Kleeman moved to New York in 2010 to pursue an MFA at Columbia and soon after had her first short story published in The Paris Review. Since graduating, she has released a novel, the unsettling You Too Can Have a Body Like Mine, and a book of short fiction, Intimations—which takes its title from a story originally published in The Last Magazine. Her work, which often focuses on the body and its attendant anxieties and discomforts, can be hallucinatory and dreamlike or rigorously scientific, perhaps a holdover from her earlier studies in genetics. “I worked in a genetics lab, I worked in a pharmaceutical lab, I worked in a cognitive science lab, but I was always worried that I could never stick to one thing for the rest of my life,” she recalls. “Writing is like choosing all of the things because you get to dip into each one to write a story.”

At one point, Kleeman, now thirty-one, considered becoming an academic and exploring fiction on the side, before realizing the dissonance between the structure necessary to think critically and the freedom needed to write imaginatively might be too distracting. She chose to focus on fiction. “Even though it’s uncertain, it feels like playing a video game,” she explains. “Something can happen every day and you get to make your own challenges for yourself and then try to execute them.”

Now at work on a “mid-apocalyptic, science-fictiony” novel about the looming water crisis in Los Angeles, Kleeman also teaches full-time at her alma mater, activating yet another region of her versatile mind. “When you’re choosing what to read by yourself, you get to select everything according to your own tastes,” she says, “but when you’re teaching, you have to really engage with other people’s work. It’s challenging and you learn a lot about your own preferences. I think individual preferences are something you overcome when you’re making art. There might be something in that thing you don’t like that is useful to you.”