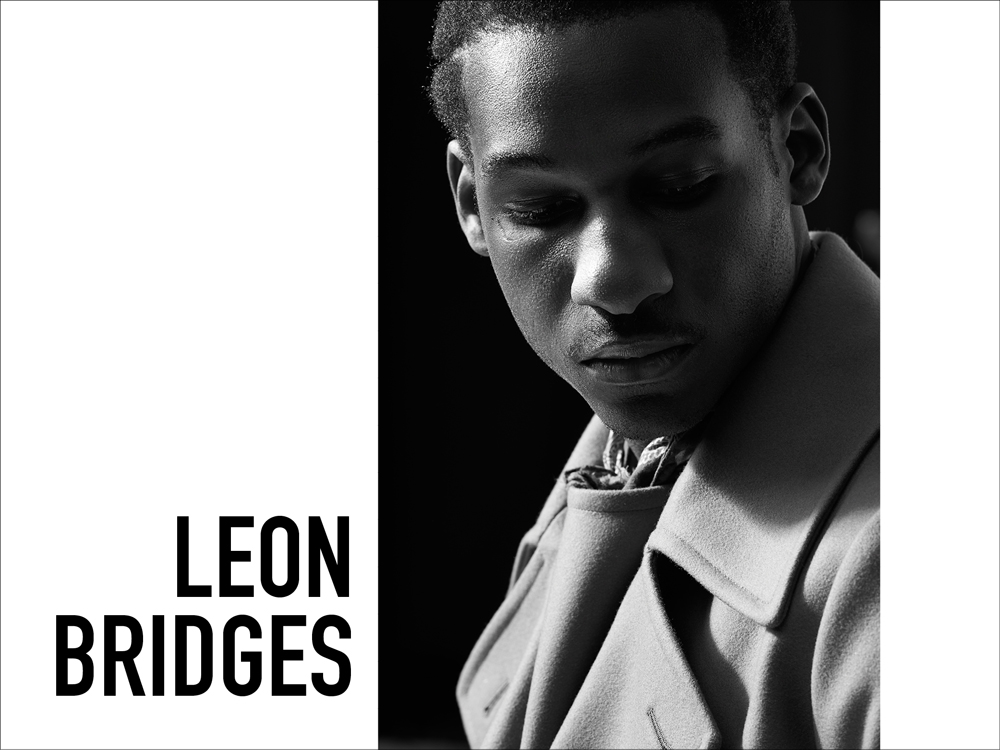 Nostalgia is forgetful, remembering only the best of times. It weaves those memories together into smooth narratives, overlooking those that don’t fit, recalling hardships only to tell tales of victory. These stories, written in hindsight, with their clear beginnings and endings, their heroes and villains, make up our cultural history. They’re the stories we tell to inspire ourselves and each other.

Leon Bridges knows the power of nostalgia. With his warm doo-wop sound, high-waisted trousers, and soulful, rich voice, he invites us to return to the fabled America of the late Fifties and early Sixties, which, despite the great cultural shifts that were underway, we remember for its innocence and sweeping postwar optimism. On his début album Coming Home, which will be released next week, he sings earnestly of love and hope and faith in the American South, songs inspired largely by the experiences of his own family. But how did a shy, twenty-five-year-old busboy from Texas become, as the New York Times so aptly put it, the “second coming of Sam Cooke”?

Over the course of Bridges’ relatively short music career—he picked up his first guitar only four years ago—everything fell neatly into place. A chance meeting with Austin Jenkins, the lead guitarist of the psych-rock band White Denim, was a key moment. Bridges was out drinking on the patio of the Boiled Owl Tavern in his native Fort Worth when Jenkins’ girlfriend noticed him—or, more precisely, his high-waisted vintage Wranglers—and insisted he meet her boyfriend. They would meet again a month later at the Magnolia Motor Lounge, where Bridges was playing a solo acoustic gig, as he occasionally did after shifts bussing tables and washing dishes. His soulful, old-school R&B so captivated Jenkins that it wasn’t long before the two were recording Bridges’ first album, backed by some of the best session musicians in Texas. But before the open mics, the solo gigs, and the vintage clothes, even before he discovered soul, Bridges was a quiet kid growing up in a religious home with his single mother and two siblings in Crowley, a sleepy suburb of Fort Worth. It wasn’t a particularly musical household, with the exception of some gospel music and the occasional Anita Baker record. Back home for a few days after a four-city tour in Europe, Bridges recounts his early experiences in a phone interview. He pauses thoughtfully before speaking, his voice gentle with a slight Southern drawl. “In my family, there are no musicians in the house,” he says. “I had always liked to sing. I never thought I was good at it, but I really kind of found my voice in college.”

Like so many of us at the time, he was listening to modern R&B groups such as 112, One Chance, and Dru Hill (“People don’t even know, they don’t even know!”). Inspired by the iconic moves of Ginuwine and Usher, he was pursuing a degree in dance at Tarrant County Community College when music opened its doors to him. All clothing by Marc Jacobs. Socks by Calvin Klein. A series of impromptu jam sessions had formed around a student that brought his keyboard to school every day, which Bridges eventually took part in. “One time, it was my turn to sing something, and I sang, and someone said, ‘Hey, you sound pretty good!’” he says. “And so, every day we would just improv and make up songs, and eventually I got tired of depending on other people to be creative, and I went out and bought my own guitar, and I had my own desire to write songs.”

It was this creative impulse that propelled him through the difficulties of his early relationship with music. “I could go look at a book, or go online, but I still didn’t understand: how do you make a song?” He stuck with it, dabbling at first in gospel and neo-soul, but it wasn’t until he wrote the flowing “Lisa Sawyer” that he settled on his soulful sound and, at a friend’s suggestion, began listening to Sam Cooke and Motown artists in earnest. He hadn’t shared much of his music with his family, but when he first sang “Lisa Sawyer” for his mother—it is, after all, written about her—she burst into tears. Perhaps as integral to his career as his music is his personal look, which also began to take shape around this time. Shot almost exclusively in sharp black and white, his official photographs show him wearing the short-sleeved collared shirts, tailored suits, and dress shoes so popular in the early Sixties. His introduction to the style came by way of some old clothes given to him by a family friend. Asked whether he always looks so sharp, he laughs, “Oh, I mean, there’s no turning it off. Like, when I go to the laundromat, it’s the same way. I don’t believe in sweats and sneakers and graphic t-shirts to go anywhere. That is a no-no in my book.”

His unfaltering faithfulness to history extends to every aspect of his career. Coming Home was recorded live using exclusively vintage equipment, giving his tracks the warm crackle of old vinyl. His music videos have a similar throwback feel, filmed in monochrome and often featuring only a hip-swinging Bridges with his band and backup vocalists. Even his hairstyle, a meticulously groomed wedge, fits the part. Where his consistency has its greatest impact, however, is in the songs themselves. In addition to being a naturally gifted musician, Bridges is a tremendously talented songwriter who’s adopted the sincerity of early R&B and the openness of gospel in his writing. “Baby, baby, baby,” he croons on the album’s catchy title track, “I’m coming home to your tender sweet loving.” In the groovy, horn-filled “Twistin’ and Groovin’,” he sings, “She’s got a golden smile, I know that she’s the one for me in the room” (written from the perspective of Bridges’ grandfather, the ‘she’ in question is his future wife), and in the stripped-down, moving “River,” he seeks redemption in the waters of the Jordan. What’s clear throughout the album is that Bridges doesn’t try to change the early R&B sound—he simply aims to recreate it. Somehow, in doing so, he’s managed to craft a record that, rather than sounding dated, instead feels timeless.

It takes no small amount of courage to release an album so unflinchingly earnest to a generation raised on a steady diet of irony and cynicism. And yet Bridges has achieved widespread success during his fledgling career, stunning crowds at SXSW, selling out shows within minutes in New York and Los Angeles, and even providing the soundtrack to an iPhone commercial. He counts Jessie Ware, who has performed with him onstage, as one of his biggest fans. There’s something especially captivating about early-Sixties nostalgia, and he knows exactly what it is. All clothing by Marc Jacobs.

“It’s simple,” he says. “That’s what I loved about the music back then, the innocence. Nobody writes that kind of stuff anymore.” He continues, “It’s a time that everybody really loves and, for the most part, wasn’t able to experience. The fact that they see a young man trying to bring it back, you know, people are into it. To see somebody that’s dedicated to it.”

Don’t get him wrong, though—while he makes a living recreating the past, he lives firmly in the present, admitting to being a big fan of Young Thug and Kendrick Lamar and incorporating pieces by Acne and Marc Jacobs into his wardrobe. “I figure it’d be kind of weird if I put myself into this kind of ‘soul bubble’,” he says. “I can’t deny my roots and what makes me feel good and sounds good.”

Bridges’ great success is convincing his listeners to travel back with him in time to an age without notifications and dating apps, when enduring romances began in a dance hall, and a love song was simply a love song.

Coming Home is out June 23 from Columbia Records. Jacket and turtleneck by Patrik Ervell. Shirt by Louis Vuitton.