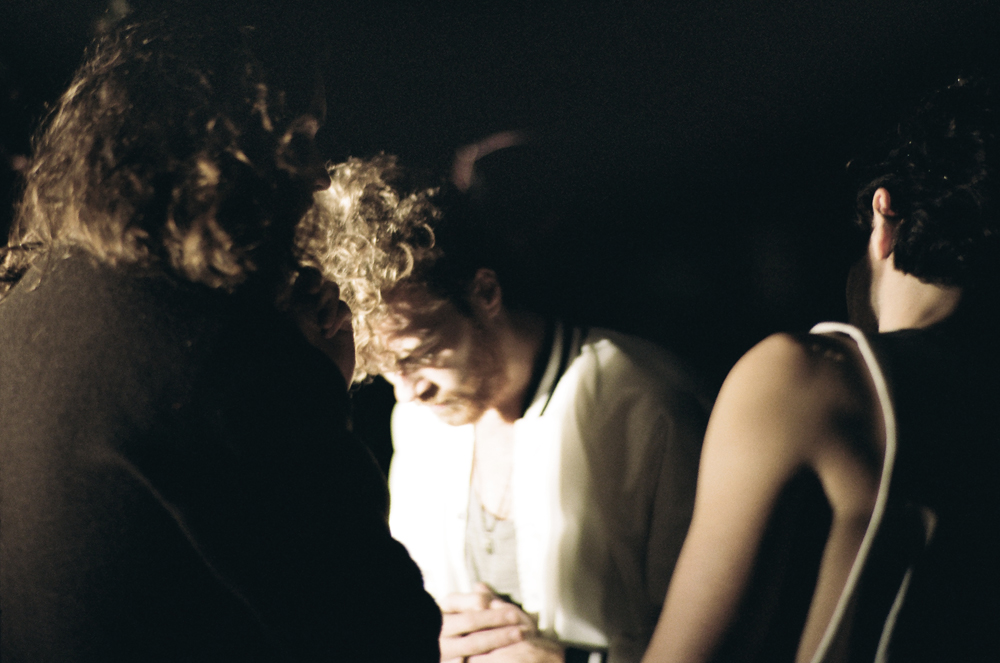 December on the Lower East Side in New York, it’s raining when it ought to be snowing, and the boys of Mothxr—the New York-by-way-of-Los Angeles band fronted by Penn Badgley and completed by Jimmy Giannopoulos, Simon Oscroft, Lakis Pavlou, and Darren Will—are dressed like it’s spring come early: tank top, light denim, satin jacket, fitted cap, and leather boots. The band, brand new and with just four officially released songs to their name, is right at the end of a three-week residency at Pianos, two doors down from the Ludlow Hotel, where they’re hanging out.

It becomes clear, quickly, why Oscroft, guitarist, says it can be hard to get all four of them in the same room at the same time. The dynamic is brotherly, aggressively independent, and passionately supportive; they speak over each other, crack wise, but also respect the many musical projects and side bands that exist outside the world of Mothxr.

“We’re not twenty years old going like, ‘This is a family,’” Giannopoulos, bassist, producer, and multi-instrumentalist, says, propped up in a chair. “We’re just friends making our shit. I think everyone’s got different strengths they can go and flex. It’s different projects, it’s ways of expressing yourself.”

“Yeah, that’s how it started too,” Badgley, singer, adds. “It was never the intent to be like, ‘Let’s be in a band together.’ It was like, ‘Let’s work on something for eight days, initially, and see how it goes.’ It was a matter of time.”

“It was a matter of time, yeah,” Oscroft chimes in.

Mothxr formed last summer over, literally, eight days. Badgley, best known for his television and film work, always considered himself a musician at heart, if not in practice. A music project was in the ether but he, Giannopoulos, and the band needed a catalyst to kickstart the process. “Jimmy and I talked about getting out, like, ‘Fuck this winter, maybe let’s get three months out in Los Angeles,’” Badgley says. “Then it was like, ‘Maybe we’ll go out there for a month and a half,’ then it was four weeks. I remember a few days later I was like, ‘So, yo, we’ve got eight days. Write a song a day? Ok cool.’ Over half the record came out of those eight days.”

“Including ‘Easy,’ which was the first song we released,” Oscroft adds. “‘Easy’ was written and recorded on the third day. We never thought about the order. We just were like, ‘Ok cool, song’s done. Onto the next one.’”

From that eight-day session came a trip to Chicago where the band recorded much of the music they now play live. The reaction to the songs was immediately, effusively positive, even before Badgley’s Gossip Girl fans knew their man was behind the mic. “So far the most positive response we got was before anybody knew anything about who was in the band,” Badgley says, still acknowl- edging that he can never truly sever himself from what he—or anyone—has done before. “When ‘Easy’ came out, that probably set the tone. We’ve been received pretty honestly, pretty openly, and I think, if anything, I can take pride in that because it’s a reflection of the way we did it, what we put into it. There’s no fucking bells and whistles, we’re not trying to be extra stylish, we’re not trying to be anything. We just did it.”

Mothxr, on the merit of its music, has been named as a must- listen for 2015, and “Easy” has been featured alongside new tracks by Alicia Keys, One Direction, and You+Me by Pitchfork, Wonderland, Nylon, and more. Like any good indie band, Mothxr’s vibe is easier to characterize than its sound. The songs universally evoke sadness and seduction; it’s night music for late drives through the city. It’s also music to have sex to.

The component parts usually include a net of drum-machine pop, funk guitar, saw synths, and Badgley’s sensual, whisper-soft drawl, but the feeling of the song, the groove, always comes first. “The beat and vibe come first, and then we sit down and talk about it,” Oscroft says. “One night we went out partying and we heard a couple songs on the dance floor and we were like, ‘Fuck, this vibe, we should do this vibe tomorrow,’ and we woke up being on the same page.”

“And then it totally changes, like five hours later,” Giannopoulos says.

“It was an upbeat song and it turned into a ballad, our slowest song,” Oscroft says.

“You gotta start somewhere and then you evolve together,” Giannopoulos adds.

The band is passionate: about their music, their friendship, and their future as musicians. It could come across as posturing if they weren’t so talented, their music so infectious, and their future so promising. They hold up tastes that bounce from Bowie to Rae Sremmurd. “I think more than ever the authenticity of the artist—the artist’s true and honest expression that ‘This is the music I want to make’—that is the most powerful thing that’s happening, and it’s finally being realized by mainstream audiences,” Oscroft says. “Take Frank Ocean and James Blake, that was them being like, ‘I don’t give a fuck,’ and doing what they want.”

“As long as you’re doing it in your own way and it’s kind of cool and the song is there, who gives a shit?” Giannopoulos says. But they all know that they do give a shit, something they later acknowledge. Music has atomized to the point where it doesn’t matter if everyone likes your music because, if you really put in the work and the songs really are there, then someone will like your music. Anyone can find their audience. Just, as Giannopoulos would say, “make shit you like.” That’s been Mothxr’s touchstone for success.

“We just get in a room and we just make a bunch of shit and we don’t know how it sounds,” Giannopoulos says, leaning forward in his chair. Badgley, Oscroft, and Wills nod along, a little tired from the tightening vice of success but also, presumably, definitely, a little excited about getting back to work in the studio and about the show they’ll be playing in three hours. “We have no idea, and that’s so fun. It takes you back to your purest thing. You’re just like, ‘Try this,’ ‘Oh, that’s fucking cool,’ ‘Let’s fuck with that,’ and you come up with something, you mix it, you play it for your friends, or just do whatever. That’s how it works.”

And it has been working, even as the process, the band, and the future feel mercurial, exciting, and distant and ever-approaching, just like their music. Badgley says: “I can really appreciate how you can’t control it. It’s this slippery fish, it’s like vapor in the air and you catch it, for a moment.”

Shot on location at the Ludlow Hotel, New York. 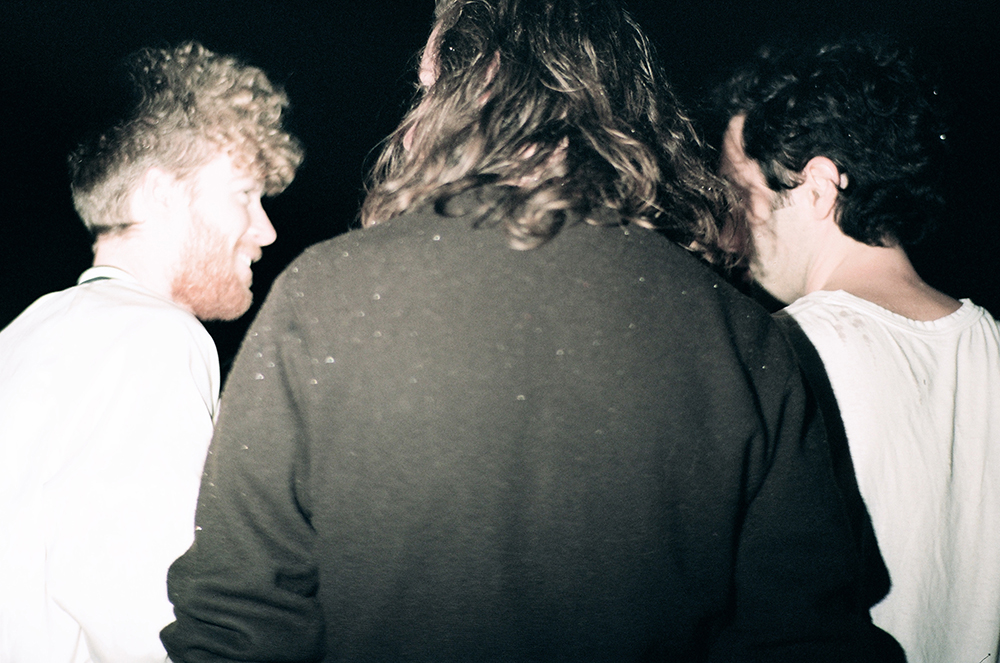