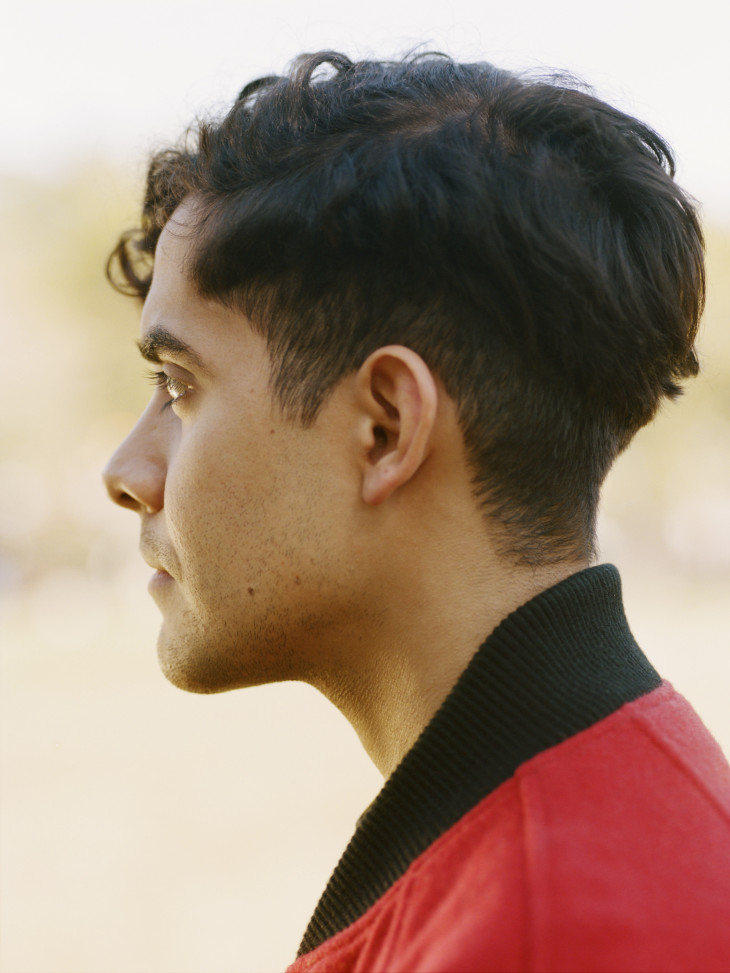 “I’m all alone, just you and me,” sings Alan Palomo in his best sex-hotline falsetto over the phone from his tour bus en route to Minneapolis a few weeks ago. Palomo, or Neon Indian, as he is better known to his fans, is mimicking the commercials he would see on television on Saturday nights growing up. “I remember my brother and I calling a few of them, but we didn’t have a credit card so we never got past the phone operator and it always started with a ‘Hey there, sexy.'” Coincidentally, that is the same greeting you hear when you call 1-512-643-VEGA. “For a record that’s sleazy, it just made the perfect sense to be like, yeah, of course you’re gonna call a phone-sex line to get information about the International Night School,” he says.

The record Palomo is referencing is VEGA INTL. Night School, the first Neon Indian studio album in four years, out now via Mom + Pop/Transgressive. A decent step away from the first two Neon Indian records (the ones that got him begrudgingly labelled as a pillar of the chillwave pseudo-genre), VEGA INTL. is a sonic expression for the visual journey that takes place in Palomo’s mind; it’s both his guidebook and soundtrack to New York’s nighttime. A direct result of watching B-movies, like Street Trash and Bronx Warriors, and less familiar Scorsese films, including After Hours and The King of Comedy, VEGA INTL. is a studied album that doesn’t try to hide its influences, finding its groove somewhere between psychedelic rock, Italo-disco, and synthpop, backed by reggae and Balearic beats; it’s Hall & Oates and the Flaming Lips meets Prince in Ibiza, all reimagined in downtown New York.

On the Wednesday before VEGA INTL. dropped last month, Palomo took the stage for a sold-out CMJ show at Webster Hall—the first live Neon Indian show in New York show since May 2012, a fact he told the crowd in joyous realization. Dressed in all white and bringing disco-era energy, Palomo unfurled his jiving dance moves as he opened with “Dear Skorpio Magazine,” a bopping dedication to a defunct Seventies Italian porn glossy that is filled with sugary synth saxophone breakdowns coupled with psychedelic guitar riffs played by the band. Palomo’s ensemble, along with drummer Jason Faries, keyboardist Drew Erickson, and guitar and synth player Max Townsley, also features his brother, Jorge Palomo, a longtime bassist who played an integral role in the album, co-writing several of the songs with Alan, and playing bass on a handful of the recorded tracks. Alan even tagged along when his brother took a six-month contract playing bass on a Carnival Cruise ship (not as glamorous as it sounds), so as not to lose the momentum on the songs they were working on together. In the years between VEGA INTL. and 2011’s Era Extraña, Palomo returned to DJing, which he first did while attending school (for film) in Denton, Texas. “I missed that time in my life when I had to obsessively be collecting music,” says Palomo. “When I came back to being able to do that, I realized how valuable it was to be locationally hunting for new influences.” VEGA INTL.’s groovy reggae-influenced tracks like “Annie” and “61 Cygni Ave” are a direct result of Palomo discovering legendary German reggae disco band Supermax, while diving deep into the sounds of the solo catalog of synthpop mavens Yellow Magic Orchestra laid a stamp on funkier tracks like “Street Level” and the space-age-disco-vibed “Smut!”.

“Back then, it was a lot of French house,” says Palomo, referring to what he used to DJ before he even started his electro-synth project VEGA, a solo act predating Neon Indian. “And beyond that, I was collecting a lot of Eighties stuff—a lot of Italo-disco, a lot of early house,” all of which also pop up throughout VEGA INTL., to add to its narrative. In the sparse lyrics of “Techno Clique,” a pure four-on-the-floor house track, Palomo sings, “There won’t be heartbreak in the room tonight/No sentiments to speak of/No names to remember/Just you and I.” Here, two-thirds into the album, two-thirds into Palomo’s night, you are on a dark, seductive dance floor, and here, amid strangers, nothing matters too much. “Just you and I,” Palomo repeats. “I ultimately set up to write a VEGA record,” says Palomo of his latest release. “I didn’t like that the production components from Neon Indian were spilling into the VEGA demos and vice versa, and I realized it’s like splitting hairs. It didn’t warrant separate projects anymore.”

From the album and singles’ artworks he conceptualized with artist Robert Beatty and the “Slumlord Rising” video he co-directed with Tim Nackashi to the comical parody of a Corey Haim and Corey Feldman commercial he released to promote the hotline, all of the latest project’s visual components also originated from the B-movies Palomo watched, the records he collected, the cultural artifacts he related to. “It was meant to play with contexts and be this reference within a reference,” says Palomo, describing the album art as anachronistic, “where it’s not quite old and it’s not quite new.” Palomo’s music is an æsthetic statement, something the auteur makes clear when describing his writing process: “It almost starts at a music video, or it starts with a film scene and then the song gets aggregated on top of it.” And with the “Slumlord” video, which takes places in a seedy disco where things go violently wrong, that was exactly the case. “The video was the opportunity to finally be like, ‘Well, this is what it was always meant to be in my head.’ It was never just about the music, it’s always about where the music was taking place.”

The final visual component of VEGA INTL. comes through in the live show, which the band debuted in its full manifestation at Webster Hall, and which is now taking Palomo across the United States before he heads to Asia and Australia later this year. “It was cool to have this symbiotic thing,” he says. Going beyond “Winamp-style visualizer” videos that were part of the earliest permutations of the live show, the colorful live analog videos created with five Kinect motion sensors go hand-in-hand with the live show’s funky, psychedelic mood, projecting helixes and sound waves altered by the band’s movements and blending perfectly with songs like the glittering “The Glitzy Hive.” “The one component that we never really incorporated [into the visuals before] was the actual performance component,” says Palomo, “what we looked like as a band performing on stage.”

2009’s Psychic Chasms, Palomo’s debut as Neon Indian, was a pure reaction to the times. “When I wrote the first record, it was almost something accidental, just a little creative exercise that lasted a month and it just somehow materialized into this thing,” he says. With VEGA INTL., he knew what kind of record he wanted to make, even though it required “a lot of trial and error” to get right. And as he takes us to his night school more than half a decade later, perhaps the most important lesson Palomo himself has learned is: “Let’s only make music when it’s fun.”