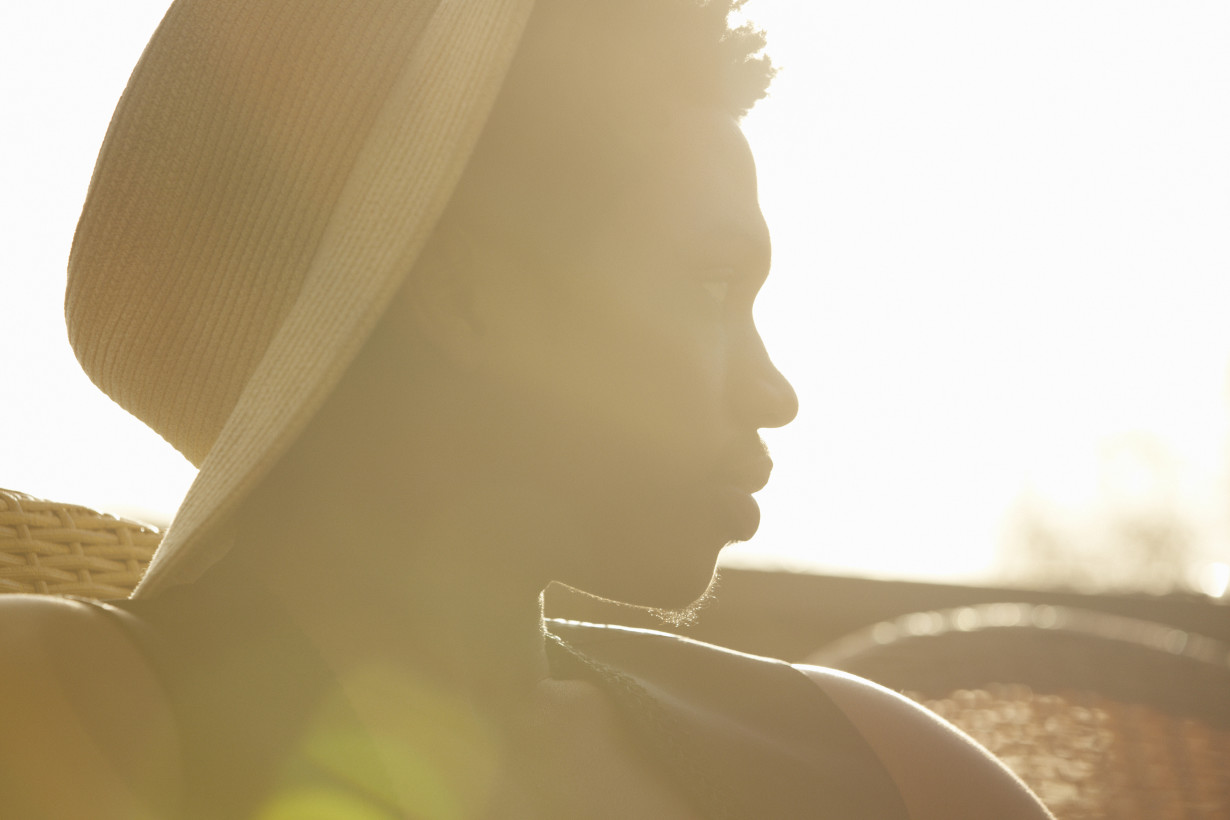 Vest by Dolce & Gabbana. Hat, worn throughout, Raury’s own.

When I walk into Rossy’s Bakery, the tiny Dominican place in Alphabet City, eighteen-year-old rapper Raury Tullis is holed up in a side booth, signature wide-brimmed hat and customized leather jacket in tow, making his way through a late 3 P.M. lunch of “way-too-sweet cornbread” and a plate of roast chicken. The native of Atlanta’s suburbs has just flown in from London, where he played with SBTRKT, and before that, at a showcase in Rennes, France.

“I’ve been working my life away for two weeks straight, then taking like two days to rest like this and sleep till twelve. You feel amazing,” admits the artist. “I was in France and London—since when? December 1st? I got back here a couple days ago.”

He wants to talk about the shoes he just bought in London’s Soho (“I just wish I brought these boots to show you! They come up to here [pointing to his knees] and have buckles like dictator boots. I’m being very careful, because they’re a little risky, but it’ll be going up soon—my death boots.”), his night at the Chinatown arcade (“It was the craziest thing. The guys—they go there every day and they’re like gods at everything.”), and he wants to hear about you. It’s easy to forget that the teen is, in many critics’ estimations, our next great singer-songwriter-rapper prodigy. Jacket and vest by Dolce & Gabbana. Jeans by J Brand.

The buzz all started last spring when Raury self-released “God’s Whisper,” a floating, boho campfire track that combines diverse, seemingly disparate influences (Frank Ocean, Bon Iver, Phil Collins) to grandiose effect. It’s a genre-defying, tender-hearted ode (or perhaps gospel hymn is more accurate?) to living on the outside, filled with uplifting lyrics about self-trust and perseverance. “[That song] is about when I was in school, hating it,” explains Raury. “People didn’t believe in me musically or anything like that but I did.” The track was the first of several that made up Indigo Child—his debut album—and upon its release, last September, it caught the attention of OutKast (Raury went on to perform on their tour), SBTRKT (the two laid down several tracks together), and none other than Kanye West, who met with Raury for twelve hours, listened to his stuff, and played him his own unreleased material over the summer. Despite speculation that Raury would sign to West’s G.O.O.D. Music, he went with Columbia, and then soon after he was contacted by Lorde about collaborating on a song for last fall’s Hunger Games soundtrack.

The album is surprisingly, refreshingly intimate in tone. “I dared to tell my story,” says Raury. “Literally, [Indigo Child] was written from a place of uprising, rebellion, and anger. Making music is how I cope, and I wanted to just show, to just tell my story.” This directness comes through on record and is, perhaps more than Raury’s rare ability to blend far-reaching genres (indie pop, Atlanta hip hop, stoner rap, alt-folk), the reason why he is so resonant to the likes of West—and why kids in Atlanta and beyond are connecting with his high-minded, Internet-era pop. Raury’s music is unusual—part André 3000, part Kid Cudi, a little Mumford & Sons—really unlike anything we’ve heard. But more than just new in sound, it’s lyrically sincere. One recent example: in January, Raury released “Fly,” a searing acoustic track dedicated to Michael Brown and written in the wake of the Ferguson ruling. It’s been an exciting few months, to say the least, but for Raury, ‘success’ is more about a personal satisfaction than it is about attracting industry heat. “Growing up in Atlanta, I had a different experience to everyone else simply because I just had a different name. My real name was Raury. It’s crazy how something that little has a real effect on your life. But it really does,” he says. He wrote his first song at age three, started rapping at eight, and taught himself guitar by watching YouTube videos at eleven. “I was always self-conscious of how I was different from everyone else,” explains Raury, who has wanted to make music from the minute he saw Michael Jackson’s “Thriller” video at the age of “like three” at a family gathering. Indigo Child, with all its raw, unguarded introspection, is his way of dealing with that, and about “how things are becoming different because of kids like me and you and everyone else that was born in the Internet age. It’s like a whole new echelon of mankind.”

The goal for 2015? “I want to inspire the kids in my generation with my music to become better versions of themselves. I just want to inspire them to really chase their dreams,” says the artist, who grew up going to cookouts and skate rinks with two older siblings (“my sister sells shoes, and my brother does special operations in Afghanistan”) and his mom, who worked at a local post office. “Like, I’m no different from anybody. I grew up in public school. I lived with my mom. My parents were divorced. If I can do it, you can do it. That’s pretty much what I wanted to say.” Oh, and also, “Are you good at Super Smash Brothers? We might have to get your info. We might have a little shindig tonight.”