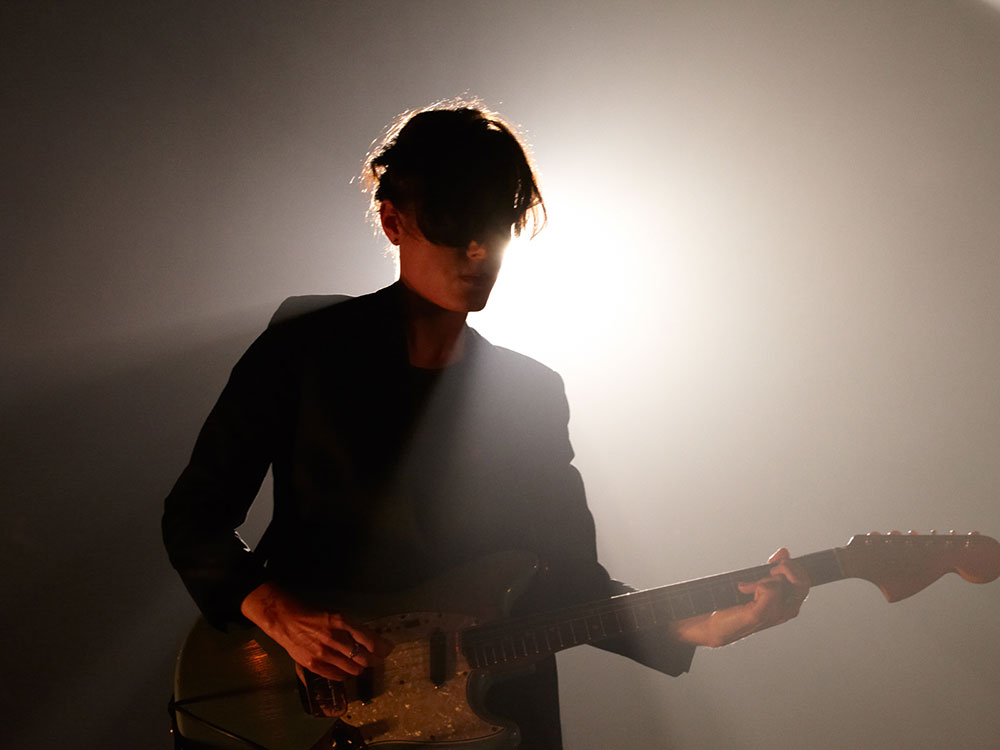 “I need something new, in my ears,” emphatically declares Jehnny Beth, introducing Gemma Thompson’s raucous reverb that builds over Fay Milton’s thundering tom-tom beat, all three supported by Ayşe Hassan’s bellowing bass. Just over a year ago, Beth chanted this same phrase at several live Savages shows, until her bandmates began answering her, improvising what would become “I Need Something New” right there on stage. The track is now one of the songs on Savages’s sophomore album Adore Life.

Controlled, melodic love songs—not words you’d expect to describe anything put out by the historically exasperated post-punk group, but Adore Life is composed of exactly that. The controlled energy of the album builds and builds until it’s ready to burst, Thompson’s melodies fused with the rhythms built by Hassan and Milton, still hit just as hard and loud but with more deliberate authority, while Beth’s lyrics drop some of their guard and show a more vulnerable side, asking questions like, “Is it human to adore life?”

Savages’s widely-acclaimed 2013 début album Silence Yourself manifested as a means for the band’s members to be able to perform live together. A roaring declaration to the industry and society en masse to take a self-reflective look at itself and consider changing, it was heated, contemptuous, and jarring at times. Describing their music, Beth wrote, “The music of Savages was imagined to function like armor.” The difference this time around is the band couldn’t deny their intentions—to make a record—nor could they deny that they had developed as artists, opening the press release announcing the album with, “It’s about change and the power to change. It’s about metamorphosis and evolution.”

Originally recorded in a single-room studio in London, much of the initial bones of Adore Life were scrapped for sounding too small or too happy. Dissatisfied by the direction the album was taking, the band decided to take a residency in New York in January 2015 to workshop their own album in front of a live audience. Performing nine shows over the course of nineteen days at three different venues (that at least one person not employed by the band attended all of), the band had the opportunity to test out what worked and what didn’t. They brought what did to a physically larger space, RAK Studios in West London, to re-record much of the album, ultimately creating a record that begs to be performed.

The album’s sinister opening track, “The Answer,” is full of fits of mania, desperation, begging. Beth repeatedly sings, “If you don’t love me, you don’t love anybody,” while the track grows louder and increasingly more claustrophobic. “I’ll go insane,” she sings over and over again, as Hassan and Thompson feed off each other’s raucous triplets. The track’s energy is perfectly captured by the band performing live amidst a distorting mosh-pit in the single’s music video, directed by Giorgio Testi. The obsession with love continues on the rumbling “Sad Person” as Beth sings, “Love is a disease/The strongest addiction I know,” while on the noise noir “Slowing Down the World” she asks, “Is it for you I love? Is it for you I hide?”

Repetition is something that comes up in Beth’s lyrics, appropriately enough, over and over again. “Evil’s on the other side/I will never let you down,” sings Beth before proceeding to yell, “Evil,” the song’s moniker, almost as though she is casting a protective spell. Answering her own question in “Adore,” Beth repeatedly chants, “I adore life,” and asks, “Do you adore life?,” as Milton uses the full force of her body to drum a building hi-hat beat that is fueled by pure emotion until the song cuts.

It isn’t hard to come up with musical influences for Savages (e.g. Swans, Bauhaus, Siouxsie and the Banshees), but to define these true virtuosos by other musicians would be a huge disservice. What Savages sounds like the most is Savages. Adore Life is bottled energy, energy that can shatter glass at any moment, because love may be the answer, but love is also fucking hard.

Adore Life is out now from Matador Records.