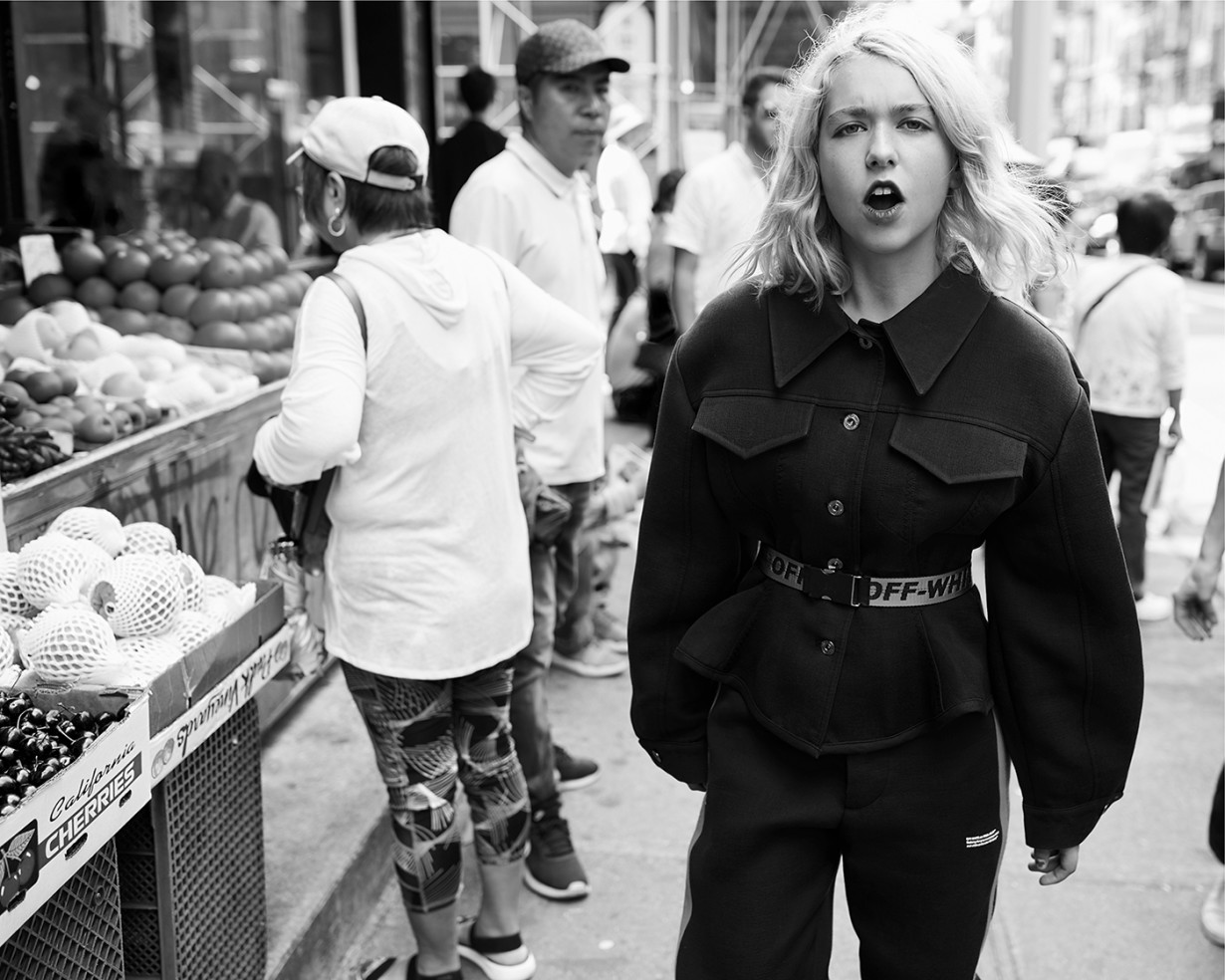 All clothing by Off-White.

When you listen to Snail Mail for the first time, your mind will begin to free associate. There’s hints of Courtney Barnett’s candid lyricism, not as quotidian nor as humorous, but almost as truthful and raw. Or perhaps you’ll hear early Unknown Mortal Orchestra in the wriggling solos or maybe Kurt Vile, but less lackadaisical. It’s a game by which Ray Brown, Snail Mail’s drummer, has been equally as mystified. “It’s taken me years to put into words how special [the] songwriting is, and I still haven’t been able to do it,” he told the Washington Post, adding that the songs emanate the sense of “something that you’ve heard before. But it’s unique enough that it’s distinctly Snail Mail.”

This distant, indefinable familiarity is a testament to the songwriter in a scene like indie rock, already very worn-through and arguably past its peak popularity. We’ve heard almost every mutation of the genre and Snail Mail isn’t exactly doing anything different but is doing so with impeccable adeptness. Just as their name refers to the once-ubiquitous and societally crucial postal system, their music is a reversion to past iterations of indie rock, perhaps suggesting that the best is already here and is just waiting to be made new again.

Lindsey Jordan is the nineteen-year-old genius behind this enigmatic band, which began almost by accident midway through her time in high school. She had only a few songs on Bandcamp and no fellow musicians to speak of when her friend got her onto the lineup for a festival in her native Baltimore. “So I formed a band just for the one show and then after that, we got asked to do seven dates with the label that we put Habit out on,” she recalls, referring to the 2016 EP that was her first success.

With the release of her début album Lush earlier this year, the band has begun to gain mass media attention. When you listen to the record, the reasons for the frenzy become clear. The track “Pristine” conjures the kind of warmth of a long summer holiday that makes you uncomfortable and restless—a kind of sunshine grunge. The repetition of a single chord and the consistency of an open string balance out the rest of the guitar, which jumps and twitches around, creating a subtly layered track. It’s a fleshed out, jingling and jangling sound that moves at a slow jogging pace, leading some to label it slowcore. It is captivating. It feels angsty, hopeful, and melancholic all at once, as the song often crescendos but never quite reaches a point of resolution. All clothing by Helmut Lang.

The grunge-like warmth carries over into “Heat Wave” (unsurprisingly), for which Jordan describes the songwriting process as “like puking onto paper and crying.” It sounds melodramatic, but she adeptly avoids overindulgence, resulting in an exceptionally shareable song, which people might not ever guess was spawned from such emotionally raw material.

Writing the album, Jordan says, “felt like I was just making detailed accounts of everything that was happening in my life, even though obviously that’s not how it comes across because the songs are kind of vague.” They always seem to delicately balance the personal and the generalized. The declarative tone of the lyrics “We can be anything/Even apart/Out of everything/It doesn’t have to be this hard/I could be anyone,” from “Pristine,” offers a heart-wrenching plea and, by laying emphasis on the “everything” and “anyone” and “anything,” Jordan projects the personal into something more than just a degrading relationship. It’s the kind of music that gives your walk home in the dark after a couple drinks a cosmic feeling—music for introspection and finding, at the very least, the semblance of clarity and meaning in your life.

But Jordan isn’t all grand proclamations of the sentimental; she uses little details to bring bathos into the lyrical cauldron pot as well. In “Heat Wave,” she sings, “Green eyes, what could ever be enough?” reducing an ex to a single trait, perhaps a reminder of first attraction or else a way of condensing a former love in order to help the healing process. “I wanted to put that in as a little fuck-you detail to get specific for just a second,” she says, and it plays out as a subtle and powerful songwriting flourish. All clothing by Helmut Lang.

Although she is still based in Baltimore, Jordan and her band decided to record the album in a remote farmhouse studio in Woodstock in upstate New York, away from even the whisper of the city. “We would do really long days and make food from the farm,” she recalls. With no internet, they enjoyed large group dinners and lounging in a hammock next to the studio. “I spent a lot of time writing as much music as possible during that time,” she explains, “and feeling very prolific and expressive.”

Despite having the semblance of utopia, there was a job to do and prolific expression doesn’t necessarily make a great album, so Jordan had to set about culling her creations. “I just knew when it was time to abandon a song and when I wanted to keep one,” she says. “If I was sick of hearing that melody over and over again, [I’d ask] if it was something I felt like I could play every night. Most of them were fragments, but I like to give the songs time.” The ability to let things sink into their natural place and cut out what doesn’t work suggests real craft, patience, and dedication. The small cost was that “it took forever and [is] a really hard process,” but it’s a price that has ultimately given dividends.

The band has been touring this summer, performing relentlessly to promote the album. “It gets a little daunting when you look at the tour schedule and you’re like, ‘Argh, I have to sing the song about the green eyes like forty-eight more times!’” she laughs. “But I do still really love all the songs, it’s just sometimes it can feel like a routine. I like to have some little change in the songs every night, [knowing that] ‘Oh I could do this [or] I could not.’ I just need some reason to be alert.” Beyond all of the songwriting talent, all of the media praise, and her growing fanbase, Jordan’s drive for constant reconfiguration and exploration is the reason that this album won’t be the last time we hear of Snail Mail. At the mere age of nineteen, there’s plenty of time and space for her to breathe new life into the genre.

Lush is out now.