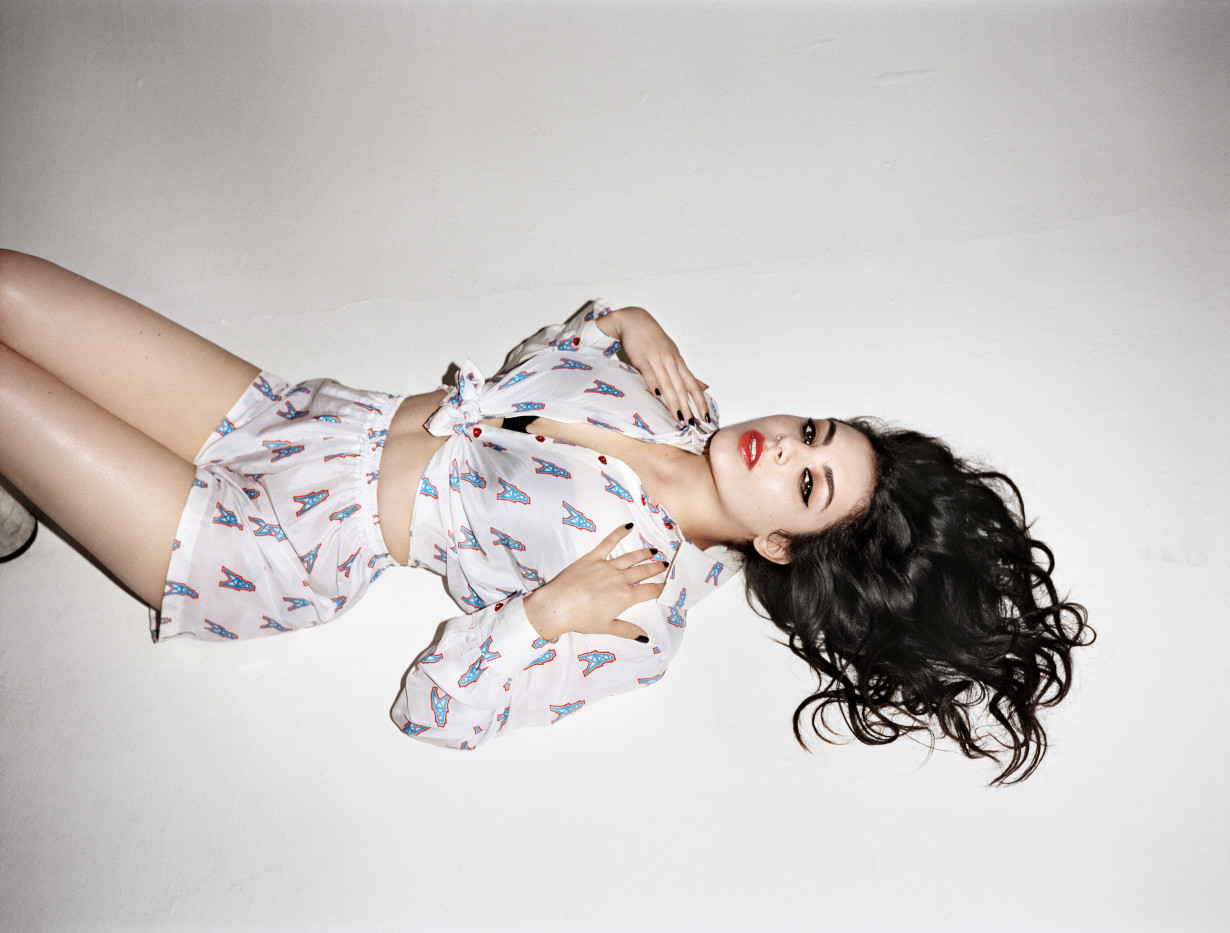 All clothing by Ashley Williams. Shoes by Buffalo.

Charli XCX sees sounds and hears colors. The twenty-year-old singer-songwriter might not know it, but she ostensibly has synesthesia, a neurological condition that makes the brain process sounds, or other sensory data, as colors. She’s not alone—other musical talents, like Stevie Wonder, Leonard Bernstein, and Frank Ocean, have confessed to seeing sounds too.

When asked what she hopes her forthcoming full-length début will sound like, XCX replies matter-of-factly, “I want it to be pink and gold and black.” It takes her a second before realizing she has to translate that into civilian speak: “luscious, thick, ocean-y pop.”

XCX’s almost-literal visualization of music could very well be a sign of either genius or madness, but most likely both. Born Charlotte Aitchison—the XCX stands for Kiss Charli Kiss—she grew up in Hertfordshire, a suburb north of London where, by the age of seven, she had commandeered a group of friends to form a band in the schoolyard. She served as a frontwoman of sorts, corralling her bandmates to perform playground renditions of her favorite Spice Girls songs. All clothing by Ashley Williams.

But as she got older, and after uncovering a whole world of music that existed outside of mainstream radio playlists, XCX switched gears from Atomic Kitten to the likes of Kate Nash, the Klaxons, and Ed Banger Records’ catalog, the latter of whose attention to both sonic and visual details she still cites as an influence. XCX replicated those references in the songs she had begun writing. She even tried rapping, as a nod to popular Ed Banger white-girl-rapper Uffie, until developing her own sound—one that combined all of those references.

As a fourteen-year-old, XCX made her début in the infamous East London club scene, releasing two EP’s that pegged her as the Next Big Thing to come out of Hackney. That led to music industry attention and scene-kid status. “[My stylist] was dressing as a Powerpuff Girl and I was dressing as a five-year-old baby brat,” XCX says about her club days.

She eventually enrolled in the revered Slade School of Fine Art, becoming a bona fide art school kid, and not simply dressing like one. Though she studied painting (and has since dropped out to focus on music), XCX proudly recalls a particular pop culture-themed performance art piece she staged, in which she dressed up as Britney Spears and sang “…Baby One More Time” in a room plastered with Justin Bieber posters and spray-painted with the phrase Britney Lives On.

“It was really cool. Everyone thought it was a bit weird though,” XCX says, in what could easily become an accurate assessment of how she ends up fitting into the pop landscape herself.

XCX says she wants to change the face of pop and the (mis)conception that the genre necessitates cheesy, plastic Eurotrash. “I think the nature of the pop market is that it’s saturated with crap,” she says. “But I think pop music is going in a direction where it’s going to be more interesting, more emotional, more romanticized, more meaningful. I want to change pop music from something that a lot of people are embarrassed to say they like to something people can say they love.”

That ambition explains why her music is undeniably pop, but undeniably more than just that. “You’re the One,” a single from this summer’s EP of the same name, begins with moody, reverb-y synths and pained yelps for vocals, but quickly leads into a soaring, glossy, optimistic, lovestruck chorus that would be at ease on a Katy Perry album.

“‘You’re the One’ is the perfect representation of what the album sounds like,” she explains, “because the verses are very dark and black and almost industrial, but the chorus is this kind of shining thing. Imagine coming out of the water and looking at the sun.”

Angsty, witch house-y lyrics like “Flying through the dark night, you’re the angel in the moonlight” are juxtaposed with sentiments that can seem to be in direct opposition. Case in point: “You’re the one that’s been stealing stars/Your golden arrow went through my heart.”

The song was written and produced with Ariel Rechtshaid, a Los Angeles stalwart who’s worked with Usher and Cass McCombs, among others. XCX’s forthcoming début album will be largely written with and produced by Rechtshaid and Patrik Berger, the Swedish producer behind hits for Robyn, Lana Del Rey, and the Good Natured.

But it’s about more than just the music for XCX—it’s a complete package, wherein her styling is as nouveau goth as her singles.

“I want to be part of a shift, a group of artists who make records but also really, really think about their visuals and the way they dress. I want to make a world of Charli XCX,” she says.

She wants to be a living embodiment of Tumblr, she says without a trace of irony. The comparison to the social network, which is filled with glittery GIF’s and arty images, is almost apt. XCX’s blend of seemingly random influences could only really exist in the context of the Internet. That goes for her music too, which—with its disparate references—is clearly the product of a ’90s baby.

“When you put pink and gold and black together,” she says, tapping into her synesthesia again, “you get a mythical dragon going through a lush ocean.”

Genius? Madness? Most likely both.

All clothing by Ashley Williams.