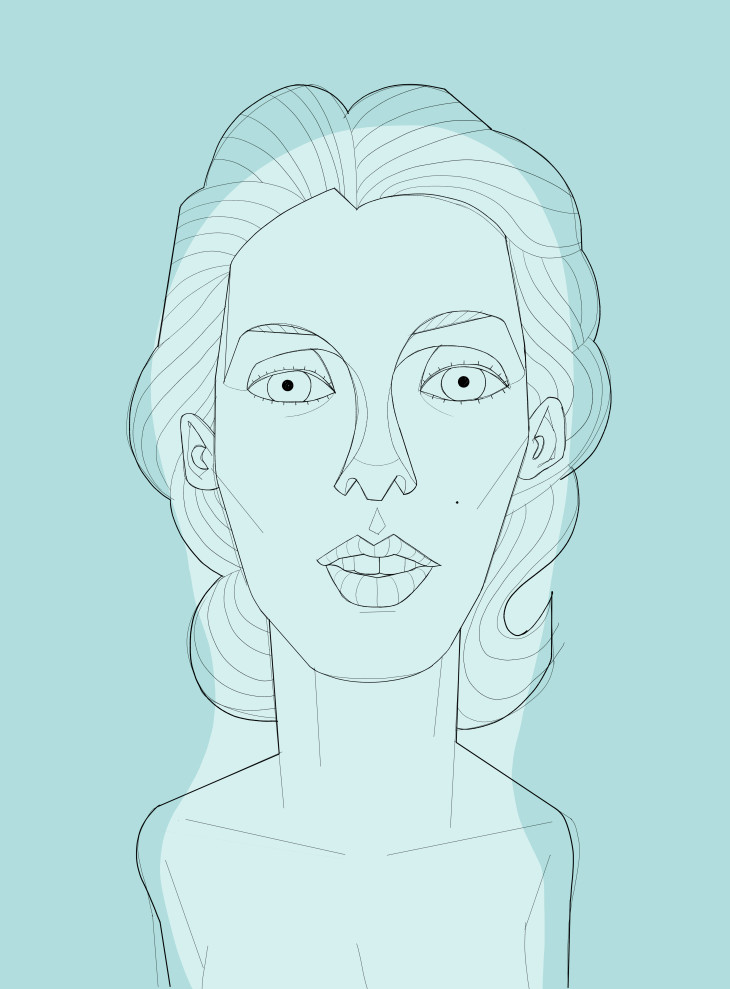 On a good day, without much traffic, it takes about eight hours to drive from Chicago to Toronto. It’s almost a straight shot east, if you can navigate the jutting fingers of the Great Lakes that curl downwards toward the I-94.

That span of space, nearly five hundred miles, captures the sometimes-crooked, cross-border arc of Meghan Remy’s career. Remy, the singer, composer, and creative mind behind U.S. Girls, grew up in Chicago before moving as an adult to Toronto, where her music has not only developed new shades and confident rhythms, but also garnered broader acclaim and recognition.

Remy defines herself through her music and it, along with her, has grown in complexity. At first, however, U.S. Girls was an escape for Remy during a toxic time in her life. “From a young age, I decided I wanted to live an artful life,” Remy says over the phone from her home in Toronto’s Riverdale neighborhood. “Before, I was making music for my mental health, getting me strong with myself. I was going through stuff that was just greater than I could deal with, and I was fortunate that I chose to go to music [rather] than to go to drugs and other stuff. And I toed the line with it, but there must have been something inside of me that forced me to make music,” Remy explains. “When I look back on it, it doesn’t feel sad or fucked up. It feels like my subconscious was driving me and knew what it was doing.”

Remy was struggling with self-esteem issues, finding herself in relationships with men that were abusive. Music became both a calling—allowing her to express herself creatively—and a way out. “I was living with a man who was very smart and interesting and charismatic, but who was insane and abusive,” Remy says. “I was trapped in an apartment with him and the only thing that he responded to was if I said I was making music. I started taking great comfort in being able to shut the door and get away from him and work stuff out.”

The music that came out of Remy was by turns dark and cheerily warped. Remy’s natural timbre is plaintive, staccato, and elusive, her voice skipping over her perpetually shifting, collaged beats hauled up from a vault of grainy samples, vintage influences, and distortion. The more experimental noise-rock of her first albums—Introducing and Go Grey—has gradually been peeled back to reveal albums like Gem, from 2012, that pull more heavily from glitch-pop, hip hop, and R&B. Musically, that evolution corresponded with a major personal change for Remy. “Five years ago was huge, everything shifted for me,” she says. “I was just done with the bullshit and done with the drama. I wanted to commit my energies toward my work, to being happy, and just trying to be healthy.” That change was helped along when Remy met her husband, Toronto-based producer, musician, and actor Slim Twig.

“We met in 2010 and quickly fell in love,” Remy says of her husband. “I came up to Toronto to visit when he was recording A Hound at the Hem. I was just kind of in the studio hanging out and he was like, ‘Let’s do a song for you.’ I’d never made music in that setting”—exposed, out in the open—”I’d always sort of done it alone in my room, doing everything by myself.”

The result was “Island Song,” a breakout track and stylistic departure compared to U.S. Girls’ previous tracks. The song balances Remy’s sonic menace with a shuffling detuned piano and an echoing organ bass line. It sounds like a choir melting under a magnifying glass, but it was also one of the first tracks off an album that finally brought Remy’s voice out of the shadows of distortion and into the open. It was a quantum shift in how Remy created music. “I was fighting, making that song because I was so uncomfortable,” she recalls of the recording session. “I kept leaving the room and [Slim Twig] was like, ‘Just do it,’ because he knew it was going to be to my advantage [to make the song] and also to expose myself to people that I respected musically.”

Those touchstone sonic elements—playful instrumentation, heavily collaged samples, rhythmically intricate lyrics—have made their way into the new U.S. Girls album, Half Free, released last fall on 4AD. It is more pop, more danceable, and more immediately catchy than Remy’s previous albums. “I mean, that’s kind of the point,” she says. “I’ve always been working up towards making more pop-minded music, because that’s the way you reach people, and the people I grew up worshipping were the pop idols that had a message.”

It is perhaps ironic for Remy, an Illinois native, to be hitting her musical stride as a resident of the Toronto music scene, but ideas of place and location have never been core to her music. “I don’t really like the idea of borders and countries,” she says. “We’re all just humans, and geography makes for more differences. We’re going to hit this point soon where we’ll need to start recognizing ourselves as part of the same planet.”

That humanist force is central both to Remy’s music and her mission. (“We’re living in such a crazy time and even the psychic energy is so dark, I don’t know how people can make things that aren’t mining from that.”) Remy has made a career out of mining, tapping into rich veins of music history to create sonic patchworks that feel borrowed and familiar, but also a larger sum than their disparate parts. “I think that’s always been a part of my work because it’s something I grew up with,” Remy says. “My mom was a Motown chick and my dad was really into Zappa and all kinds of rock. I always had the radio on as a kid.

“I use a huge jumbled mess of things old and new. In the new record, [producer] Onakabazien made a bunch of beats for me—I met him around the same time I met my husband. He’s got a crazy ear and he understood me. We have a huge love of R&B and hip hop and soul. It’s kind of like a big collage. My stuff has always been that way. I think that’s part of the world we live in now,” Remy says of a culture she sees as populated by aggregators and inter-folding references. Remy has also paired up with Amanda Crist, Ice Cream, and Slim Twig for the new album, culling from nearly a decade of tapes, samples, and the songs that have defined her.