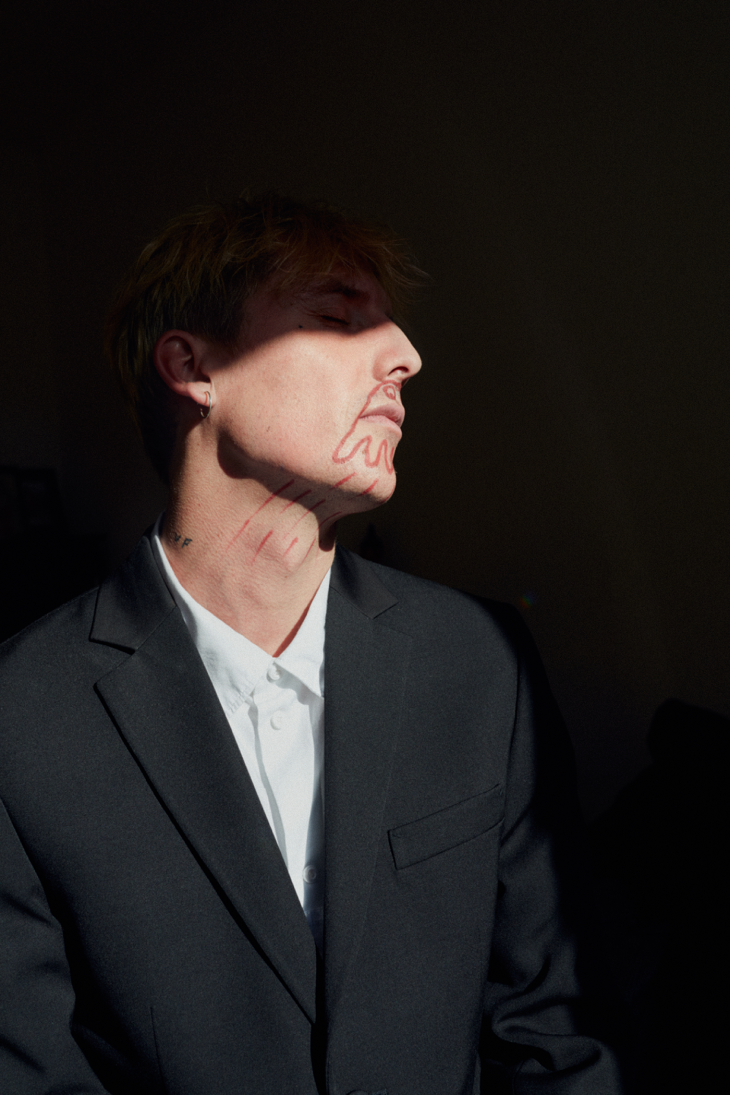 All clothing by Acne Studios.

Imagine sitting on a warm, sunny beach, stuck under the shade of an umbrella, alone and brewing with angst. This is the essence of Zacharias Zachrisson’s new wide-ranging solo project, Vacation Forever. As the younger brother of Lykke Li, Zachrisson is making waves of his own, but the journey to find his signature sound has been arduous one. Formerly the drummer for a band called Tussilago, Zachrisson used to suffer from extreme stage fright, which became debilitating while out on tour. During one of their gigs in Oslo, his affliction reached its peak, resulting in a panic attack. Frustrated, he left the band vowing to never go on stage again, but he could not abandon music altogether. Having never been on his own before, Zachrisson spent the next few years feeling a bit lost, “experimenting with different ways to write music,” he says, before coming up with Vacation Forever. This eclectic, emotive new musical endeavor started out strictly as a recording project, but eventually, Zachrisson was forced to come head to head with his biggest fear.

Now having performed in venues all over Europe as Vacation Forever, conquering the stage has proved to be the solution for two major challenges that Zachrisson has faced: pursuing a fulfilling career and tackling his inner demons. A hard reality he had to come to terms with is how financially difficult it is for a musician to continue making music if he does not tour. “I could actually write music for commercials and shit, but I don’t want to do it if it doesn’t give me anything,” he says. To Zachrisson, as both a creator and listener, the most important aspect of music is the feeling: “If you don’t have that, then it’s not worth listening to.” So, as a means to keep creating meaningful music, touring became an unavoidable aspect of his career. Left: Pants by Back. Ring on right index finger by Maria Nilsdotter. All other jewelry, talent’s own.
Right: Shirt by Diana Orving. Trousers by Adidas.

Despite this realization, performing live was still a huge source of anxiety. The stakes became even higher when Zachrisson realized he had to perform his second gig as Vacation Forever in the same Oslo bar where he had his panic attack. Terrified to repeat history, he wasn’t sure if he could go through with it, but the performance became an unexpected triumph. “I kind of made it,” he recalls. “I smashed my guitar on stage and I was like, ‘Whoa, what happened there?’” Although he still wrestles with his anxiety before each live show, the encore gig in Oslo allowed Zachrisson to trust himself and his skill as a musician, regardless of how nervous he gets.

One might assume that Zachrisson, having overcome his biggest fear, is now striving to become more assured in his music, both on stage and in the studio, but that is not exactly the case. He openly admits that he is afraid of becoming too confident and will only learn an instrument to the point where he can play it, but not exceptionally. “When you know your stuff too well, you have certain techniques you fall back on,” he explains, “but when you’re creating stuff, it’s nice to just be trying, trying stuff out until it works.” It’s clear that this open-ended creative process is important to him as he describes it like a new relationship where “you don’t really know what you’re doing, but you’re in love with it.”

Left: Shirt by Diana Orving. Trousers by Adidas.
Right: Trousers by Back. Rings by Maria Nilsdotter. Being open to so many creative pathways was bound to yield some surprising results, which are very evident on his recent début Vacation Forever EP, which many critics have called genre-defying. Each song presents a different sound, from Nineties grunge to chillwave, but Zachrisson has aptly named it ‘tropical emo.’ Pleased with the EP’s reception, he acknowledges however that his diverse range of styles might alienate some people if they aren’t willing to be challenged, which is why he’s already changing things for his upcoming album release, straying away from synthesizers for a more stripped-down punk vibe. “I’m going back to the music that I was listening to when I was growing up,” he says, “because my dad played in a punk band and my mom was the first female lead singer of a girl punk band in Sweden.” However, he also finds that his new stuff is much “more straightforward” and hopes it will strike a deeper chord with his listeners. “Maybe I’m a little too much in my own world with the music I’ve released now, but I’ve been learning lately how to express myself in a way that more people can feel a connection with it,” he offers. “For example, I did a song the other day and it’s just guitar and vocals without any big arrangements, so it hits a nerve that you can really feel.” Zachrisson strives to create a universe in which every aspect of his new album will make an impact through his raw performance: “It’s punk. It’s here and in your face, whether you like it or not.”

Providing that sense of connection is of the utmost importance to Zachrisson, who wants his listeners to know “that it’s okay to feel totally helpless” because he’s felt that way too. When it comes to discussing his struggles with anxiety and depression, Zachrisson is anything but shy, simply stating that “Life is hard. You have to talk about it.” For him, listening to sad music has the ability to create a larger-than-life feeling, which combats against his loneliness and isolation. Bands like Radiohead have been a great comfort to him in times of need and he emphasizes that, without music, he would have died. “I had a few moments where I was like, ‘Fuck this, I’m just going to end this,’ but then I put on music and I felt that it was worth working hard and trying.” This is the kind of hope that Zachrisson wishes to instill in his listeners as well: “People all over the world feel the same way you do, and if you’re a person that can be open with that in public, maybe it will help younger kids.” Left: Jacket by BOSS. Shirt by Schnayderman’s. Ring on right index finger by All Blues. All other jewelry, talent’s own.
Right: Trousers by Acne Studios.

Resiliency is the key to Zachrisson’s personal and professional growth and also the overarching theme in his advice to other struggling musicians. “You just have to keep on putting yourself in that situation and work really hard for it,” he offers. “There are no shortcuts. You just have to do it. It’s also okay to write bad music. Whatever! Things just take time. You do it over and over again.” Zachrisson laughs when he reflects on all the “shitty songs” he’s ever made, joking that if anyone heard them now, they would call the cops. He also makes it clear that failed songs are nothing to get upset over and that it’s all just a part of the process: “It’s okay to work really hard on something and then realize, ‘Oh fuck, this is shit,’ and then just go, ‘Okay, well whatever, I just have to start over again.’”

It is this mindset that makes Zachrisson’s Vacation Forever project such a force. Not only does it reflect his own challenges and strife, but it also encourages an open dialogue about mental health, encouraging those who struggle to keep trying every day. While this type of vulnerability typically goes against the expected ethos of rock, Zachrisson’s work shows that there is power in speaking so unapologetically about the bad days and helps to dismantle the stigma that surrounds mental illness. Bursting with passion and honesty, Zacharias Zachrisson is an artist to get excited about. Jacket by Oscar Jacobson. Top by Schnayderman’s. Trousers by Acne Studios. Bracelet, talent’s own. Rings by All Blues.