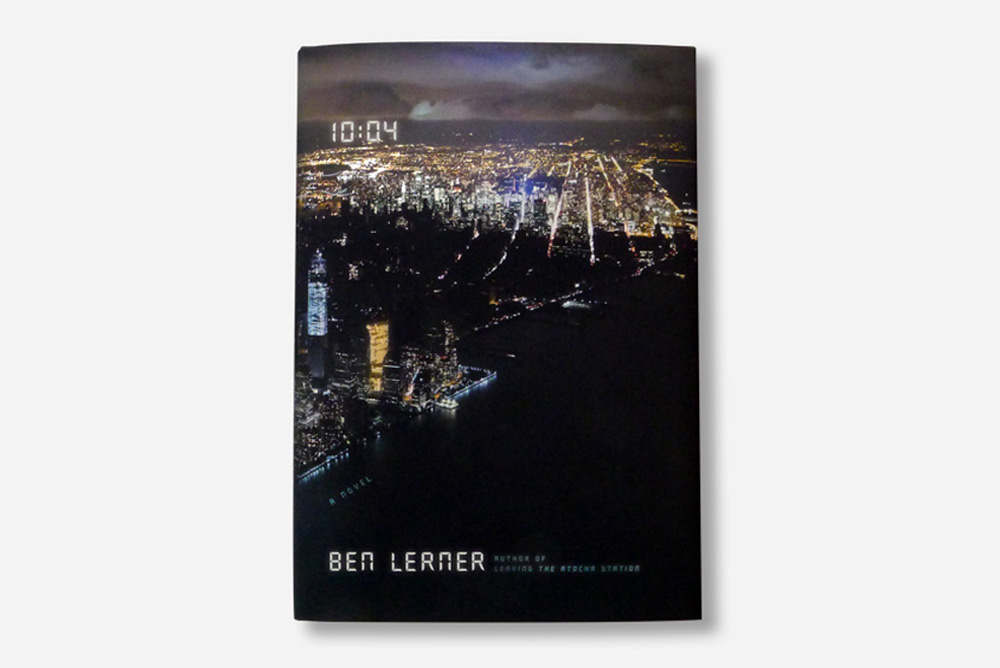        When Ben Lerner produced his first novel Leaving the Atocha Station in 2011, he was already an acclaimed poet with three highly regarded collections of poetry to his name. He published his début, which centered on a young American poet on a fellowship in Madrid, with Coffee House Press and “didn’t think anyone would read it,” he says. Leaving the Atocha Station went on to become one of the most talked-about novels of the year, appearing on several best-books lists. Now Lerner is back with a new novel, 10:04, which again focuses on an American writer trying to finish a creative work. This time, the narrator is a poet who, having earned critical accolades with his first novel from a small press, receives a six-figure advance from a major New York publishing house to write a new one.

What makes Lerner such an exciting writer, however, is neither irony nor clever metafiction. 10:04 is not a mere novel about a writer writing the novel that the reader is reading. Far from it. As the narrator of 10:04 explains to his agent, his plans for his new novel are more ambitious than that: “I’ll work my way from irony to sincerity in the sinking city, a would be Whitman of the vulnerable grid.” Set mostly in present-day New York and bookended by the two recent hurricanes, Irene and Sandy, 10:04 covers a lot of ground: lavish consumption and the Occupy Wall Street movement, Donald Judd’s installation in Marfa, Texas, and damaged art works freed from the market, artificial insemination and sex between best friends, and much more.

On a summer afternoon in Brooklyn, Lerner talked about his new novel and what attracts him to poetry and to the novel. Lerner’s novelistic output shares certain characteristics with his poetry. “Poetry is the event of reading the poem and not what the poem describes in the world, even though those two are inextricable,” says Lerner. “Great poems, like those of John Ashbery, never quite become real. They have strategies for defeating their actuality in order to preserve a glimmer of the potentiality of poetry.”

The narrator of 10:04 eventually turns his back on the idea of writing a novel to “compose verse underwritten by a millionaire’s foundation.” Lerner has more admiration for the novel than his narrator does. “What I love about the novel is the way it can absorb other genres into one structure,” he explains. “The novel is fundamentally curatorial. In a novel, you can narrate the construction of a poem, narrate an encounter with the art of Donald Judd, discuss the anxiety of narrative, and include elements of criticism.” In fact, 10:04 includes a discussion of the “Institute of Totaled Art,” a veiled account of the real Salvage Art Institute, which collects damaged works of art deemed valueless by the market, and about which Lerner has already brilliantly written in an essay for Harper’s Magazine.

In addition to its æsthetic merits, 10:04 is also a search for values besides the financial. “The novel can be totally honest about how literary reproduction and class reproduction get caught up with one another,” says Lerner. “For me, writing 10:04 was also a way to track my own movement into the contradictions of the book as a commodity. The novel is part of the market, but that does not mean that it’s a commodity like any other. One thing that the novel can do is show the discrepancy between the extreme wealth and the extreme poverty that coexist in an urban environment like New York, every day before our very eyes.”

Like few contemporary novels today, 10:04 tells you exactly how the food gets on your plate and who is serving you. In an era of ironic detachment and political apathy, Lerner’s 10:04 makes a strong case for art that can move from irony to sincerity. This is not the bogus sincerity of reality TV, where everyone wants to tell their story, but sincerity, still mediated by form and language, that seeks to imagine new possibilities of being, feeling, and thinking together. Speaking about this new need for sincerity, Lerner says, “10:04 uses artistic form to research new forms of feeling and thinking that are not merely monetary and to imagine new ways of collective being.”

In 1993, in his essay on television and literature, David Foster Wallace lamented the stasis of the self-conscious irony of American contemporary metafiction, which could no longer separate itself from the “passive addictive TV-psychology” it was trying so hard to assault. Wallace couldn’t see what lay ahead for American literature, which for him had only two equally depressing alternatives: impotent postmodern ironists or the sincere “anti-rebels” of the future who’d be “backward, quant, naïve, anachronistic.” He ends his essay on an urgent question of where to go next. The answer is Ben Lerner.

Alisa Sniderman is a writer based in New York. Her writing has appeared in Salon, the Los Angeles Review of Books, the Sydney Morning Herald, and elsewhere.