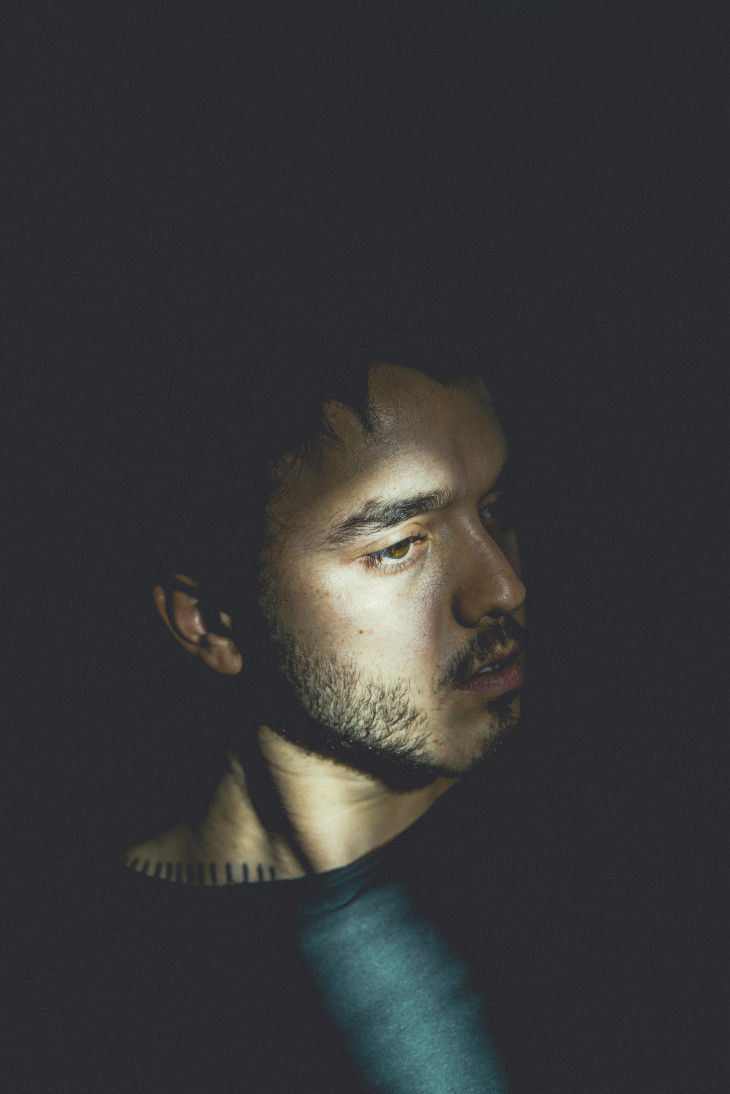 The superstition around Friday the 13th is one that has been long fetishized by Western culture, but last week, that all changed; as we came together to mourn the violent attacks on civilians in Paris, the day came to forevermore hold a heavier place in our hearts. Just earlier that day, BOOTS, whose real name is Jordan Asher and who goes by Jordy, released his début full-length album AQUΛRIA. In the evening, Asher declared over Twitter, “Heart is so heavy. The world can be a monster. I’m sorry to everyone who didn’t get a choice tonight in Paris. My love goes to you all,” proceeding to dedicate that night’s release show in New York to Paris. The heavy emotions Asher expressed that night are a glimpse into what he reveals to us through AQUΛRIA.

“The whole idea for me was to create something that, in its presentation, at first, was trying to push people away,” says Asher over the phone a couple of weeks before the album’s release. Elaborating his seemingly alienating statement, he further explains, “not people listening, but the idea that, maybe we’re so closed off in our own little fake bubbles and fake world, that we try to push people out.”

Asher’s personal relationship with music began at the age of two when his father, a jazz bassist, put a pair of headphones on him. Listening to records for hours, he was introduced to his father’s favorites—jazz, soul, early Motown. “I remember, even then, I really, really needed it and wanted it, to where when I became five and six years old I had a boombox that I used to put tapes into and I used to record songs off the radio.” Around twelve, Asher began making music on his own. “I started making beats on an 808 that I found in Miami,” he says, later adding, “All I wanted to do was play music, much to my parents’ chagrin.” Next came writing songs on the guitar and the piano—all self-taught. He was sixteen and dropped out of high school.

It would still take years, encompassing being in several bands, touring, and eventually moving to New York, for Jordy Asher “the musician” to refine his sound and become BOOTS “the artist,” who now manifests in AQUΛRIA. A juncture somewhere between hip hop, rock, and electronic music, the album is Asher rallying people to “take the world back” by resolving the dystopia we current live in. Fielding fire with the spirit of the Dead Kennedys, but rooted in the brooding industrial rock sound of Nine Inch Nails and the electro-synth of Aphex Twin, with the waxes and wanes of Radiohead and Chemical Brothers, and a flow reminiscent of Outkast and Gorillaz, Asher seeks to find a groove for his individual and exquisitely engineered sound.

There is a natural build-up in the album, which opens with the ascending “Brooklyn Gamma,” featuring Asher’s spoken lyrics over a rhythmic sequence constructed around the building high-hat backbone that eventually pops off. This strong setup is something Asher credits to one of the key producers of the album: El-P, who among other accolades is one of the founding members of the hip-hop supergroup Run the Jewels. “El-P had listened to it and at the very end he suggested that we just fucking ‘bring the noise’ and we had to make it hurt,” Asher says of the producer’s contribution to the track. “And I hadn’t thought of that. I kind of wrote it in one gear.” Drum virtuoso Carla Azur, of the experimental rock band Autolux, brought that noise: “[She] came and played that one take and all of a sudden it was this new animal, this new kind of beast.”

Asher, who is twenty-nine, isn’t a stranger to collaboration. “You learn a lot about yourself, you learn a lot about other people, you learn a lot about the experience and how hard it is,” he says of his background, spanning over a decade and including fronting several bands, the most successful being indie-pop duo Blonds, producing the upcoming Autolux album and four of the five tracks on FKA twigs’s 2015 EP M3LL155X, a feature on 2014’s widely acclaimed Run the Jewels 2, and his best-known contribution to pop music, the work he did on Beyoncé’s self-titled 2013, producing eighty-five percent of it and writing several of the songs, including “Haunted,” a song he was initially saving for his own début album. “It’s the only way I can grow,” Asher says, later adding, “It’ll even stir something up in you that you wouldn’t have thought.”

AQUΛRIA’s pop capacity crests with the title track, as it layers Asher’s rhythmic clapping over his sing-rapping when, as he describes, he is “imagining myself as the person on the frontline.” While fighting his good fight for his ideal world—“a place of freedom and knowledge, based off of undeniable truth and not hearsay,” the light comes from Angel Deradoorian (formerly of the Dirty Projectors) as “the voice of reason,” as she plays devil’s advocate, singing, “Don’t cross the river with an alligator underneath your knees/The golden promise of desire resting underneath the seas,” continuing to the bridge to exclaim, “Ha! Blame your own/Ha! Blame your idols/Ha! Watch it fall, watch it fall/Watch it crumble.”

Ultimately, pop bones do runs through the tracks on AQUΛRIA, and for Asher, that is a good thing, as he insists, “I would rather be a pop artist than anything else.” His unique levels of production are in effect changing our preconception of what modern pop music sounds like, creating relatable, emotionally resounding music that speaks to our veracity. “[The] truth is that we could be sustaining ourselves in a positive way in our lives and on the planet, with each other and relationships and being in a way that’s more positive or more healthy,” says Asher, as he uses every opportunity to push his fight. “Bombs Away” oscillates between spoken word and vibrating industrial riffs before ultimately closing on Asher singing, “Hope is for the tragic/Sell me down a new stream/New world has new dream/Watchful eyes can’t stay/Tuck into the blast, we’re singing bombs away.”

Asher’s commentary seeks a realm of ideological absolutes. Telling a story that doesn’t sugarcoat experience, these songs are his inward and outward struggles, his successes and his failures lyricised. The dystopian animated video for “C.U.R.E.,” reminiscent of old Gorillaz videos and the cult-favorite anime Cowboy Bebop, shows the double-cross BOOTS logo being fed into The Machine. “C-U-R-E,” spells Asher, “That’s what I’ll be.” It’s a confident statement for an album that closes on the somber “Still,” in which he sings, “They’ll keep pulling off your wings.” But he wants his ultimate message to be positive, saying it’s about “eventually getting to a place where we open ourselves up to let others in, in a real way.” In a world that can often appear to be drowning, Asher is swimming up to the light. Here’s to hoping that light reveals the top of the charts.

AQUARIA is out now.