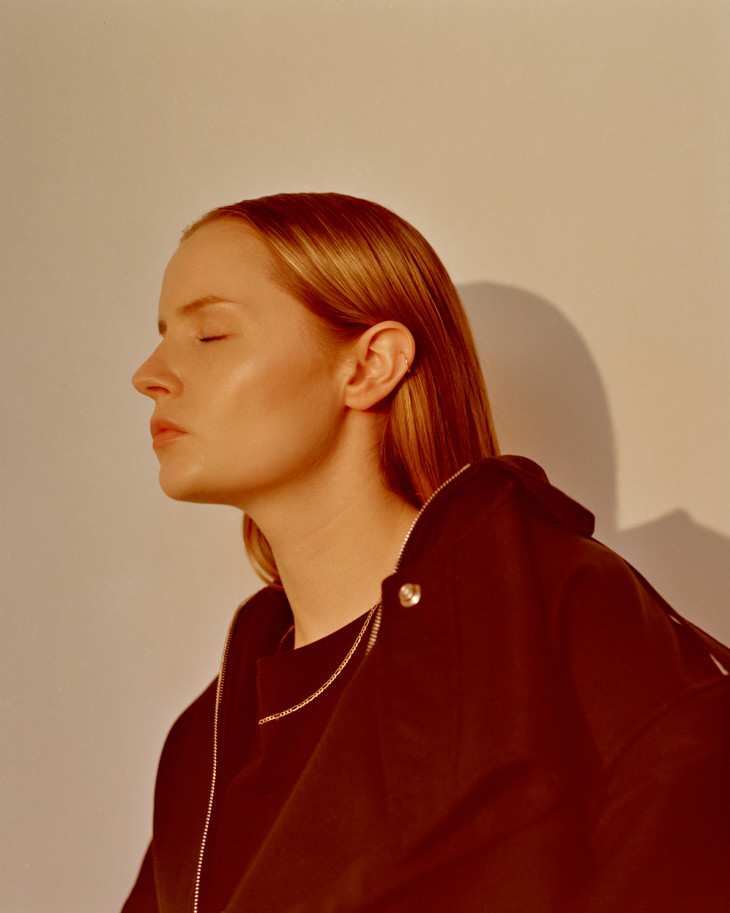 Jacket by Kathryn Bowen. All jewelry, talent’s own.

Styling by Nelly Akbari. Hair and makeup by Ronnie Tremblay at P1M.

Charlotte Day Wilson sings in English, but her latest EP, Stone Woman, evokes a Portuguese word, saudade. It roughly translates to a nostalgia you can’t do anything about and conjures a tense undercurrent of emotion that never quite spills over into the open—a feeling that runs through Stone Woman’s six tracks as Wilson, her voice husky and smoky with a trace of Adele, seduces you with its bedroom-appropriate level of intimacy.

It’s a bold level of emotion that seems appropriate for the 25-year-old Canadian singer and multi-instrumentalist, who has never been shy about aiming for something different. Like Grimes, Wilson likes to write and produce her own music, giving visibility to a female voice in an industry where ninety percent of the production falls to men. She has also managed to finance her music herself—she isn’t signed to a label, so she receives all the money made out of her own songs—meaning she has an enviable amount of control, both creatively and financially, particularly for a young artist. Independence is a game that’s difficult to win, but if anyone’s going to beat it, it will be her. Coat by Andrew Coimbra. T-shirt by Vivienne Westwood from Simons, Toronto. Jeans by Cheap Monday. All jewelry, talent’s own.

Wilson grew up in the west end of Toronto in a musical family—“they’re not necessarily professional, but they’re musicians and in the industry,” is how she describes it—which at least led her to know that a career in music was viable. As a child, she learned piano and studied at Toronto’s Royal Conservatory of Music, where she enjoyed finding creative ways to play the cadences and chords she came across in her classical repertoire. In college, she explored women’s studies, music, and philosophy at the University of King’s College, a liberal arts school on the far east coast of Canada, and joined a band called the Wayo, but soon realized the academic life wasn’t for her. After that, she moved to Montreal for six months to lose herself in writing her music, before securing an internship with the Toronto-based record label Arts & Crafts, who represent the likes of Feist and hip-hop/jazz ensemble BadBadNotGood.

If it seems a little nomadic, it’s clear that all these influences have ultimately proved good for her. Last year, she provided vocals for BadBadNotGood’s latest album; in return, their drummer Alex Sowinski sent her the instrumentals that would ultimately inspire Stone Woman. She still draws on her classical background today and often starts composing by playing a song until she finds chords that stand out to her, before layering, mixing, and producing these into one of her smooth, R&B-inflected tracks. Coat by Andrew Coimbra. Top by COS. T-shirt by Acne Studios. Earring by 12TWELVE.

If Wilson’s first EP, CDW, revealed an ability to turn influences from the blues, minimalist soul, and more into skillfully crafted ear-pleasers, Stone Woman exposes a deeper emotional capacity in its pensive rhythms and introspective lyrics. In “Doubt,” Wilson questions the contradictory nature of desire; on “Nothing New,” she rolls her eyes at a relationship going nowhere, but leaves a lingering sense that she might still want it to go somewhere. In the final track, “Funeral,” she explores the end of her interest in a relationship and injects the track with a free jazz-inspired saxophone bridge (she plays piano, saxophone, bass, and guitar) that soars and then fades, like she wants the listener to join the poignant ride with her.

“When I listen to [Stone Woman] now, I can tell I was going through a lot,” says Wilson, who used the album as a way to deal with sentiments she found forming after the release of CDW. “So much was happening in terms of my career and it’s really hard to not let that affect you in a personal way or your mood.” As a result of this intense emotional period, she says, “the edges rubbed off my emotional spectrum a little bit.” The phrase “stone woman,” heard repeated, yearningly, in the title track, refers to this sense of stoicism she developed. For both the EP and her daily relationships, the idea was to “keep going but not be too comfy; to be emotional but not too emotional, to express how I felt but not let people see into my soul.” This balance wasn’t easy when she started out as an independent artist—”I didn’t have any money when I first put out CDW,” she says, but she got lucky and received organic interest, a feat she says is easier thanks to the internet. Now she has her own studio, where she plays out her ideas, although recently she has started creating more material with producers “just to switch up the process,” she explains. (She points out, however, “When I get the chance to work in a studio, I’ll take it, but I don’t generally pay for studio time. Whether it’s a fault or not, it doesn’t feel right to pay to make your art.”)

Ultimately, Wilson’s aim is to change the entire studio production industry. “I’m not here to have one really good year and then fall of the map,” she says. “It’s about me feeding my own empire and then eventually turning everything into something bigger. When I’m sixty, I’ll have my own studio and I’ll have my own company and I’ll be helping younger songwriters and supporting women. I don’t want to always be the singer/songwriter.”

Stone Woman is out now. Jacket by Kathryn Bowen. Trousers by Yang Li. All jewelry, talent’s own.

Styling by Nelly Akbari. Hair and makeup by Ronnie Tremblay at P1M.