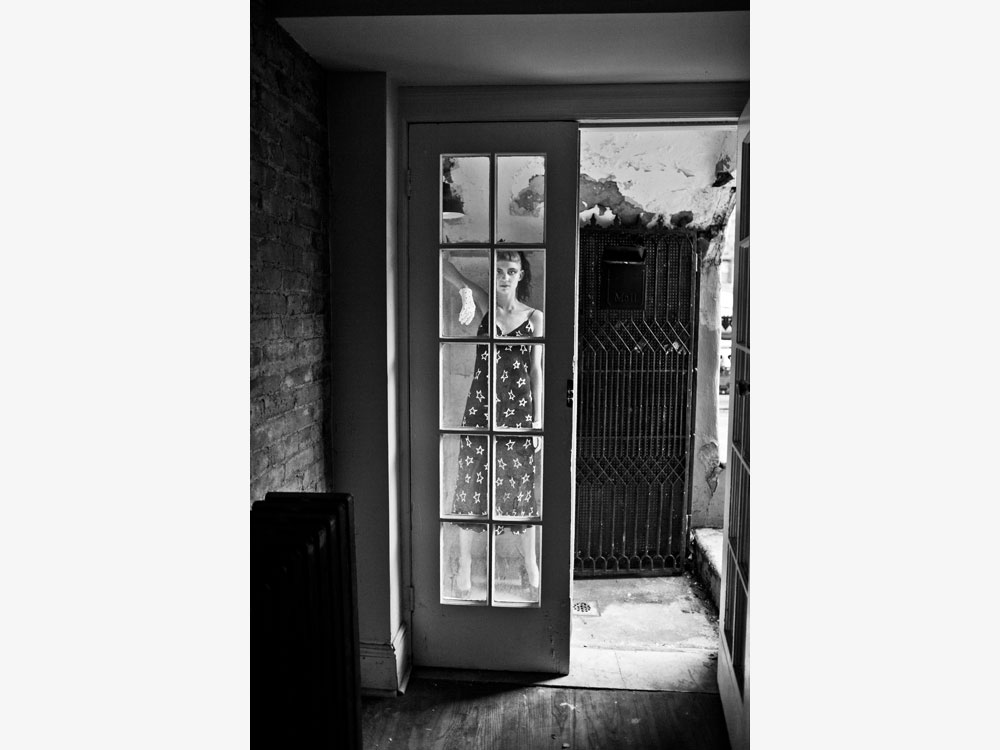 Dress by Maison Martin Margiela.nHeadpiece by I Love Factory.nGloves, stylists own.nnStyling by Laurel St. Romain and Daniel Randell.nMakeup by Claudia Lake.nSpecial thanks to Ashley Ayers.

When Claire Boucher was a kid, her inability to sit still often got her kicked out of class. “I would constantly be tapping my foot or my hand and if I stopped, I’d start kicking,” says Boucher, the 23-year-old singer/producer behind the dynamic art-pop act Grimes. “I think I was really annoying. I was super-hyperactive.”

Though the movement disorder that made her fidgety as a child has since dulled, not much else has changed. The Vancouver-born Montreal transplant, who currently splits her time between the two cities, is just as excitable today. When we speak just after the holidays, Boucher is going on three days of no sleep. “I’m definitely hyperactive,” she says. “Like, to the point of exhausting myself but my brain is still working.”

The nonstop hum of activity that marks Boucher’s daily life seems to govern her creativity, too. In less than two years, she has released four records, directed a handful of music videos, and gone on four US tours. Her latest album, Visions, which she wrote and recorded by sequestering herself in her apartment for three weeks after coming home from a tour—”I blacked out the windows and just didn’t sleep,” she says—is itself an exercise in hyperactivity. The songs, to be put out by indie stalwarts 4AD, jam together a surprising number, and mélange, of references and influences, quickly bouncing back and forth between ideas much like she does.

Chief among Boucher’s inspirations for Visions were R&B (Mariah Carey, in particular), new jack swing, IDM, and experimental hip hop—all of which represent an unexpected, impressively diverse mix. “I wanted it to sound like if Aphex Twin produced a new jack swing record,” she says. But she also lists Shanghai lounge music (“I’m from Vancouver, so [Asian culture] is almost a part of my psyche. It’s part of the inherent influence that I grew up with.”), Outkast (“Stankonia was the first record I ever bought. I think they’re some of the most avant-garde musicians of our time.”), and the Dungeon Family production crew (“Those producers are really into super-experimental production but they put it into this kind of pop and hip hop lens, so you don’t even think about it too explicitly.”) as sonic stimuli.

But while these disparate references may seem unlikely, Boucher accounts for them by describing herself, and her generation, as being post-Internet. In other words, having access to near-infinite amounts of media during adolescence must have shaped her, and her peers’, interaction with it. “The absorption rate for people who grew up with the Internet is just so much higher,” she reasons. “As compared to my parents, [during whose adolescence] you would have had to get in the car or get on the bus and go to the record store to get one record, I had ten records a day.”

Though she was an avid, obsessive fan of music growing up, it wasn’t until much more recently that Boucher began creating it herself. While pursuing a degree in arts and sciences at McGill University in Montreal, she began experimenting with looping ambient sounds and layering moody vocals. A couple of years later, having lost interest in her psychology and neuroscience classes, she began to consider music a viable career option and income generator. In September of 2010, Boucher finally dropped out of school to focus more seriously on her craft. “I’ve always wanted to play music. But I just didn’t really know how to,” she says.

While such novicehood would limit many, Boucher plies it to her advantage. Not having a background in music—rather, she was a visual artist and ballet dancer in her youth—allowed her to experiment more freely than would someone tied down by the strictures of formal training. “No one had even explained to me the concept of a song structure, so I just didn’t even heed it at all,” she says of her initial forays into writing. “When I dance, I have such a ballet training that I can’t get it out of my head. But with music, I feel so free about it. I feel like there are so many possibilities.”

Indeed, a listen to any of her albums reveals a defiance of traditional notions of composition: On Visions, for instance, hooks are largely indistinguishable from verses, as are background vocals from primary ones. Melodies are spastic, rhythm is staggered, tension is virtually nonexistent, and cacophony abounds, all taking on a sense of improvisation. But while these qualities would normally signal disaster, here it makes for delightfully carefree pop, where rules are flouted in such a way that renders them irrelevant. Boucher has come a long way, and her initial amateurism has, ironically, helped her shape her musical identity.

But the electronic music scene is notoriously a boys’ club, with hackneyed notions of gender often reducing women to mere singers in the public eye. There is a pervading notion that behind most front-women is a man twisting knobs and fiddling with things like synth lines and beats per minute, and it’s one that frustrates her. “It’s really important for me to be respected as a producer,” says Boucher, making an apt comparison to male musicians who write and perform their own music without being questioned about it. “I can’t believe how condescending it all is. But I’m going to change perspectives by being the best.”

Visions is out tomorrow from 4AD/Arbutus Records.