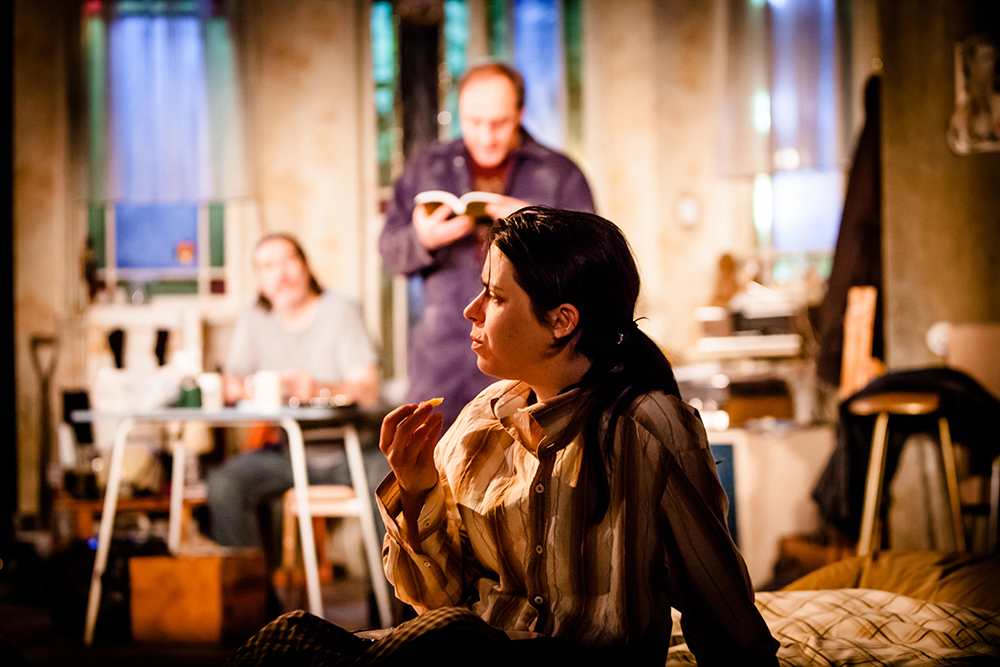 Conor McPherson is a wizard, but you wouldn’t know it. There is little flash in the playwright’s works, only the occasional bang—even pivotal moments are for the most part served up at room temperature in a way that can sometimes leave you feeling unsatisfied but that never, never rings as false. More keenly aware than most of the banality of both our hurts and our joys, McPherson is not one for setting off fireworks, but with surprisingly little material, he can build a fire you will watch for hours.

And that, in essence, is what he’s done here in The Night Alive, currently playing at the Atlantic under the direction of the playwright himself. The play centers around Tommy (Ciarán Hinds), a forty-something piecing together work here and there while living in a room in his uncle’s home, and the relationship he develops with a young woman he rescues one night from a violent boyfriend. The moment the lights come up on Tommy’s apartment, we know what world we have entered. It is a world of stain and clutter, of gauzy, rancid afternoon light trickling in through the tattered window covering and every visible thing one week or one wear beyond its washing date. Dishes crusting in the sink, ripe vegetables lying unearthed in the garden, and on every counter and surface the hordes of daily disjecta that taken together constitute this man’s life. These conditions may sound not at all unusual for a stage play, but McPherson’s trick (or rather his triumph) is to keep everything—set, text, and performance—one step away from the level of filth that becomes dramatic by default. Squalor on stage or film possesses its own sort of glory, and McPherson’s study is not in the glorious, but rather in the ways we make do from day to day, the need that crouches inside us raw and eternal even when everything else seems perishable.

The play is deliberately evasive—there is violence (occasionally shocking violence), and fear and death and lust, but at the end we are left with the uneasy feeling that nothing has been gained. And this is deeply unsettling. As theatergoers, we can take anything that comes, be it good or bad, assured in the knowledge that whatever befalls will bring about change. Whether for the better or the worse sometimes doesn’t matter, for the fundamental principle is upheld that things happen and our lives move forward. There is, if not a reason, a motion; and that in the end is what matters to us. All of the lives on display in this piece have come unmoored in one way or another, and by the time we reach the end, it isn’t clear that they’ve drifted any closer to shore. They, as well as the audience, remain one step away from any solid truth—unable to grasp the thing that would make their lives work, or even to grasp what exactly that thing might be.

Hinds is well-tuned and endearingly scuzzy, with his obsolete mustaches and apparently rarely-washed soccer jersey. Michael McElhatton as his best friend Doc does an exceptional job; officially diagnosed as five-to-seven seconds slower the average person, he ambles cheerily about the stage with a sedate smile plastered to his face, like a dog with a broken leg who’s had it so long he no longer notices. Much depends here on the rapport of these two men, and the actors find a satisfying groove together. Perhaps the standout performance of the night was that of Brian Gleeson, who as the violent and mentally-ill young Kenneth jitters and starts across the stage like a broken toy, the spring compressed but the coil mangled so that his energy has got nowhere to go. His is a sharp example of the lives one scuff beyond ever regaining their sheen that McPherson is so adept at rendering. Nothing is ever really resolved, life goes on (if we can call it life), all of us stuck together in the same room, peering through a dirty curtain at the light.