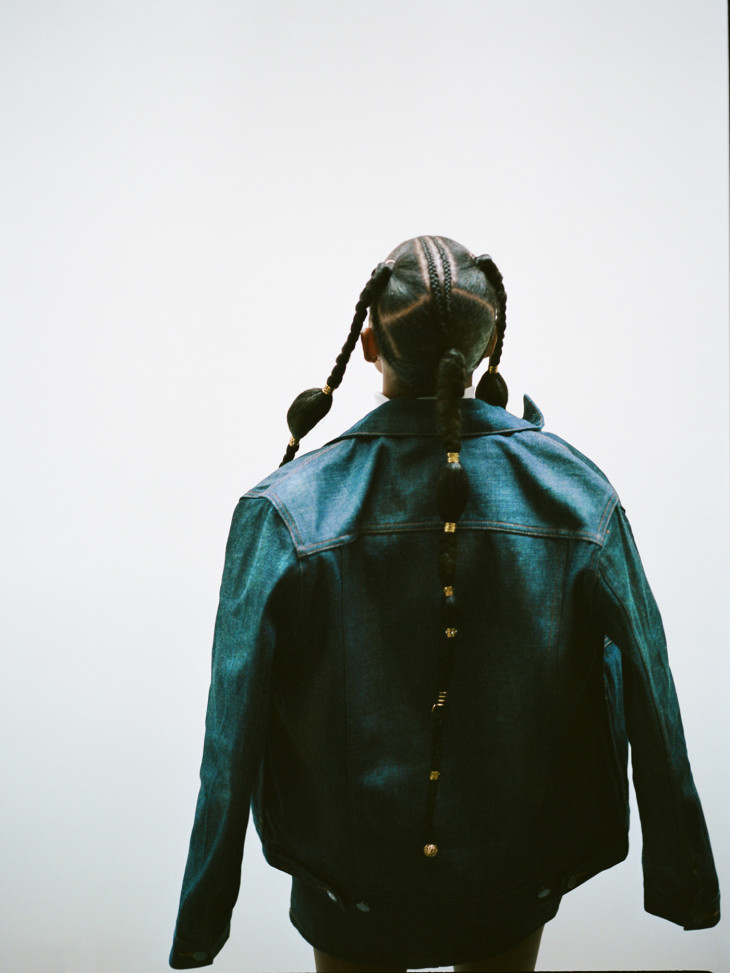 Jacket and skirt by A.P.C. Turtleneck by Uniqlo.

Styling by Taryn Bensky. Makeup by Asami Matsuda at Artlist.

In her début performance at Coachella last weekend, DeJ Loaf had a good time. “If you feel free, you should lift your hands,” she sang from the title track of her upcoming album, Liberated, beneath an iridescent Chanel visor that covered most of her face. Behind her, a backdrop of date palms soared and swayed. Next to her, Leon Bridges shuffled around the stage, singing along with her, “People, get liberated!”

Her voice was rich and honeyed and decorated with a Detroit drawl; when she rapped, it punched; when she sang, it seduced. The crowd had no problem obeying her and Bridges’s plea.

The performance was a strong contrast to her offstage persona, where, away from the microphone, sometimes she speaks so quietly it can be difficult to hear her if there’s background noise. For someone who commands such a presence on stage and whose sense of fashion carries such bravado—at Coachella, her hair reached beyond her waist and she wore a translucent top so rosy it outshone every shade in Janelle Monáe’s video for “PYNK”—it’s surprising to hear the 27-year-old musician describe her younger self as a “shy kid.” Left: Shirt by MM6. Trousers by Linder. Leggings and boots, stylist’s
own. All jewelry throughout, talent’s own.
Right: All clothing by A.P.C.

Indeed, the way she tells it, she mostly kept to herself when younger. Born Deja Trimble—her stage name comes from a mix of “Deja,” shortened, and “loafer,” her footwear of choice—she grew up on the east side of Detroit. She was raised around music: Her mother and her grandmother would put on Mary J Blige and Erykah Badu; her dad, before he was killed when she was four, would play her Miles Davis and 2Pac. Writing music, as a child, was an “escape,” almost like a diary. Eventually, she says, the songwriting “just gradually grew and I was like, Yo, this is what I want to do.”

After graduating high school in 2009, Trimble enrolled in nursing at a state school in Michigan and worked as a janitor briefly, but eventually realized that music was where she wanted to put her energy. “It wasn’t that I never wanted to do music. I always wanted to do it, but I just felt shy, you know what I mean?” she says. “I wasn’t being as free as I should’ve been.” As any artist knows, life experiences can produce good art. “I don’t like it when kids are like that,” she says, referring to her younger self who, she feels, held back, which explains the carpe diem attitude that underpins her songs. In 2012, she released her first mixtape, Just Do It; she starts the title track off with “Let’s do this shit, man,” and calls for “Nike life living” in the verse. In 2014, she debuted “Try Me,” an atmospheric pop/rap record produced by fellow Michigan native and BMI Award-winning producer DDS. The song, which marked her entrance to the scene—Wiz Khalifa released his own remix of the song and Drake gave it his seal of approval via Instagram—is laced with attitude, but it’s attitude born from experience, not arrogance. “Try me, try me/I’mma get his whole mothafuckin’ family,” she goads.

Liberated represents the next stage in her growth: the arrival of an artist who knows a little more about what she wants in life—or at least how she’s going to achieve it. Trimble, who works better alone, retreated to her current home base of Atlanta, where her mother and siblings also live, to write the LP. It took her a year and a half. “I just wanted to take a break and really focus on music,” she says. Given the vagaries of the creative process, it seems like she needed it. Of her writing process, she says, “Sometimes it starts with melody and then it goes on with your thoughts, sometimes it’s chords first, or sometimes it’s rapper’s verse. You never know, it might go any type of way.” The time also allowed her space to develop her music further, thanks to newfound resources such as working with Grammy-nominee Ricky Reed, the executive producer for the album. “Even before my first mixtape, I had tons of songs, but I just didn’t know how to orchestrate them,” she says. The result breaks expectations of the kind of music a female rapper should deliver. “No Fear,” the first single from Liberated, is infectiously, undeniably pop—an evolution in her grander musical scheme. (Another track from Liberated, “Changes,” makes this explicit: “I’ve been going through changes,” she sings over a brash trumpet hook, before rapping the verses.) The music video for “No Fear,” produced by New York directing company Rubberband, features her riding a flying bed along a highway. Shot against the vast expanse of the California desert, there is a casual, unchoreographed feel to it—“I didn’t want it to be just a dance video, I wanted it to be free,” she says.

Ultimately, she says, “I want my music to touch everybody,” meaning those outside her assigned genre. Ostensibly, “No Fear” is about a relationship, but its overall message is “be fearless, just do it,” she says. Liberated both inspires and evokes a certain joie de vivre; go for your dreams, but also, don’t forget to enjoy life on the way. (When asked about a commercial she recently filmed for Cîroc, the Diddy-promoted vodka brand, she laughs and says, “There ain’t no party like a Diddy party, right? It’s super true.”) It’s perhaps this relatable type of aspiration that marks her as an artist who has a message, and not simply enviable skill. On “Changes,” she raps: “If you ain’t chasing your dreams what the fuck are you doin’/Tell me how is that fun.”

DeJ Loaf returns for the second weekend of Coachella on Sunday. Styling by Taryn Bensky. Makeup by Asami Matsuda at Artlist.