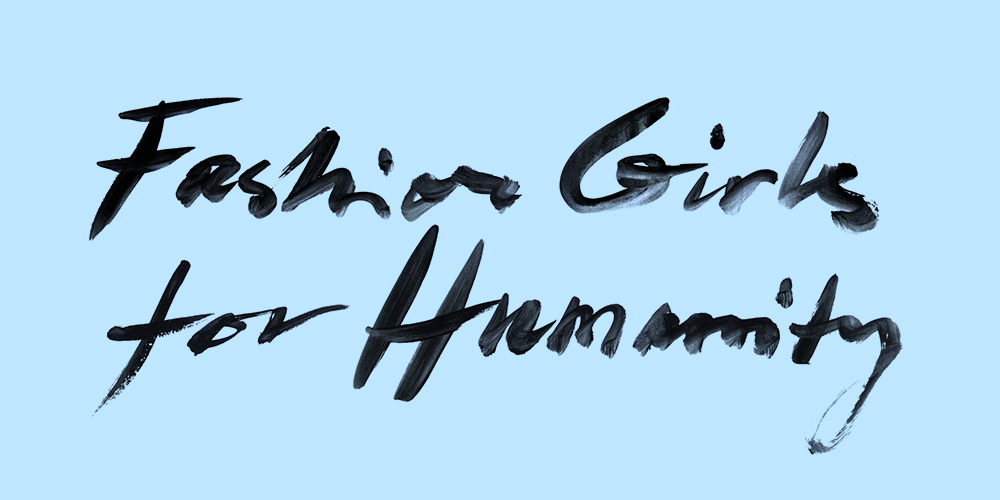 Creatives are a fickle type, and they’re not without their convictions. Fashion—high fashion in particular—is of a breed of its own, and rightfully so. The market is one in which exclusivity is a core component, a give-and-take in which widespread distribution carries with it a certain risk of guilt by association. Even philanthropic efforts had, until recently, their own political complexity, requiring that givers keep an eye on both the cause and the community behind it.

Fashion Girls for Humanity has made significant strides in overcoming this complexity, creating a remarkable track record in the process. Founded in the wake of the 2011 earthquake in east Japan by four fashion executives—Kikka Hanazawa, Tomoko Ogura, Julie Gilhart, and Miki Higasa—Fashion Girls for Humanity has become the rallying point for philanthropic efforts in the industry, raising millions for various causes along the way. As curatorial as they are effective, the team stands as the center point around which a global network of fashion-industry professionals gather to use their abilities for social good.

The key role, explains Hanazawa, who also serves as CEO of New York–based fashion line VPL, is to exist as an outlet for the various components necessary for each effort, not the dictator of such. “We’re spontaneous. We always talk about sustainability and social enterprise. I think these things are really possible through fashion and clothes,” she explains. The effort from the beginning has been designed to allow everyone from designers to hotels, magazine editors, models, and those in between to get involved.

“When we did this for Japan, we were kind of surprised that the dynamic is there,” says Hanazawa, noting that the fashion industry can be as fragmented as it is creative. “We realized that there’s something the fashion industry can do for humanitarian causes. After something like that happens, we have a feeling that we all want to come together to do something.” The sixty designers who gathered at the Bowery Hotel for the organization’s first effort included everyone from Alexander Wang to Diane von Furstenberg, Lazaro Hernandez and Jack McCullough of Proenza Schouler to Phillip Lim, along with two thousand supportive shoppers. The end result? $270,000 raised, a hundred percent of which was donated to organiza- tions including Japan Society’s Japan Earthquake Relief Fund and NYC’s Japan Earthquake and Tsunami Fund. A recent auction netted $115,000 for victims of last November’s typhoon in the Philippines. “We like to see tangible results,” says Hanazawa.

As Hanazawa notes, corporate-level labels like Ralph Lauren and Tory Burch are not without their own philanthropic arms, but young, rising designers—despite their popularity—are often without the resources needed to lead impactful charities. “It’s more organic or grassroots activities, really coming from the people who are much smaller,” Hanazawa explains. “We don’t have any agenda, no political motivation.” Fashion Girls has, in turn, nearly shed its own brand, absorbing the industry under its umbrella, and it continues to grow as more brands gather under its watch. The second benefit for the Japan tsunami, held in April 2012, attracted 120 designers and raised $140,000, for example, and a similar effort for Hurricane Sandy raised $180,000 through sales of designer goods in New York and Los Angeles.

This impact has created a demand of its own, and Fashion Girls’ next calling may ultimately be determining its own shape. Even for a young organization formed entirely of volunteers, a near-maternal expectation has begun to form. When disaster strikes, explains Hanazawa, “It has become that kind of organization, where people are like, ‘Are you guys doing anything?’ ” She continues, “We, as an industry, can hold demonstrations like musicians do. We can come together to show that there are things we can do together in a cool way, and in a cohesive way.”