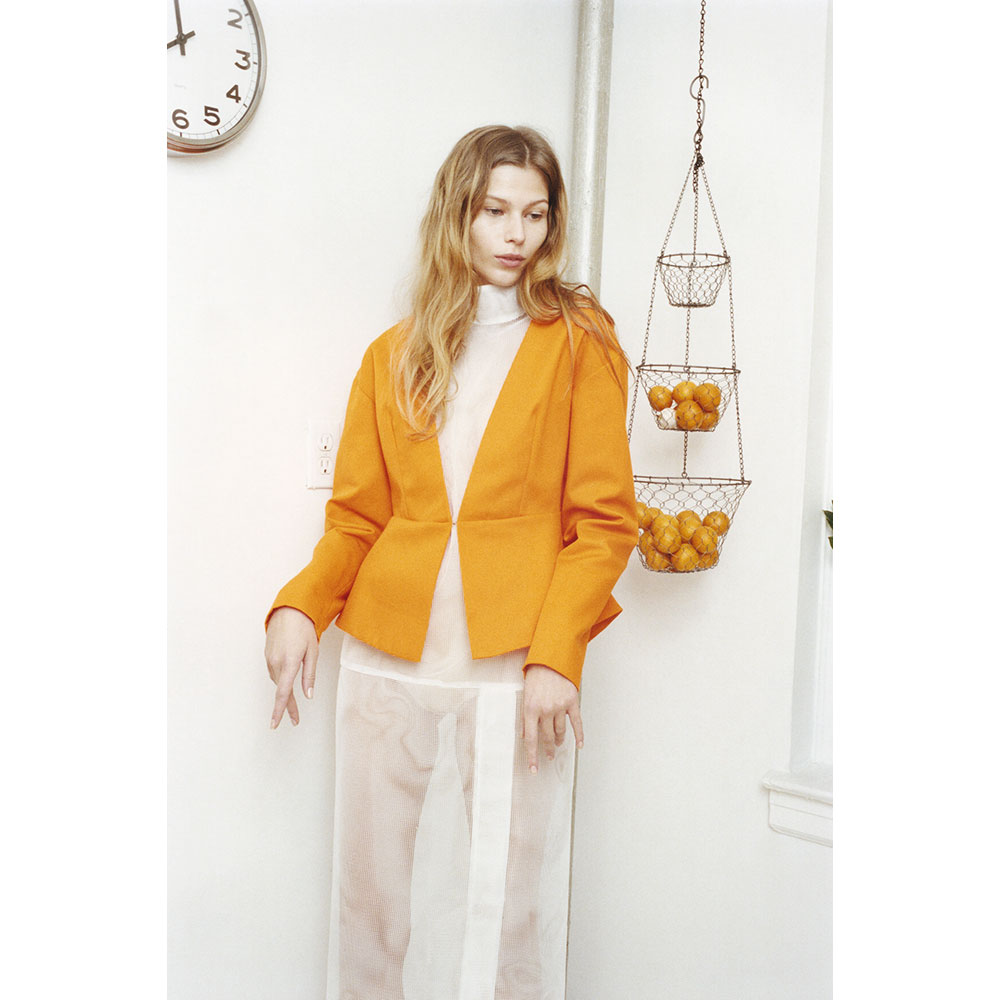 All clothing by Jacquemus.

Unlike most designers, Simon Porte Jacquemus wasn’t inspired to be a fashion designer because of a look he saw—instead, it stemmed from a feeling “of beauty and love to my mother, to my grandmother.”

Jacquemus, as his label reads, grew up in the south of France in Brame-Jean, between Marseille and Avignon. “Childhood for me was both my mum getting dressed and me playing in the fields,” he says. “Between the two, I loved dancing about with a Chipie pleated skirt. And I still dance during my spare time today.”

Creating “stories, not clothes,” the starting points of his collections are always his mother, the countryside, and childhood, with inspiration from films added along the way. For Spring 2013, for example, he looked to the “story of a woman at the end of the 1960s—workwear, homewear, mosquito nets, and surveillance cameras.”

It’s true he’s fond of a story, creating a film each season to accompany his lineups. Colored by his own experiences, these include “Le Sport 90,” featuring young love and its soundtrack (the personal stereo has a starring role), and “Le Chenil,” starring his muse Caroline de Maigret.

“I saw Caroline at a Margiela show and I fell in love with her beauty,” he praises. “Less than a month later we shot the film together. She played a lonely woman in the countryside, enchanted by her dogs, a kind of Brigitte Bardot character. The idea was it should be in between a documentary and Striptease. And also a bit scary.”

Jacquemus made the pilgrimage to Paris at the age of eighteen, after being told that success in the City of Light would cement his status worldwide. In the years since, he has found his path, in his own way. “My atelier is still at my place and I work a lot in the street on my iPhone, writing loads of notes and ideas,” he says. “I don’t have any rules or plans. The best experience so far was at the end of my first show. When I came out at the end to say hello, it was one of the greatest moments of my entire life.”

A dreamer and a rebel—“Can we dream without being a rebel?” he asks— Jacquemus’ style is pure and naïve, “because I’ve never been to fashion school,” he explains. “That’s the strength of Jacquemus. I make clothes as a child does drawings.”

Next up is the Fall 2013 show, his sophomore catwalk, plus the Spring film and a possible “big collaboration.” Does he feel pressure being a young designer showing in a city of establishment?

“Of course I’m stressed sometimes and I know that’ll continue,” he shares. “But I cannot do anything else. This is my only option, my only happiness. I’ve realized a dream.”