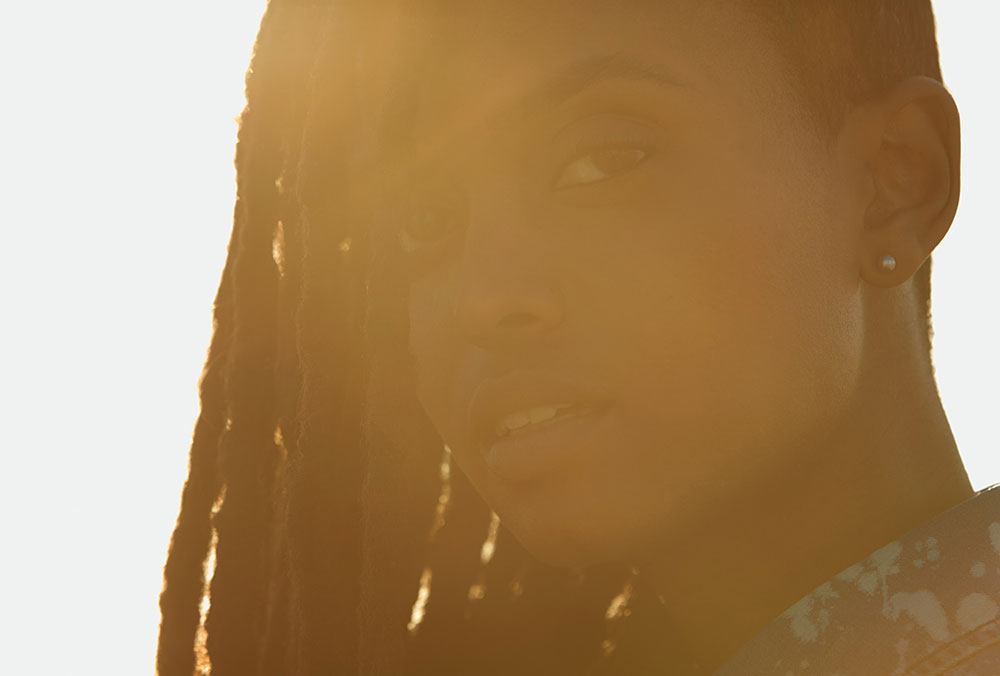 Fresh off her revolutionary Cut 4 Me mixtape from last year, we catch up with songstress Kelela, who is set to overthrow traditional notions of R&B with her dark, bold sound and raw lyrics.

In nearly every press photo that exists of Kelela, she’s looking right into the camera: head up, eyes focused, manifesting the same challenge with her stare that she does with her equally stunning music. In both, there is thoughtfulness and intent.

The thirty-year-old Los Angeles transplant—born Kelela Mizanekristos to a pair of Ethiopian immigrants in the suburbs of Washington, DC—has spent the past year at the center of a radical shift in R&B that is at once æsthetic and substantive. Her Cut 4  Me mixtape nearly broke the Internet upon its release thanks to next-level buzz, and her signature style of intellectual-yet-emotional electronic R&B resonates strongly with fans and the press, shattering the implied boundaries that have long dictated the genre’s norms and defined its audience.

“My idea for the project was drawing a line between this kind of down-home vocal performance and connecting the dots with innovative electronic music, innovative club music,” she says, describing the genesis of the landscape-shifting Cut 4 Me.

A couple of features, including vocals on Kingdom’s “Bank Head” and Teengirl Fantasy’s “EFX,” came first, landing Kelela an opportune spot opening for Solange Knowles’ North American tour last year. A supremely timed traffic accident totaled her car and earned her a sizable insurance check, which helped fund a freeing departure from a call-center day job to work on music full-time. Then came the real grind: molding a sufficiently progressive sound to complement her evocative, idiosyncratic voice and heart-wrenching writing.

The formula behind her success comes in the form of broad collaboration with sister collectives Fade to Mind and Night Slugs, respectively denizens of Los Angeles and London rave-wave best known for moving dancefloors in unprecedented ways with their knack for ice-cold, skittish sounds matched with stomach-churning bass. Some of the scene’s defining producers (Bok Bok, Kingdom, Nguzunguzu, Morri$, and Jam City) are responsible for Cut 4 Me’s production, with each having contributed a couple of tracks. It’s warehouse-themed music, shaped indelibly by the landscape of downtown Los Angeles and the creeping paranoia of London at night—a perfect and unlikely fit.

“I’m attracted to a lot of the most minimal beats. My approach to innovation, or what sounds innovative to me right now anyway, is minimalism in production. I like abrasive and hard, heavy sounds. And drum patterns that aren’t necessarily typical or chord changes that are resonant,” explains Kelela.

The sound she describes, and the producers behind it, are vital entities on their own, but Kelela turns the movement on its head, introducing a challenging push-and-pull between a purely digital bedrock and her own raw vocals. Songs like “Enemy” and the titular “Cut 4 Me,” produced by Nguzunguzu and Kingdom, respectively, feel like a platform-booted kick to the gut, thanks in large part to the palpable defiance of logic of Kelela’s voice over seemingly incongruous bleeps and bloops.

“I think I see my job as a vocalist as taking something that’s not intuitive in the track and making it sound really intuitive to sort of anchor you with my vocal,” she says.

And it’s true. Cut 4 Me’s success lies in the unexpected weight it carries; personal lyrics like “You should stop the fronting before I catch you in a lie/You forget my name but you say it every night” from “Floor Show” are delivered with a yearning that reverberates from mind to body. Listening, you want to cry or dance or both. Either way, you feel.

“It’s terrifying, but I took the risk. I did it because there’s something better on the other side,” says Kelela of the personal nature of her writing. “It’s not about getting praised for taking the risk, it’s not the reinforcement that comes with that, it’s the relief that you experience as soon as you write it down. It’s about the moment it was shared, not when it was received.”

But beyond her own ambitions, Kelela knows exactly what her role has been as so-called “alternative” R&B claws its way from the underground to the mainstream. What she’s less sure about is how the circumstances came to make it so.

“I’m not sure what the economic and social conditions are that created this moment of everyone all of a sudden being like, This is the tightest shit right now. I don’t know what happened, but definitely white people, middle-class white people, are finding R&B music valuable right now. There’s a little appropriation, but I’m down with it because it means more people like me can make a living. I’m implicated,” she acknowledges.

The social and artistic implications she speaks of are relevant cornerstones to her self-definition, musical and otherwise. It’s a sound and ethos that, if the ripple effect she’s triggered is anything to go by, will likely come to populate more mainstream spaces. It  also ties into her seeming fascination with duality: body and mind, insider and outsider, personal and abstract, familiar and absolutely brand-new.

As for the lines she plans to draw on her next project, a yet-to-be-defined, still-amorphous official debut album that’s now in the works, this is Kelela’s promise: “I’m making sure that the tracks are fucked up and that you’re fucked up by the tracks.”